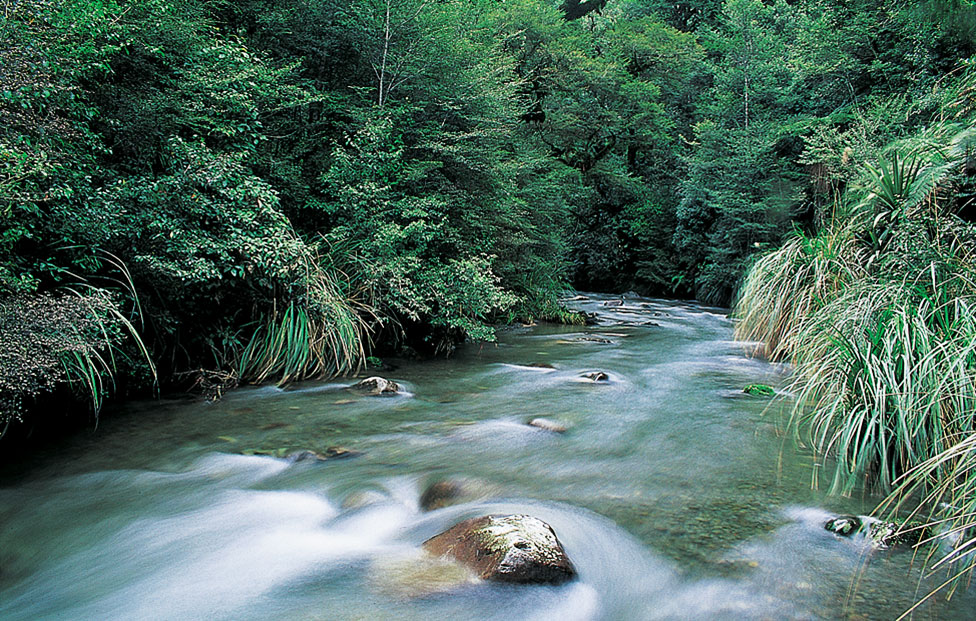 This is a less well-known but pleasant two-day tramp to Upper Whirinaki Hut, in the southwestern corner of Whiri­naki Forest Park. It’s a fairly easy round trip, with undulating bush tracks, no major climbs and one section of river travel. The tramp is usually quiet and there are good opportunities to see blue duck in the river section.

From the carpark at the end of Plateau Road, a well-benched track winds its way around a bush ridge towards the Whirinaki River. Beech forest dominates here, with occa­sional podocarps breaking the uniformity of the canopy. Large mountain cabbage trees, or ti toi, frequently hang like umbrel­las over the track. After a couple of hours you reach the main Whirinaki River at a footbridge. Nearby caves marked on the map are accessible as a short side trip, the larger one harbour­ing glow-worms.

At the track junction after the foot bridge, head upstream. The track now meanders, crossing the river in places that are mostly shallow and easily forded. This easy tramping leaves plenty of energy to listen out for the kaka and kakariki, or perhaps for contemplation of the surrounding topography.

whirinaki is essentially a heavily dissected landscape lying between the plains of the kaingaroa to the west and the fault mountains of Te urewera National Park to the east. Covering the underlying ignimbrite and greywacke are layers of pumice and ash, the latter having been emitted during the 1995–96 ruapehu eruptions. These were minor episodes in the area’s long history of vulcanism. When Taupo last erupted around 186 AD, the Chinese noted the explosion, and it remains the largest known eruption in recorded history.

About 2 kilometres upstream of the swingbridge, there’s a four-way track junction. To the east lies Upper Whirinaki Hut, now just a 20-minute amble away up a small tributary of the main river. The tidy hut is situated at the far end of a grassy clearing, and has nine bunks and a woodstove.

On the final day, trace your route back to the track junc­tion. Take the signposted track leading to Plateau Road, which climbs briskly up onto a bush ridge. While this is a rougher trail than the well-maintained and benched track of the first leg of the tramp, it offers a good way to complete the round trip.