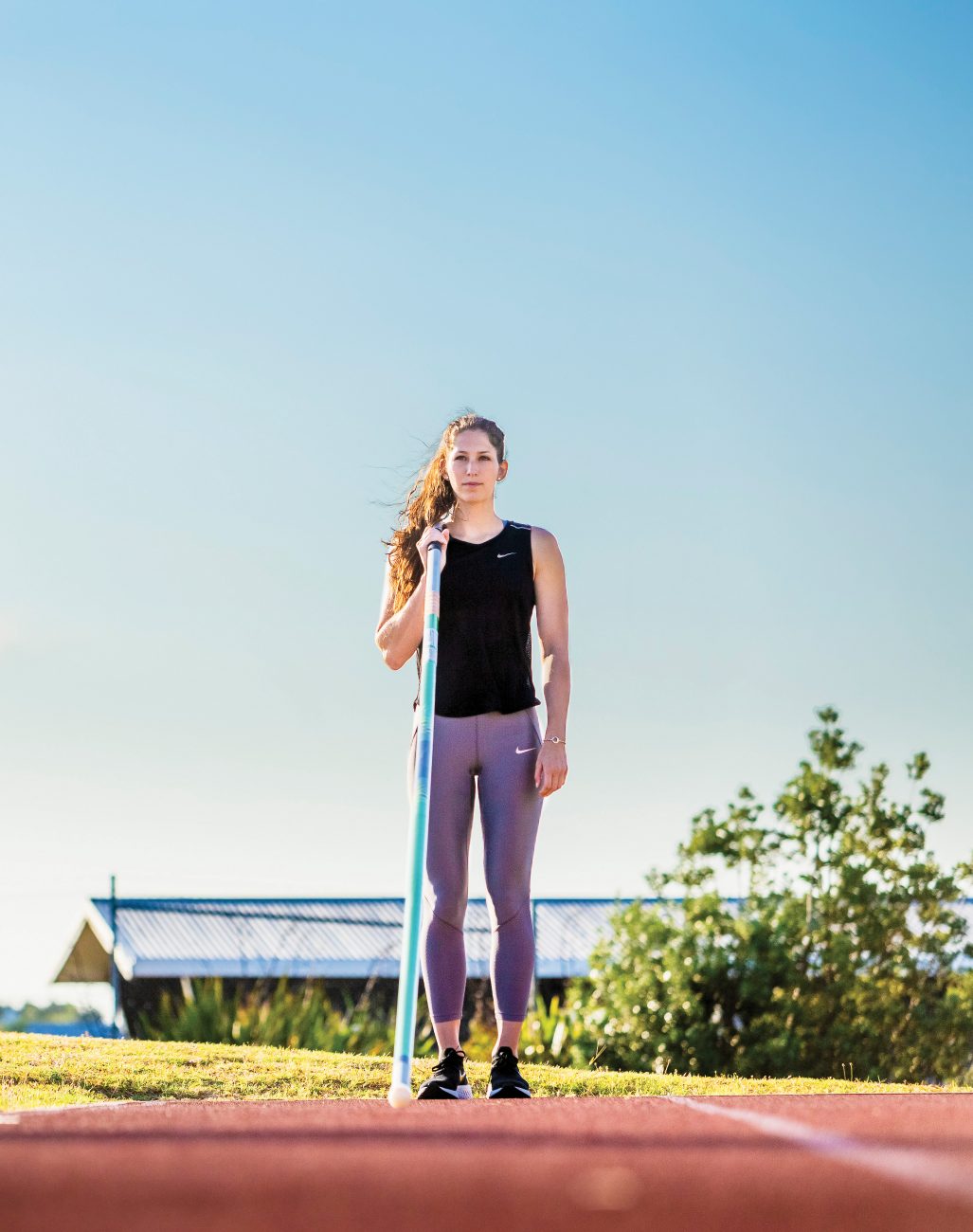 Pole vault is a sport of conjurors. The best vaulters summon energy from earth and muscle and channel it into a pole. Then they leap, and with a series of precise, fluid motions, they call that power back into themselves. They fly.

It’s not magic, of course. It’s a body working fit to bust. You’ve got to be fast, says Olympic bronze medallist Eliza McCartney. “You’ve got to be strong on the ground, but then you’ve also got to be mobile and spatially aware.”

It begins with the run-up. Actually, no. It begins with a decision about how long the run-up will be. A shorter run is less taxing but generates less energy. Bouncing back from the Achilles injury that stopped her vaulting between August and January, McCartney’s just made the call to go long, stretching her 14-step run out to 18.

“It’s already so much better than any other run-up I’ve used.”

The surge she gained from those extra four steps has pushed her up a pole size and that, in itself, pushes her higher. But much of the secret of a sweet jump still comes down to the human body and how fast it can run.

First six steps: ease into the acceleration. Next six: solidify the speed. Bump it up if you can. Really go for it. Finally: maintain speed. Keep the steps short and knees high—all the better for pouring energy into the pole, which you’re lowering, gradually, ready to plant into the box.

Now this you want to do as smoothly as you can. No jolts, no jarring. Two steps out and you’ll know whether you’ve nailed it. And plant.

Here comes the air. It’s the bit McCartney’s best at: takeoff. And it is like a plane on a runway—you must avoid the temptation to jump and instead, kiss goodbye to the ground with a quick, flat stamp and a straight leg. You want to be rigid. You want to be the pole.

Now you want it to bend, bend as far as it possibly can. So, you pull. Like you’re a gymnast on a high bar, working up to a huge swing. It’s your core and your upper body versus carbon fibre and fibreglass: pull. And—now—the pole will begin to flick up and a second later, you are elastic, you are whipping your arms forward, hauling your legs up. You’re parallel with the pole, pushing off the top of it. And now? Now you are flying.

Watch McCartney in competition and you’ll notice that before all of that—before the furious acceleration, the quick-as-a-whip swing, the glorious bolt of energy converted and transferred—she talks to herself. At length.

What’s she saying? Often, it’s simple: “I will break barriers.”

In women’s pole vaulting five metres is the magic mark, akin to the four-minute mile. Russia’s Yelena Isinbayeva cleared it first. That was 10 years ago. In 2016, Americans Jennifer Suhr and Sandi Morris cracked it, too. And McCartney? Her personal best is now 4.94 metres. If her recent trajectory holds, she’ll be over five metres in a matter of months.

“I’m so close. I’ve been looking at it for so long and it’s just tantalisingly close.”

It’s so close, actually, that it’s almost a given. She’s all but done it already, a few times, just giving the bar a “silly” nudge with her arms or chest on the way down. So close. She must be contemplating what comes next: the world record, and a bar set just seven centimetres higher.

“Absolutely,” McCartney says. “It’s something we’ve talked about for years.”

By we, she means her coach, Jeremy McColl.

And after the world record?

McColl believes 5.20 metres is “something that could happen”, she says. McCartney’s less inclined to pin down a number. She just wants to jump higher, to jump and jump and keep getting better.

“The exciting thing is that I feel like I’m not even close to being at my peak.”

Touch wood she’s got another 10 years. And she’s got the men in her sights. Yes, biology is in play. But why, McCartney wonders, should a man who isn’t any bigger, or stronger, or taller than she is consistently jump higher? The best male vaulters will pop over 5.5 metres, no worries. Their world record is 6.16 metres. That’s more than a metre higher than the women and it doesn’t sit well.

“I think that we can get much closer than we are, I really do. We haven’t pushed the boundaries yet. We’ve still got more to do.”