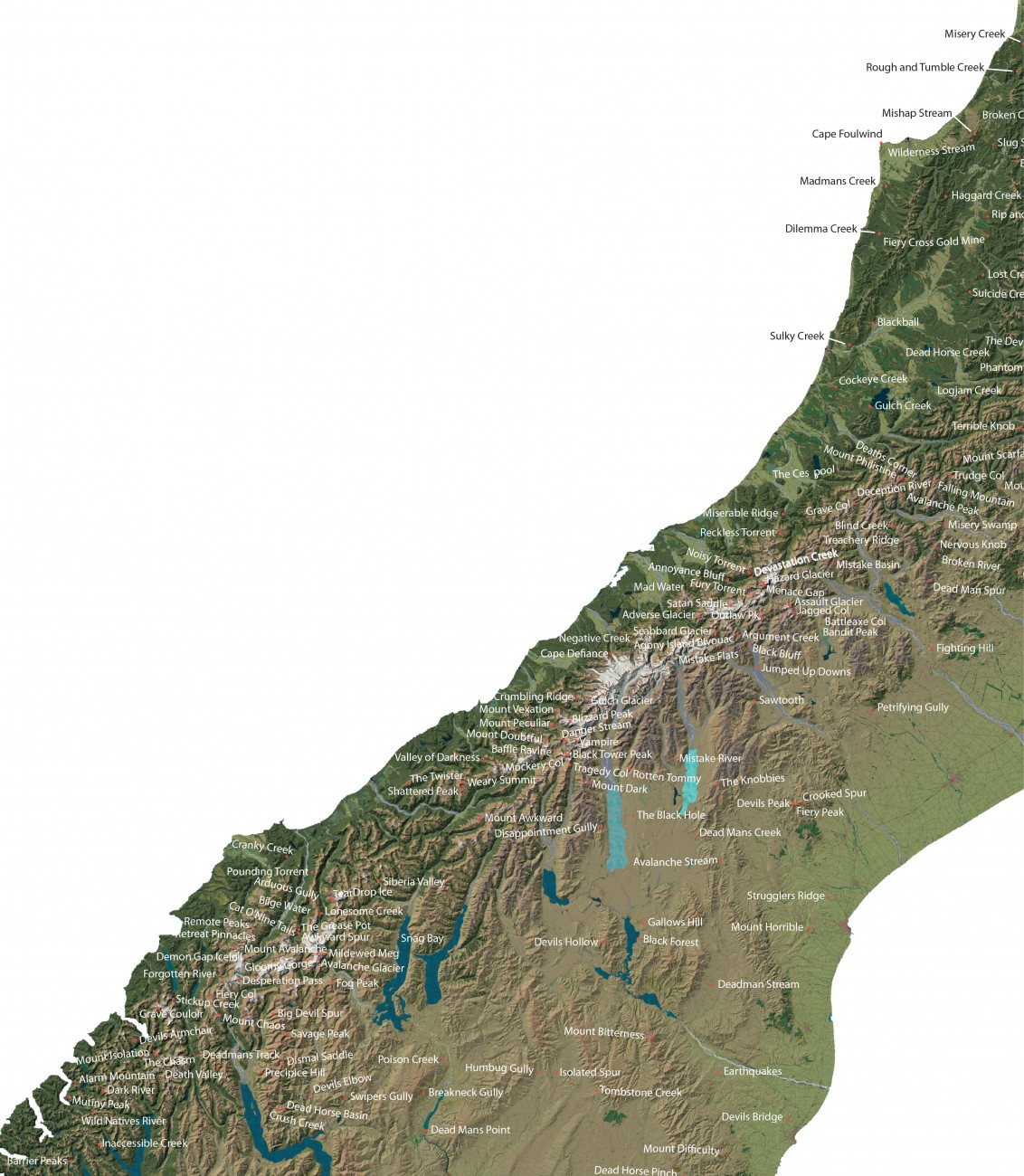 As far as mythical generalisations go, New Zealand has two contradictory ver­sions of itself. There’s the one about this being a slice of paradise populated by a determined and stoic people. The other is that this is a damp and brooding land pop­ulated by people wallowing in rain-soaked melancholy. The truth undoubtedly lies somewhere in the middle, although in the process of producing maps for this maga­zine, our attention has been drawn to a considerable amount of evidence for the latter—the psychology of our forebears is embedded in our geography.

You may be familiar with Doubtful Sound, Cape Foulwind and Mount Diffi­culty, but the country is riddled with nat­ural features named by people who evi­dently saw this land as more hell on Earth than godzone. This is particularly so in the South Island, as manifested in a number of mountains, such as Mount Awkward, Mount Misery, Mount Bitterness, Mount Hopeless, Mount Awful, Mount Dreadful and Mount Horrible.

Look closely at a map of the region and you get the sense that injury, if not the grim reaper, lurks around every corner—as in Breakneck Gully, Broken Leg Knob and at least three Deadman’s Points. There are landforms registering profound regret—Mistake River, Mistake Basin, Black’s Mistake, My Mis­take (an address on Mt Mis­take Rd) and Boo Boo Stream. Several waterways were clearly the object of considerable ire—Horrible Stream, Slug Stream, Cranky Creek and Stink Creek.

We aren’t the first to have noticed this—these markers of pioneer malaise prompted cartographer Roger Smith, of GeographX, to produce A Visitor’s Guide to Dubious, Dodgy & Dangerous Destina­tions of the South Island a few years ago. Smith says he’d considered doing such a map of the whole country, but the North Island didn’t have enough unhappily named landforms to justify it. Because the North Island is a nicer place to be? Smith suggests a more banal explanation. The North Island’s geographical sites already had a lot of Maori names while “the South Island had more than its fair share of dour old Scottish surveyors with a droll sense of humour”.