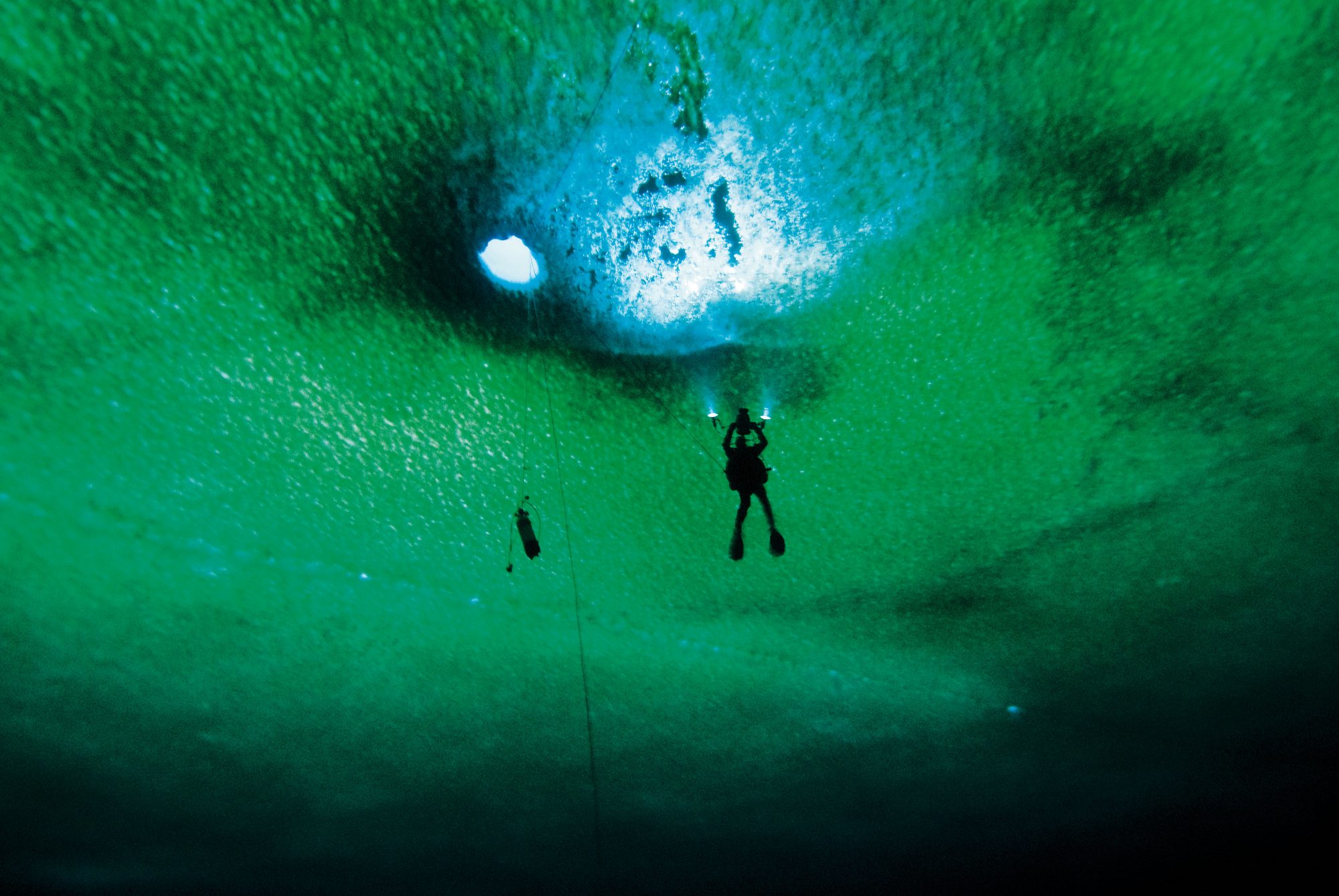 Tents Huddle on the ice shelf beneath a bone-chilling katabatic wind tumbling down from the polar plateau. Inside, dive-trained sci­entists crouch over a metre-wide hole in the ice, staring into the world beyond.

Weeks earlier, the team bored a series of holes in the ice with a 30 cm drill bit, prospecting with a tiny camera to find target species and satisfactory seafloor topography. Then a heated metal tube filled with glycol and water was dropped down to widen the portal to the underworld—a somewhat more gentle approach than the sticks of dyna­mite that were used by the Russians and Americans in pre­vious decades. At 1.2 m across, it was wide enough for a diver to fit through. The icy underworld beckoned.

Creatures under the Antarctic ice inhabit one of the most extreme environments on the planet. To enter their realm, human divers must prepare for hours.

A diesel heater blazes away inside the tent as the divers slowly assemble and check their gear. In this line of work, frozen equipment can mean instant disaster. As freshwater freezes faster than saltwater, the layer of melt-water filling the holes must also be siphoned off before the equipment is taken under the ice.

Divers coming from New Zealand must first do a win­ter apprenticeship at the frozen Lake Alta, nestled in The Remarkables in Central Otago, before they hit the real deal under Antarctic ice. They practise controlling their buoyancy, dealing with the shock of the cold and keep­ing the claustrophobia of diving under an impenetrable ice shelf at bay. However, the nightmare scenario of los­ing sight of the exit hole and remaining sealed under for eternity is almost nil. Divers for New Zealand-directed projects in Antarctica must always remain tethered, and the hole above blazes like the sun in a sky of luminous green ice—you just can’t miss it.

An emergency hole is created about 50 metres away from the operating hole in case of a visit from a Weddell seal—there’s no squeezing past a three-metre, half-tonne lump of blubber casually blocking the exit.

Like a sleeping bag inside a tyre, the drysuits and associ­ated paraphernalia make getting about on land almost im­possible—divers struggle to put on their own gloves and fins.

When ready, they slide one by one into the underworld, the cold numbing their lips and piercing the skull like nee­dles. Air sloshes through the drysuits and the divers twist and turn within their cocoons to move it up to the relief valve on their shoulders—a constant battle against their own buoyancy.

Above the two-metre-thick slab of ice, the landscape is devoid of colour. But beneath, Antarctica hides an alter-ego.

The underside of the ice is painted emerald with algae, textured with lime-green and jade rivulets. And on the seafloor, nemertean worms thread between algae-covered boulders like old stockings.

Up to three metres long and covered in a sheath of highly acidic mucus which they se­crete to deter predators, these worms harpoon their prey with retractable barbed proboscises, and compete with cherry-red sea stars to scavenge the rare food bonanza of­fered by the occasional carcass.

If prey is too large for the mouths of the omnivorous sea stars (Odontaster validus), this is no problem; they sim­ply “evert” their stomachs to digest food outside their bodies. They pile up in the hundreds upon a food source, jostling for space in a slow-motion feeding frenzy.

Sea urchins (Sterechinus neumayeri) also punctuate the landscape, and as the shelf falls away into the depths, volcano sponges abound with white silica skeletons spanning more than a metre across. 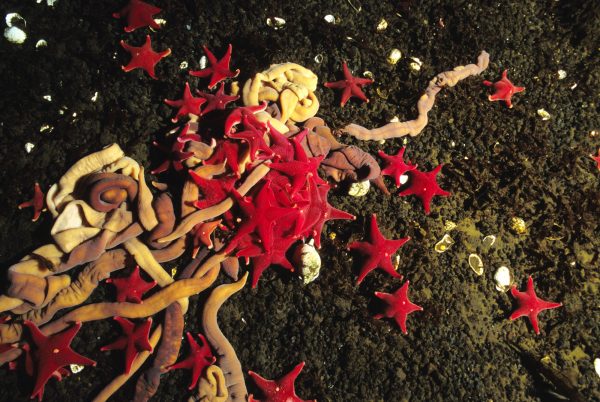 As the divers fin through the water, slivers of ice flick­er and float fairy-like through the vodka-clear water. This “anchor ice”, which is dispersed in clouds of glassy shards with any disturbance in the water, clings to any surface it settles on. Stalactites jut down from the ice ceiling like bro­ken teeth—hollow tubes formed when cold, briny water is excluded from sea ice and leaks down into the water column, instantly freezing the less-saline seawater surrounding it.

And everywhere, colour in profusion. The fluffy pink coral Alcyonium antarcticum gathers in groups on rocky out­crops. When disturbed, its polyps retract, morphing from a cloud of candyfloss to a knobbly stick. Anemones search the water column with fat, salmon-coloured tentacles and hydroids (soft coral-like animals) poke up on stalks, their fuzzy tops belying tentacles laden with stinging cells. More sponges, a kaleidoscope of reds, yellows and greens, contain powerful toxins to defend themselves—unique chemical cocktails which have disease-fighting applications in biomedical research.

Over this alien landscape tip-toe orange sea spiders (pyc­nogonids) that could span a dinner plate, with bodies so petite they even store a few internal organs inside their impossibly long, slender legs. A gigantic isopod, Glyptonotus antarcticus, growing up to 20 cm in length, trundles over the sediment like a miniature armoured tank, while ice fish—so-named for their transparent bodies—have adapted to the freezing con­ditions by trading in their haemoglobin (that would usually colour the flesh) for anti-freeze glycoproteins to prevent ice crystals from forming in the blood. Crinoids wave feathery Mardis Gras arms, waiting to snatch falling marine snow­ flakes of organic waste that constantly rain down from the upper layers of water—and large brown sea squirts (Cnemi­docarpa verrucosa) squat like a brass section in protected crev­ices in boulder fields, siphoning nanoplankton and detritus through flared openings in their sides.

This is the backdrop to some of the coolest science on the planet.

Project IceCUBE (Coastal Underwater Benthic Ecosys­tems) has been operating in Antarctica since 2001 and has been funded by the Ministry of Fisheries, the Foundation for Research, Science and Technology and the National In­stitute of Water and Atmospheric Research (NIWA). The study is critical to understanding the Antarctic ecosystem before the combined effects of ocean acidification, climate change, over-fishing and tourism take their toll.

Because of Antarctica’s geographical isolation and ex­treme conditions, more than 50 per cent of species found there are endemic, and just as many of those that are cur­rently known are yet to be described. The area covered by sea ice is the most productive region in the South Ocean, and importantly, circulates nutrients into the Pacific, Atlan­tic and Indian Oceans.

Scientific marine research in Antarctica began in the mid-19th century and has increased in the last half-century with ice-capable vessels, unmanned underwater cameras and scuba gear. It has become increasingly evident that life in Antarctica is highly regionalised and has more to do with the ebb and flow of sea ice than latitude.

When the sea ice breaks up in summer and the depths are exposed to sunlight, there is a rapid algal bloom that fuels the Antarctic food chain, stimulating a flurry of growth and activity over subsequent months.

The IceCUBE team have conducted experiments under the ice to analyse the effect this explosion of food has upon the structure of the ecosystem. NIWA marine ecolo­gist Drew Lohrer, with the help of the technical divers, set up 16 Plexiglass domes, each a quarter of a square metre in size, on the sea floor. They were completely sealed, with an aluminium base sunk about 10 cm into the sediment and portals on the sides through which in­struments could be inserted. Brittle stars were gathered from the surrounding ocean floor, where they predate on smaller animals (even their own young) or scavenge anything from diatoms to seal faeces. Five, 10 or 15 of the brittle stars (Ophionotus victoriae) were placed under each dome and hand-fed microalgae scooped from the ice ceiling.

The array of domes under the ice shelf, each with its weird leggy inhabitants, awash with shards of anchor ice, looks like a scene straight out of science fiction. But this is an experiment to establish scientific fact that may ac­curately describe the structure and performance of one of the most important bio-regions on the planet.

Dumping goops of slime into each dome simulates the pulse of algae that arrives every summer. Divers take sy­ringes of liquid from each dome—a tricky process when your fingers are numb and your mittens are impossibly clumsy—and rush them to the surface to be analysed. By measuring the changes in oxygen and nutrients, and the amount of algae remaining, Lohrer was able to determine how the sediment dwellers of the ecosystem influenced the overlying waters, and improve our understanding of the relationship between food producers and consumers.

But these relationships and interactions are also pro­foundly affected by ocean acidity, and because carbon di­oxide is more soluble in cold water, the worldwide increase in atmospheric carbon dioxide will mean that Antarctica’s oceans will acidify faster than anywhere else on the planet.

This could affect the ability of bivalves such as geoducks and scallops to build their calcium-fortified shells and may radically change the structure of the Antarctic ecosystem. This is of greatest concern to researchers, and none more so than NIWA scientists Vonda Cummings and Simon Thrush.

To understand how the ecosystem will respond to changing conditions, their team took core samples of sedi­ment from the sea floor and gauged the strength of un­der-ice currents and levels of light as the extent of sea ice changed. They added this information to measurements of water temperature, the thickness and duration of sea ice, the amount of snow covering the ice, and sea floor topog­raphy to take in every parameter of the under-ice habitat. Then, using video, they recorded the relative abundance and diversity of the species that lived there to build up a picture of life under the ice, and what affected it.

However, some of the best instruments for recording habitat change have already been faithfully recording the relative proportions of different algae under the ice for some time. Invertebrates such as scallops or sea urchins leave a record of their diet in the molecular signature of their tissue and shells. Using stable isotope analysis back in New Zea­land, scientists can map the diets of invertebrates throughout the region to determine their dependence on the different food sources which vary with sea ice conditions.

The work revealed that latitude south has little effect on the productivity of the Antarctic marine environment. Of greatest consequence is the presence of sea ice—ice that in some parts of Antarctica is disappearing year on year.

The species in Antarctica have adapted to survive conditions untenable for life elsewhere. Yet, these hardy, highly evolved species seem destined to be the first vic­tims of changing oceanic conditions. And as Antarctica is an engine room of bio-productivity that flushes the world’s oceans with nutrients, changes in this ecosystem will be felt everywhere. 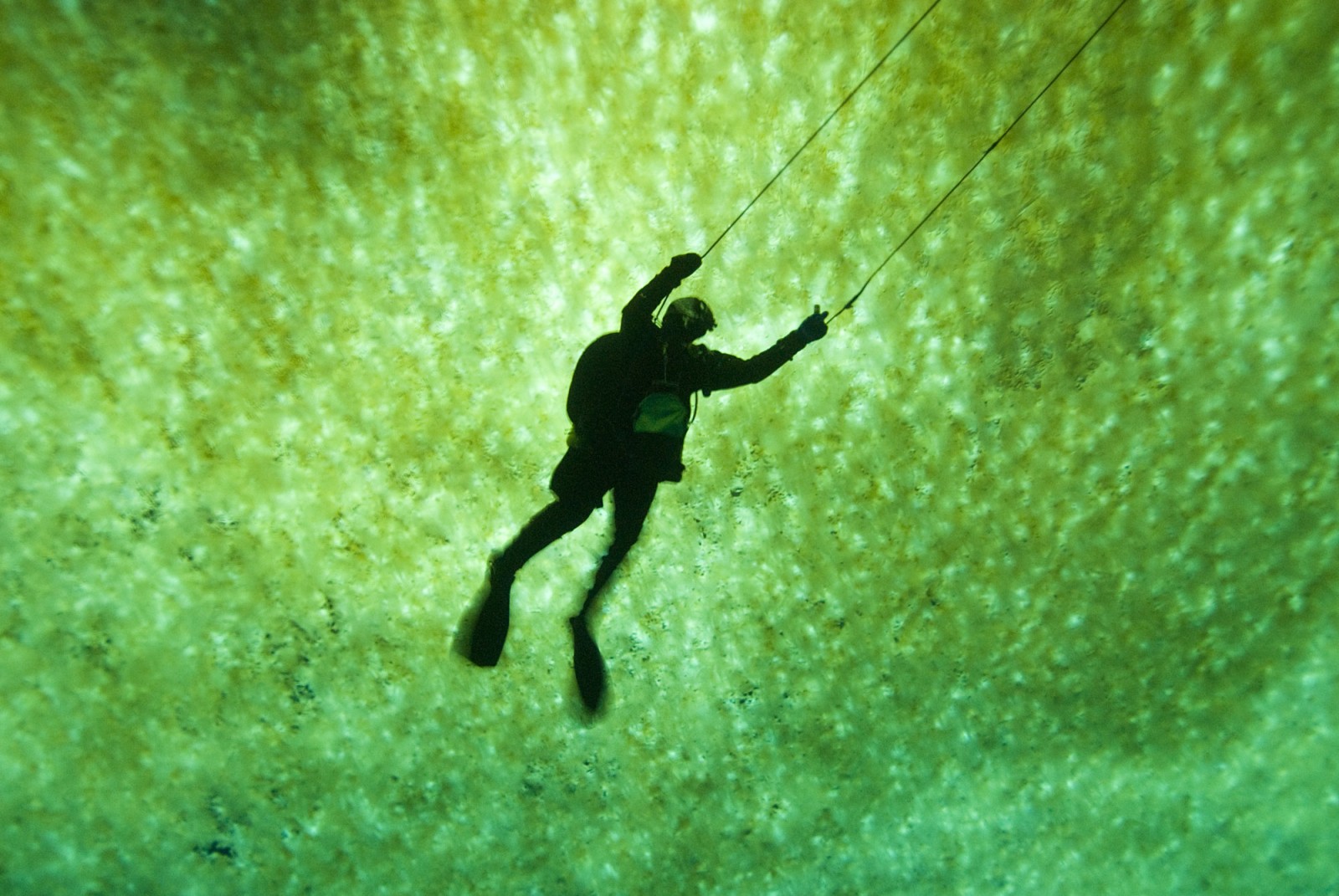 A taste for plastic