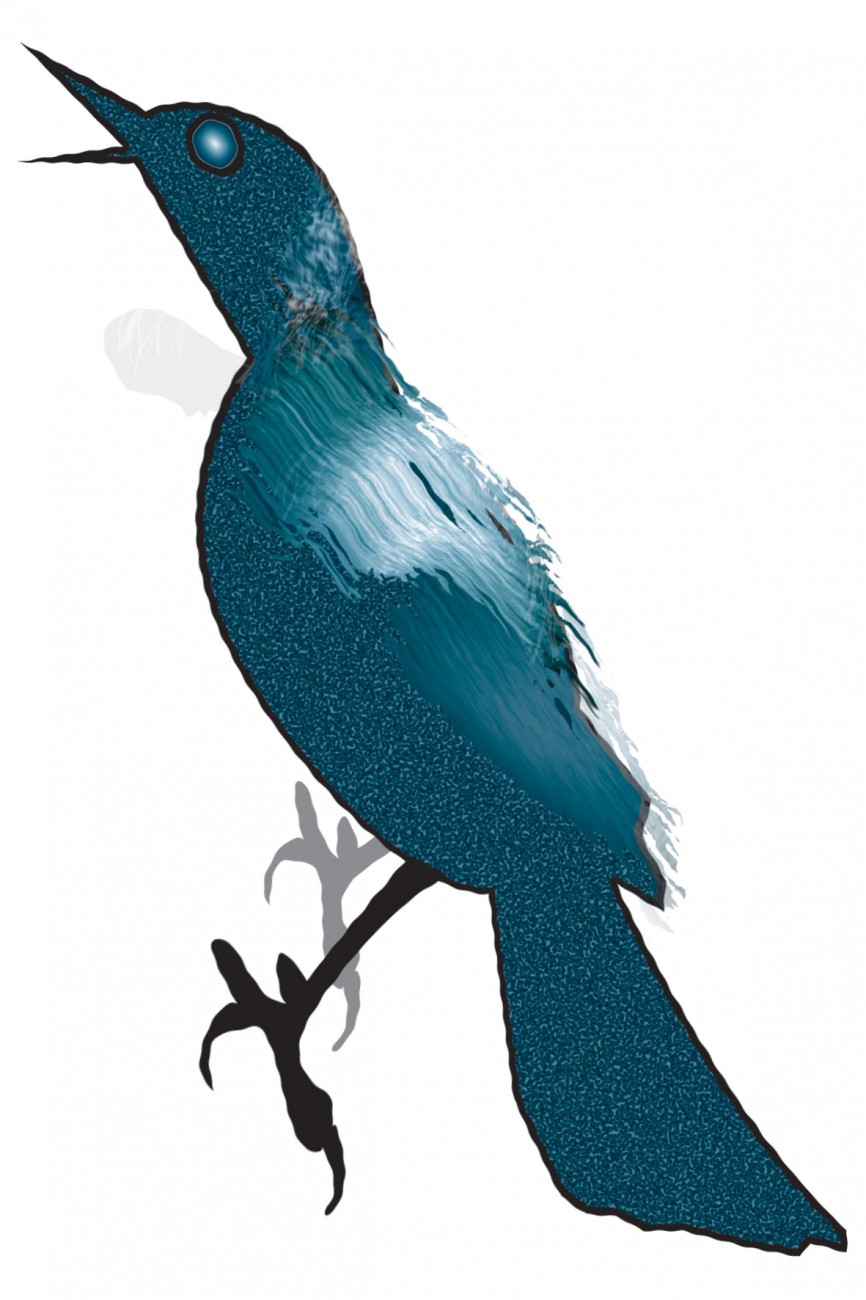 It all began with an Apple.

Mine makes a soft ‘purr’—that’s the name on the drop menu of Macintosh sound effects—to alert me to incoming email. Then one day, out of the blue, I started receiving phantom messages, a purr with no email. The device had somehow gotten it into its circuitry to purr just for the hell of it. I quickly dismissed a couple of the more interesting hypotheses: email from the other side; ghost in the machine—and concluded it was probably my spam filter eliminating junk mail after announcing its arrival.

But the truth is out there, and it WILL find you. Out there, in my case, was out there on a scaffold where I was painting the house. The arrival of an email was announced a few feet from my head… among the trees.

Now, I like to think I live in a tree house. It’s not actually built in a tree, but it is built into the canopy and that canopy is filled with birds. Kereru hooning around half drunk on fermented berries, various twittering songbirds, and the resident Mafioso—tuis, those sleek, enchanting, bullying, noisy passerines. And I turned to see one on a branch. It purred again.

Prosthemadera novaeseelandiae, with its white cravat and iridescent plumage, is a handsome bird and, owing to the quirk of a twin larynx, one that delights in the dexterity of its vocalisations. Its repertoire alternates between sweet chimes, raucous cackles, wheezes, clicks and the sound of creaking timber. Remarkable enough, but sometimes a tui gets it into his or her small-but-perfectly-formed head to master a new environmental sound. Helen, who lives with me in the tree house, owns a cellphone, and it too has been heard ringing in the trees.

Not that tuis need to imitate new sounds with all their natural acoustic gifts. These birds realised some time ago that Helen writes music and that they can insert their favourite themes and motifs into her work at will. Their control seemed to extend beyond her conscious mind into her subconscious, and on a few occasions she’s been little more than a conduit for their caprice. Helping her to compose was a major occupation for them, perhaps their defining occupation, until recently when something new arrived on the scene. A Citröen.

German cars are famous for precision engineering, Italian cars for their stylish lines, American for their size, while the Japanese automotive industry is like the Catholic Church, trying to be all things to all people. But the French? They make bread in sticks and have horns, kisses and condoms named after them. No one tells the French what to do, and that certainly includes how to make cars. If asked, and if they could be bothered responding, the French would likely describe their automobiles as ‘individual’, which as we all know is a sure-fire euphemism for eccentric. This one, for example, didn’t come with a jack—it came with hydraulics. But its pièce de résistance was in the form of dexterous vocalisations: a piercing sequence of notes for ‘remote lock’, another for ‘remote unlock’, and a real doozy for ‘unauthorised entry’.

Naturally the tuis took an instant shine to the Citröen, it being kin of some sort, right down to the iridescent metallic sheen. Within just a few days the car could be heard to be gleefully remote locking/unlocking from all directions. Then, maybe a week or so later, the alarm started to sound.

At first I had to check that there wasn’t a guy in a striped shirt and a black mask with a loot bag over his shoulder tiptoeing around the car to the sound of a xylophone. There wasn’t, of course, just the cackle of avian mirth in the surrounding foliage. In one masterly stroke the little devils had cast me in the role of one of those villagers in Aesop’s Boy Who Cried Wolf, turning my car into a liar that will now be ignored, even if it tells the truth.

And I know they’re not finished with me yet. There’s a whole world of vexatious imitations they have yet to experiment with: emergency sirens, blood curdling screams, cat fights (to upset the dog), other stuff I can’t imagine. And like Aesop’s fable, there’s bound to be a moral to this story too, though I’m not sure what it is. But I reckon if I had to come up with a slogan for that billboard campaign, mine would be: “Tuis. Just hatching eggs in those trees…yeah, right!”