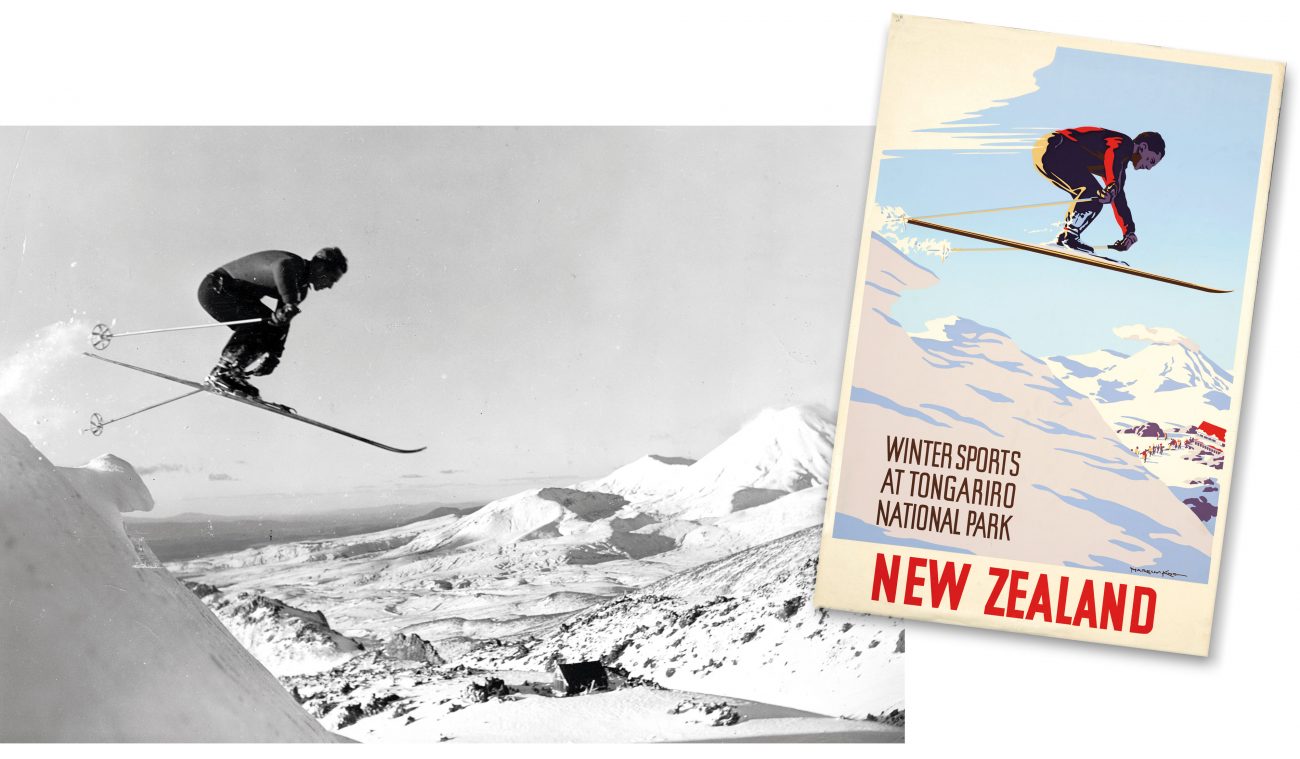 Cast in ink upon a poster from the 1930s, a skier soars, heroic and arrow-like, from a cornice of snow. Beneath his skis is a bustling ski hut, and in the background, the smoking stratovolcano of Ngauruhoe and the slumbering giant of Tongariro. The artist, Marcus King, sought to draw together the alpine attractions of the central North Island and the exotic notion of playing upon an active volcano­ signified in the image by Ngauruhoe’s signature plume of white steam, common at that time.

One can only imagine the sense of excitement that this image may have created in the mind of its English target market, perhaps more accustomed to slithering down gentle Scottish slopes upon thin snow, among the heather. But there was more to it than that, as there always is.

Recently, I discovered a photograph of a skier flying off Egmont Ridge, precisely as wrought by King. It noted that the skier was one Walter Haensli, a Swiss ski instructor instrumental in the establish­ment of Ruapehu Alpine Lifts, the company that popularised skiing in the North Island. The Tourism Department had unwittingly co-opted a European to promote New Zealand to Europeans, a coinci­dence that would only become more coincidental, at least as far as I was concerned.

Haensli later owned a poor-performing racehorse in New York with, coincidentally, my grandfather’s best man. Returning finally to his home town nestled in the turrets of the Swiss Alps, he maintained his connection with New Zealand, organising Swiss instructors to visit Ruapehu Ski Club every southern hemisphere winter. Coinciden­tally, many of those instructors lifted me from the snow during my first attempts at the sport.

But there’s another thread to this story. In 1927, my grandmother and her sister took up skiing on Ruapehu, perhaps drawn by similar promotional devices. Over a number of years they would endure a long and relatively arduous journey from Whanganui. The days were spent lugging heavy ski gear up hill—probably soaking and chilled in oil-skin jackets and boiled wool scarfs—to return late to warm themselves fireside in small wooden huts. When the Chateau was constructed in 1929 my grandmother, too, publicised our peaks­ photographed on Scoria Flat in a cardigan and plus-fours, standing with a carefully positioned pair of wooden skis and waving theatrically to friends, above the headline, “Come and enjoy yourself as you never have before.”

Like the image of Haensli sailing above the volcanoes, it’s a real picture, and embodied with the cultural cargo that was the foundation of alpine sport and recreation in New Zealand’s North Island. It’s a history that, as Lee Davidson reveals in her feature Publicising Peaks, traces the evolution of our identity as a nation also, and draws us all together, like threads in the same tapestry.

Looking back, one might see coincidences, or simply the pattern made by history as it weaves back on itself. Ultimately, both sides of my family were members of the same ski club as Haensli, though none of them had met, until recently.

New Zealand remains a small country, not unlike Switzerland, as it turns out. My brother’s wife hails from the Swiss Alps also, and is the great-niece of the man flying through the air on an early New Zealand tourism poster. The fibres of history draw us all in, until the degrees of separation between one and all become less obvious than the fabric that binds us together, and no more so than in New Zealand, where we play on the backs of giants.