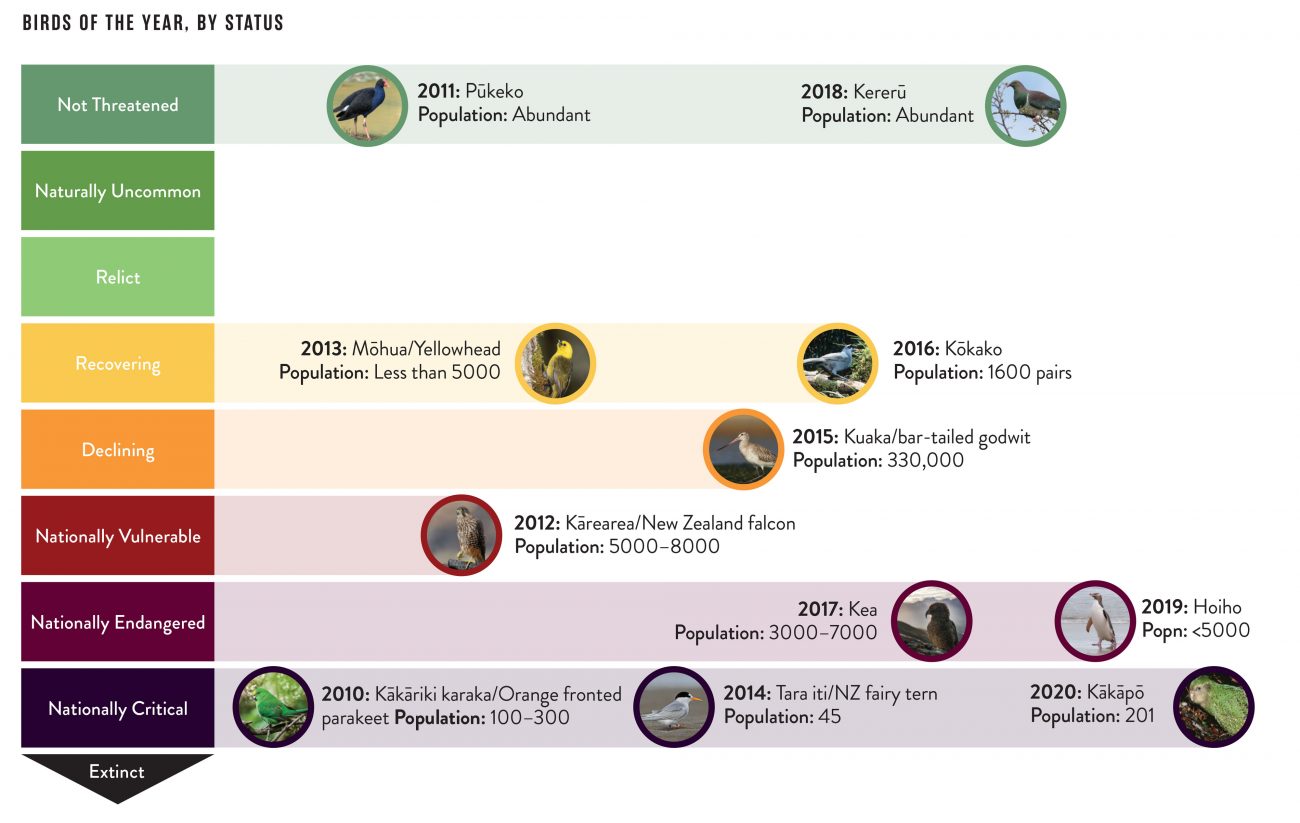 Each year, New Zealanders vote for Forest & Bird’s Te Manu Rongonui o te Tau / Bird of the Year to select a winner. Last year it was our flightless, nocturnal, long-living kākāpō, which clings to existence on just three predator-free islands around New Zealand. They were abundant in New Zealand before humans arrived, but have teetered on the edge of extinction since the early 1900s and reached an all-time low of about 50 in the early ‘90s. Now there are just over 200, but are still listed as Nationally Critical. Rakiura/Stewart Island kākāpō are in good genetic health despite inbreeding, according to a study of 50 kākāpō genomes published in September.

Flocks of kea—the winner in 2017—in tourism hotspots conceal the fact that numbers are falling dramatically across the Southern Alps. Even though they have had full protection since 1986, they are vulnerable to predators such as stoats and cats, and their taste for lead roofing nails has resulted in lead poisoning in some birds (up to 64 per cent of birds in one study). Likewise hoiho (the yellow-eyed penguin) is nationally endangered and one of the rarest species of penguin in the world due to lack of food and predators. A team of international scientists is working on a penguin vaccine to treat a diphtheria-like infection killing hoiho chicks.

But there are also glimmers of hope. The North Island kōkako, a winner in 2016, was considered threatened in the 90s but is now considered ‘At Risk–Recovering’, with around 1600 pairs. In Canterbury, tramping guides out of work due to Covid were redeployed to help out kākāriki karaka with large-scale predator control. And last summer, a tara iti/fairy tern chick was successfully reared by hand for the first time since the 1990s.

Tūī took the inaugural Bird of the Year title in 2005 and, like kererū (2018) and piwakawaka (2006), they have returned to many major urban centres in recent years, due in large part to the creation of bird sanctuaries like Zealandia in Wellington and Tiritiri Matangi in Auckland. Kererū have been slow to repopulate areas because they’re going hungry. According to a study published in June, deer and goats race kererū to the plants they like to eat.

The birds that have evolved in Aotearoa the longest—including kōkako and kiwi—are much more vulnerable to predators and forest loss than more recent arrivals, such as the piwakawaka/fantail.