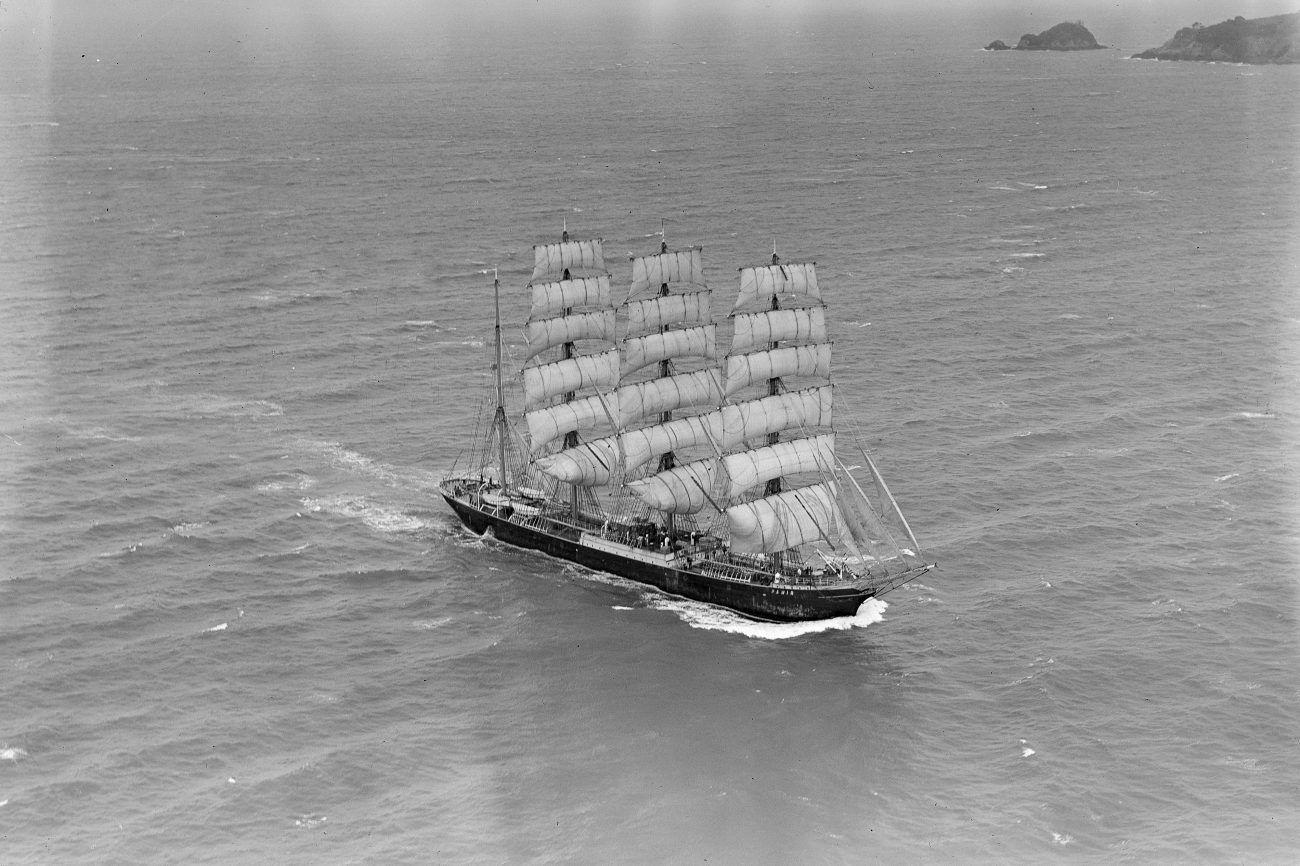 When the four-masted barque Pamir burst into Wellington Harbour out of the rolling vastness of the Southern Ocean on a cold and blustery day in late July, 1941, its captain, Verner Björkfelt, would scarcely have credited that just days later, he would lose his ship.

One of the famous Hamburg-built ‘Flying P-Line’ vessels, Pamir arrived in New Zealand waters from the Seychelles with 4000 tonnes of guano after a fast passage of just 57 days—a reminder of its prowess in the Australian grain races of the 1930s, when on one occasion it made Cobh, Ireland, from Wallaroo, South Australia, in a record 103 days.

Pamir entered Wellington flying the Finnish flag, and with the blue and white symbol of a neutral vessel painted on its steel hull. Unhappily for Björkfelt, by the time he made landfall, that declaration was meaningless. While he was battling southern gales en route to New Zealand, a geopolitical storm in Europe had sealed the fate of his ship. Finland chose that time to renew its fight against the invading forces of the Soviet Union, which had recently become a British ally. Worse, the decision threw the Finns alongside the troops of Nazi Germany.

As a result, shortly after Pamir’s arrival, and with the encouragement of Britain, the ship was seized as a war prize by New Zealand Customs. Björkfelt washed his hands of such politics, declaring that he and his fellow countrymen were from the ­­Åland Islands, home of Pamir’s owner, the Erikson Line. Although nominally Finnish, said Björkfelt, they would all rather be under Swedish rule.

Seven of the ship’s 29 crew were New Zealanders, four of them experienced Union Company sailors and the other three—two farm workers and a dairy factory hand—new to the high seas.

In the words of one reporter: “They had seen some ‘pretty bad’ hail storms, some ordinary storms, and once they had an almost continuous 22-hour battle aloft with the canvas.”

Once ashore, all seven signed off to find more congenial berths in steamers, having had their fill of hard tack, long watches, and hardship in the rigging.

In accordance with international law, the barque and its cargo passed into the custody of the Supreme Court. And here, due process hit a snag. Two years into a global war, New Zealand found itself desperately short of oceangoing vessels, and Pamir was commandeered for service. Legal wrangling over whether Finland was an enemy combatant, concerns about abuse of the prize procedure, and quibbles over the valuation of the vessel and its cargo dragged on for weeks. It was not until October that the ship was handed over to the Crown.

The only vessel ever seized by New Zealand as a prize of war, Pamir was soon put to work. The ship made a total of 10 commercial voyages under the New Zealand flag, and with a largely New Zealand crew—eight to San Francisco and Vancouver, one to Sydney, and the last to London and Antwerp.

In 1945, Captain Roy Champion, who had just stepped down as Pamir’s master, argued that the barque should become a training ship for the country’s mercantile marine cadets and detailed how such a “maritime university” might work.

The idea was not taken up. In November 1948, Pamir was handed back to the Erikson Line. The following year, it became the last windjammer to carry a commercial cargo round Cape Horn.