The sound of  the wind tearing buildings apart woke the inhabitants of Inglewood at 3.30am on Sunday August 12 as a tornado swept through the town.

Forty-three buildings were damaged, people were thrown across rooms, hundreds of windows blown in and slivers of glass embedded in a cot, yet, miraculously, no one was killed.

The luckiest survivor may have been Paul Dodds. A 400kg steel beam was carried 100 metres and lifted over a two-storey building by the wind before it crashed into the room where he was sleeping, bringing down the roof on top of him. Fortunately, several cars in the garage attached to the room held the debris up and pre­vented Mr Dodds from being crushed.

Many trees were up­rooted or snapped off, some sheep were killed by flying roofing iron, and three goats were carried high up into the trees of a shelter belt.

Although the drama in Inglewood was over in minutes, on Mount Ruapehu it lasted six days. The summit of Ruapehu is almost 3000 metres above sea level. At this altitude the winds were gale force or stronger for days, and the temperatures well below zero. Heavy snow and strong winds on the Saturday forced climbers to take shelter, either in huts or in caves dug into the snow.

Even when the snowfall eased, the visibility re­mained poor due to blow­ing snow and cloud. But most dangerous of all was the effect of the cold. With sub-zero temperatures and gale force winds, death from exposure can come in a matter of minutes.

These conditions caused the tragic death of six young servicemen who were on a training exercise. Their party of 13 success­fully dug a snow cave on Saturday, but left it during a lull in the weather on Sunday. They had only travelled 150 metres when conditions forced them to halt. They were unable to dig another cave and only managed a long trench.

Two of the party left on Sunday evening in a desperate attempt to get off the mountain and get help. After an eleven-hour walk they raised the alarm. Rescuers who reached the party on Monday found only five of the 11 still alive. These survivors were successfully brought off the mountain, but the bodies had to be left for three more days.

Nearby, a Japanese climber, Jo Ji Iwama, had also left his snow cave on Sunday. However, after walking some distance, he was successful in his attempt to build a second snow cave, where he stayed until the fine weather on Thursday morning enabled him to walk down the mountain to an emotional reunion with friends.

In Motueka, rain on the Saturday and Sunday caused flooding that took one life and caused mil­lions of dollars of damage.

A skier was killed in an avalanche on Mount Olympus in Canterbury on the Saturday, and the weather played a part in some of the fatal road accidents around the country during the week­end.

The depression that caused all this weather had developed over the North Tasman Sea on Friday, then deepened rapidly as it moved southeast to cross the South Island on Sunday evening. The cold front ahead of the low brought the heavy snow to Ruapehu on the Saturday. Thunder­storms developed in the cold air behind the front, and one of these brought the tornado to Inglewood. It was the gap between the front and these thunder­storms that lured the climbers out of their first snow caves.

As the thunderstorms went past the mountain, the wind direction shifted from north-north-west to west-north-west, and this may have contributed to the deterioration that forced the climbers to attempt to dig their second snow caves.

The heavy rain in Motueka and Nelson was mostly caused by the front, but the thunderstorms also contributed. The northerly winds blowing from the sea to the land were forced to rise when they met the mountains around Nelson, and this enhanced the rainfall considerably. By Sunday afternoon these winds turned westerly as the low moved over Westland, and the rain had all but ceased.

The conditions experi­enced on Ruapehu as this depression crossed New Zealand were a grim reminder of how much more severe the weather can be at 3000 metres than at sea level. Winds are frequently twice as strong as at low levels, and often last longer, and tempera­tures in winter are almost always below freezing.

Nor is weather like this particularly rare in winter. In fact, the following weekend saw a depression of even greater intensity cross the centre of the country. There were no reports of climbers in trouble on Ruapehu, but southerly gales brought miserable weather to Wellington for the rugby and rugby-league tests against Australia. 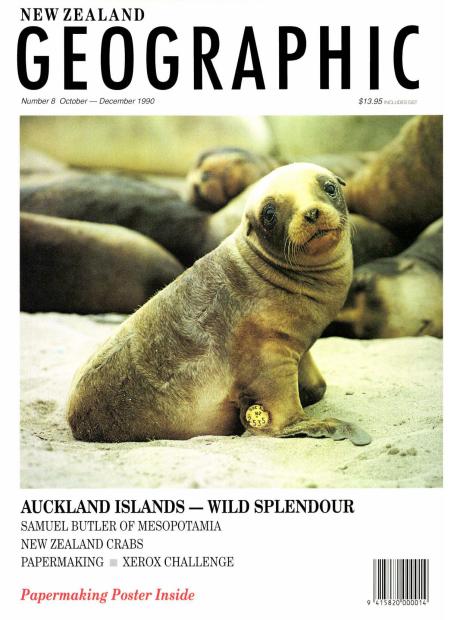