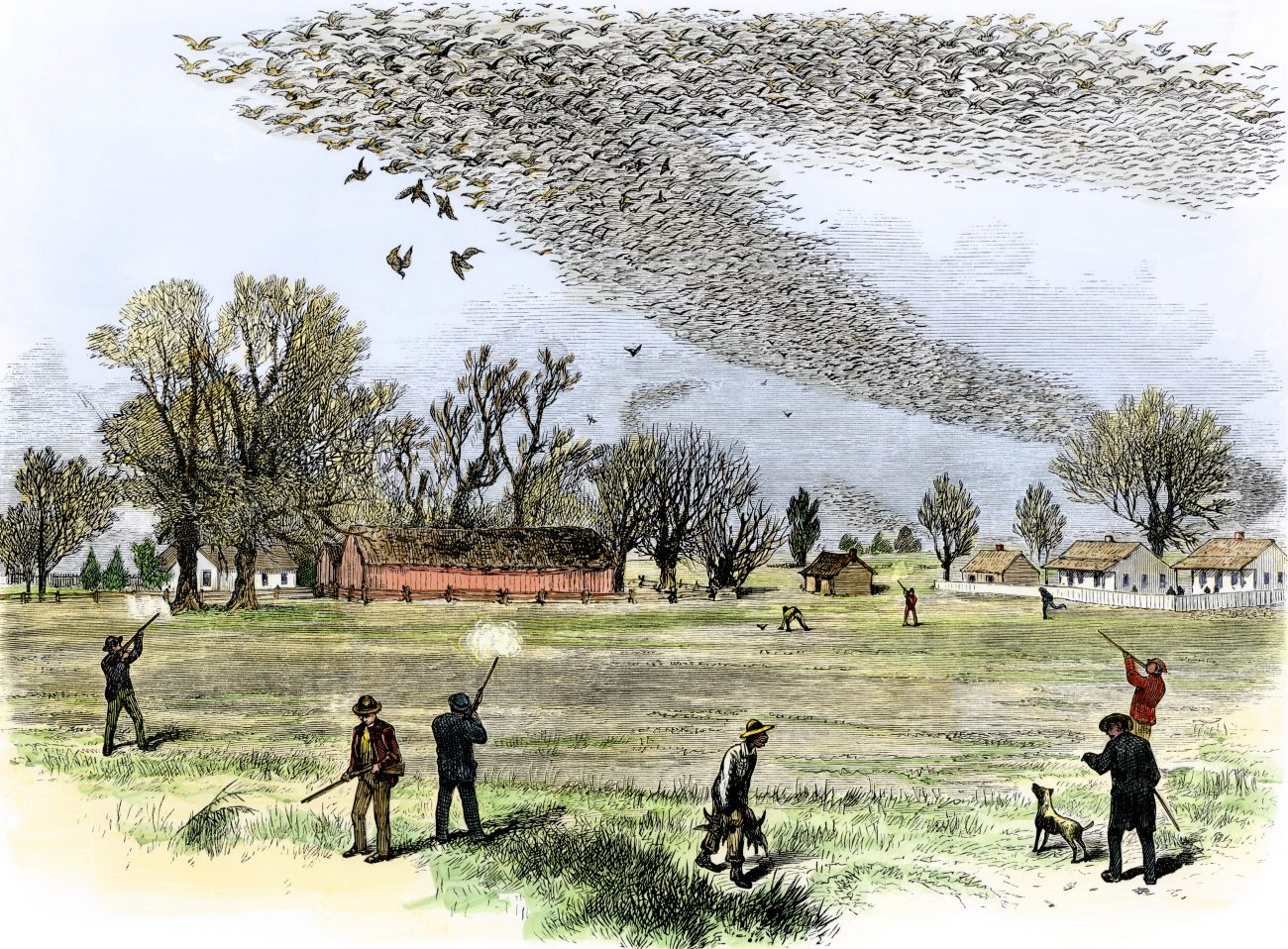 New Zealand is no stranger to extinctions. The list of New Zealand species known to have become extinct since human settlement includes one bat, at least 51 birds, three frogs, three lizards, one freshwater fish, four plant species, and a number of invertebrates.

What is interesting and sobering about the passenger pigeon, a North American species, is that it was possibly the most numerous bird on earth. Passenger pigeons flocked in their billions. Yet they went from being ubiquitous to nonexistent in the space of half a century. Their populations may have seemed “too big to fail,” but they weren’t.

The name “passenger” comes from the French passager—passing by—and did they pass by. One flock in 1866 in southern Ontario was described as being 1.5 km wide and 500 km long, took 14 hours to pass, and held in excess of 3.5 billion birds. (The birds would have been flying at up to 100 km per hour, their top speed when travelling.)

An eye-witness account from 1855 in Columbus, Ohio, described the experience of watching such a flock: “As the watchers stared, the hum increased to a mighty throbbing. Now everyone was out of the houses and stores, looking apprehensively at the growing cloud, which was blotting out the rays of the sun. Children screamed and ran for home. Women gathered their long skirts and hurried for the shelter of stores. Horses bolted. A few people mumbled frightened words about the approach of the millennium, and several dropped on their knees and prayed.”

Passenger pigeons were incredibly social birds, especially when nesting. In 1871, a colony in central Wisconsin was recorded to have occupied more than 2000 sq km—that’s bigger than Stewart Island.

What caused the birds’ sudden and catastrophic disappearance?

Habitat loss from European deforestation was a significant factor, but hunting—on a massive scale—finished them off. They were shot, netted and simply knocked out of the sky with sticks. As railway transportation advanced, boxcars were filled with pigeon corpses to feed city appetites for pigeon pie.

Suddenly, it became apparent that the Cincinnati Zoo’s sole passenger pigeon, known as Martha, was the last of her species. Officials offered a reward equivalent to $25,000 in today’s currency for a mate, but no mate was found. When Martha died on 1 September 1914 she was frozen in a 150 kg block of ice and sent by train to Washington DC where she was taxidermied and put on display in the Smithsonian Institution.

Martha’s demise has strong resonance for a country that has lost so many birds, including the legendary moa. And still our native birds teeter on the brink—or fall in to the abyss of loss. The laughing owl was declared extinct in the same year that Martha died. New Zealand’s two species of piopio—described as “unquestionably New Zealand’s best songbird”—went extinct in the 1940s.

In my lifetime, three more have past into memory: two bush wrens and a snipe. Curiously, 1 September was the date the last two South Island snipes died in captivity, in a desperate attempt to save the species after rats invaded their last refuge, Big South Cape Island, off Stewart Island.

As the Department of Conservation commences its “Battle for the Birds”—a massive pest control operation to try to get native bird populations safely through this summer’s expected rat and stoat boom—it’s worth considering just how high the stakes are for our birds, and just how easily a species can become missing in action.

To hear my discussion with Kathryn Ryan about passenger pigeons on ‘Off the Beaten Track’, click here.