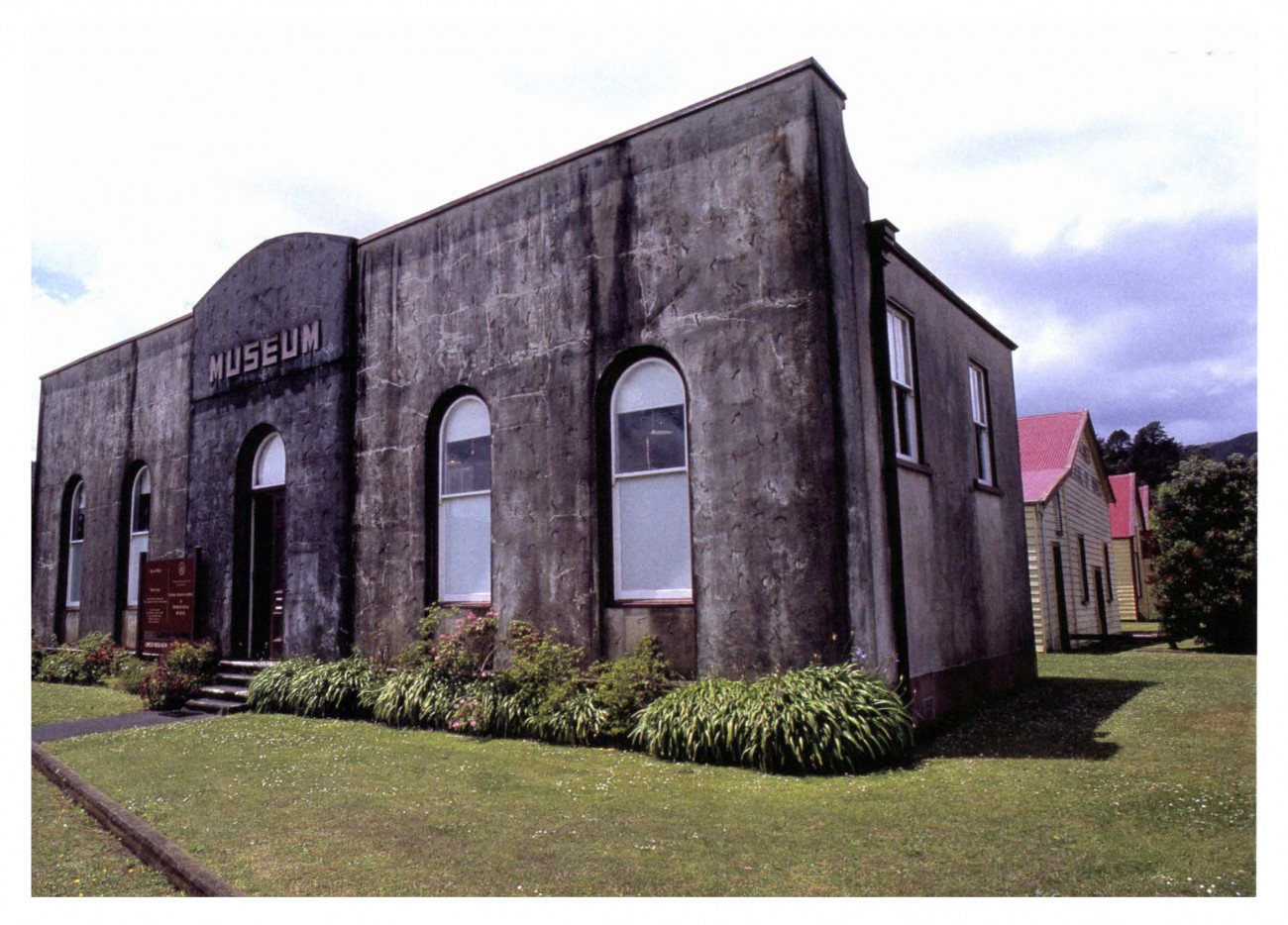 In the summer of 1885 William Lar­nach, the newly appointed minister of mines, boarded a steamer in Dunedin and set out for Hokitika on the first stage of a gruelling inspec­tion tour that would take in much of the South Island. By horse, by rail, on land and sea, Larnach and his party doggedly pressed forward, over mountain passes and across the boulder-strewn rivers of Westland; to Kumara, Nelson and isolated, roadless Collingwood, then on to Christchurch and the Wilberforce River, and finally to the goldfields of Otago.

Accompanying Larnach in the ministerial party was a world author­ity on mining, Professor James Black of the University of Otago’s School of Mines, whose manual Chemistry for the Goldfields (1885) was to become a bible for “the diggers and miners of New Zealand” to whom it was dedicated.

The School of Mines had been set up six years earlier at the urging of the provincial superintendent, with the aim of instructing miners in the fundamentals of chemistry and mineralogy. By then the easily won alluvial gold that had fuelled the gold rushes of the 1860s had long gone, and a new era of intensive recovery involving quartz mining, sluicing and dredging had begun.

It was time for miners to get technical.

The Otago School of Mines was a long way from the action, though, and despite the presence of its direc­tor, George Ulrich—the “best mining expert south of the equator” in the opinion of the Lyttelton Times—and Black’s enthusiastic, showman-like lectures, student numbers were low.

Larnach’s solution was to have lecturers take their knowledge out to the mining districts. On the 1885 tour, Black was surprised to find more than 1600 men ready and willing to meld theory with prac­tice. In the course of eight weeks he delivered more than 40 lectures on geology, chemistry and scientific methods of ore extraction.

In the long vacations over the next two years he repeated the exercise, discovering such a demand for this form of technical educa­tion that it was decided to establish local schools of mines the length and breadth of the country to offer elementary courses for mine manag­ers, battery superintendents, essay­ists and engine drivers.

Larnach returned from his first tour with a good knowledge of gold mining, which, though it had declined from the record 16,100 kg of gold recovered in 1865, still man­aged to recover a more difficult 6200 kg in 1885. He also came back with a high opinion of West Coast coal, which was used in vast quantities for steamships and trains. Larnach considered it superior to coal from Newcastle.

“There can be no doubt that there is an enormous store of wealth in the minerals of New Zealand,” he reported in his overview of mining in the colony. “The agricultural and pastoral interests I do not wish to detract from…but it is the mineral product, the development of which will cause this country to stand in a foremost position in this respect in Australasia.”

With coal production set to rise dramatically, and with new gold-ex­traction techniques being pioneered out in the field, the local schools were to have a full workload.

The largest and most prestigious of these schools is still with us, its cluster of buildings meticulously restored by new owner the Historic Places Trust and open for inspec­tion. To step through the door of the Thames School of Mines Mineralogi­cal Museum, sandwiched between the town and the Firth of Thames, in the shadow of the gold-rich Coromandel Range, is to enter another world.

Inside the concrete building, with its 1950s stucco dressing, are pa­raded the obsessions of another age. Though no students have crossed its threshold for 50 years, the lofty 20­metre-long museum still exudes the late-Victorian enthusiasm for order and display.

Encased in long glass cabinets are serried ranks of neatly labelled rock samples, testifying that this is one of Australasia’s most important minera­logical museums.

The tag for one nondescript bar of dull metal reads, “Bullion from Sb softener before running to Zinc pan”; another, “Slag from Antimony-Lead blast furnace”—the liberal capitals betraying a reverence for the very stuff of the earth. And very use­ful some of that stuff is. Antimony sulphide, for example—which the museum has in a rare fan formation —expands when cool, so was used in the print industry to lock move­able type in place.

At every turn are minerals un­known to any but the most devout rock hound. Who could guess at “Goodletite”, for instance, a rock studded with delicate rubies that is named after Black’s assistant, Wallie Goodlet, and found only in West­land? Then there is a sample of gold deposited on galena, a lead ore, which reflects light at a wavelength that makes the gold appear white.

In charge is the genial John Isdale, who has been poking about the place since he was seven years old. Many inappropriate items have been removed from the collection. “Fijian war clubs aren’t really what you want in a mineralogical museum,” he says.

Much remains, including small scales for weighing gold and intricate teaching models of stamper batter­ies, built at a model-making factory in Freiberg, Germany, and a patent safety cage.

Isdale’s father, Alistair, became curator in 1956, two years after the School of Mines closed, running it as a concession for the local council. At the age of 89 he was still to be seen riding to the museum, sporting a distinctive pink fluorescent helmet. His 10,000 pages of research on local mining history are now held at the Turnbull Library.

By wandering about the mu­seum’s reference collection it is possible to gain an insight into the geology of the Coromandel. Most of the gold lies in rich “bonanza” veins separated by quartz. Often keeping the gold company are pyrite (fool’s gold), calcite (sometimes tinged pink by manganese), rhodonite, rho­docrosite and a scattering of other minerals.

Some gold is associated with sulphides of iron, lead, copper and zinc. There are also a host of exoti­cally named minerals lying about with the sulphides, including azurite, cuprite, malachite, anglesite, realgar and limonite. The ores from some lodes couldn’t be extracted by the simple expedient of brutal crushing followed by amalgamation with mer­cury, as could the bonanza veins, so in the early years more than half of the gold mined was lost.

It was only with the introduction of the cyanide extraction process in 1892 that the ores could be made to yield up most of their gold. James Park, who became director of the Thames School of Mines in 1890, had a bit to do with reviving the by then languishing gold industry by spreading the word about the new process, his The Cyanide Process of Gold Extraction (1894) running to 10 editions.

The printed syllabus for 1901—the year Park quit the school to become professor of mining at Otago—suggests an ambitious programme of instruction, ranging from pump and pit work, theoretical chemistry and practical astronomy to metallurgy, mineralogy, blowpipe determination (whatever that might be), ventilation and explosives.

The introduction to the syllabus records the evolution of the school: an experimental battery test room added in 1888, a library and lecture room in 1895, three years later a separate assay room (the school made a little on the side by analys­ing the commercial value of ore or samples brought in by miners), and in 1899, the museum itself.

The booklet has a photograph of the school’s laboratory, which, when Isdale leads me to it from the muse­um, stands before me as if conjured directly from the page: the broad-planked kauri floor, the long bench laden with beakers of coloured liquid, the jars lining one corner, the blackboard which bears a bewilder­ing chemical equation that could have been set down mere minutes ago by the chalk-dusted hand of the assistant lecturer, Mr Barrance.

Isdale excuses himself to induct a gaggle of visitors into the art of fire assaying, which, as far as I can make out, consists of mixing pulverised rock with soda ash, borax, lead oxide and a dash of flour, then heat­ing it to 1000° C. If all goes well the soda ash dissolves the quartz and any gold or silver is collected by the lead. The lead is cooled and ham­mered into a cube, then heated once more to astronomical temperatures in dishes made from bone ash that absorb any base metals, leaving just gold and silver. The silver is then dissolved using nitric acid, leaving pure gold.

Emerging into the open air, I understand the Thames school’s attraction to miners. It was on the doorstep of a vast array of minerals and close to any number of commer­cial mines—so close that a school playground once collapsed into an old shaft. Drive down Main Street to­day and you will pass over old mine workings.

Anyone wanting to get beneath the surface of things should turn left at Cochrane Street and pull up outside the museum. It is a short journey to the centre of the earth.