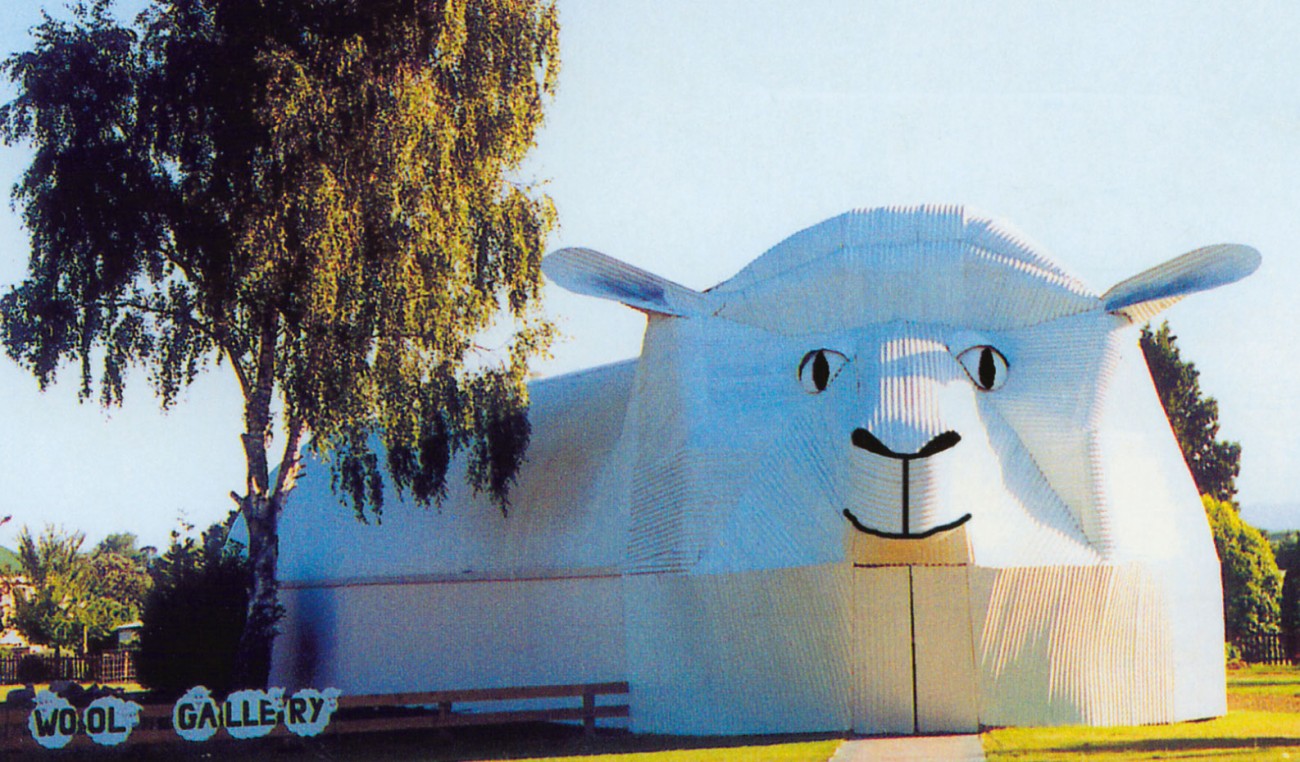 Travel down State Highway 5 and it’s hard to miss Tirau. The township’s big sheep and matching dog cause many a visitor to do a double take. Those tourists alighting for photo opportunities find a town bedecked with corrugated critters. For this Tirau cheerfully blames Nancy and John Drake. They started it all a decade ago.

The Drakes were school teach­ers. During a spell in the Wairarapa, Nancy learned the art of spinning and became passionate about wool. Her knitwear clothed her family and she hankered after a shop in which to sell her excess product.

When John abandoned teach­ing some years later, they packed a campervan and went in search of a shop site on the main North Island tourist routes. Towards the end of their protracted and somewhat frustrating quest they purchased an empty section in the middle of Tirau.

Nancy was prepared to bring on a Skyline garage and start selling immediately. John, however, comes from the slow-but-steady school. He counselled building a full-sized shop in which she might sell a range of woollies and sallied forth to find the cheapest building they could afford that would be big enough. A barn was the answer. For the price of an ordinary house, they could get a kit-set barn complete with its own flat.

However, they realised that few travellers would stop for a barn alone. They needed something that would cause potential customers to back up. Much brainstorming led to the idea of “a very big, eye-catching sheep—in white”.

But how to make a barn look sheepish? John tried and rejected both sprayed concrete and poly­styrene. Both produced results that more closely resembled a corrugated caterpillar than a sheep. Then one serendipitous day, a young architect suggested trying corrugated iron. He even steered John in the direction of a redundant manual iron roller.

John was now set on a whole new tack. He built models from balsa and paper and finally figured how it might be done. However, when he sought council approval he found himself hamstrung by the lack of plans and specs.

Fortunately the South Waikato District Council was keen to capture new businesses and their building in­spector went out of his way to help. Among other things, he ruled that the head was merely a façade and there were no regulations covering façades—just so long as they didn’t fall down.

And so in January 1994 the Drakes began construction, their trusty campervan doubling as build­er’s wagon and sleeping quarters.

The Big Sheep is essentially a kitset barn with a head grafted on to the front. No local builder would touch the project. Builders in Tirau are a prudent bunch, allergic to projects that lack plans or specs. For­tunately, local chippy Keith Carver was between jobs. Despite reserva­tions, he offered to help out. And so it came to pass that Keith climbed ladders and hammered while John sawed and schemed.

Building the head was somewhat hit-and-miss. Seven prefabricated barn quarter-arcs, arranged in a semicircle, provided the basic structure of the head. On them a 100 x 50 mm wooden framework was hung.

John worried that the nails needed to restrain the sections of iron needed for the head could result in unsightly streaks of rust. Serendip­ity again kicked in. He discovered that roofs in Rotorua use corrugated aluminium and was able to scavenge what he needed from a local scrap merchant.

Suddenly John’s dream was a reality, although for a short time Keith argued that the structure more closely resembled a baboon than a sheep. However, the day the nose was clipped in place Tirau suddenly took on a decidedly sheepish look. The total cost had been a little over $100,000.

The sheep proved an instant attraction. People stopped. They looked. They came. They spent money. Nancy had insisted on open­ing her shop before the head was added. For a while she seldom made $300 a month. On one occasion she sold nothing for five days in succes­sion. But the day the head was fin­ished it all turned around. She found herself with a $1000-a-day business on her hands.

The Drakes never looked back and nor has Tirau. With the sheep finished and a proven success, John advocated building more corrugated iron structures about town. The city fathers—and a few mothers—were reluctant. They had hoped to revi­talise their township with gentile, olde-worlde antique shoppes.

But one day Tirau needed new public toilets. The township asked to use a piece of John and Nancy’s property. The Drakes agreed and offered a peppercorn lease, provided the toilets were built in a style that would complement the sheep and incorporated an information centre. The upshot was Tirau’s dog, the construction of which became a voluntary community project.

The dog was driven by Henry Clothier, one of the olde-worlde  antique shop owners. He twisted the arm of his son, engineer Stephen, to co-ordinate the building.

John produced plans for a dog of similar parentage to the sheep but engineer Stephen wanted something more refined. He enlisted his bull terrier as a model but regrettably this failed to provide the required sheep-doggy appearance. Modifications were called for, such as the droopy ear tips. It was duly completed in July 1998.

The dog led to Stephen being asked to undertake other corrugated commissions. Gradually Tirau has been transformed to Corrugated City. Even the street lamps now bear the town’s logo of a cabbage tree, the ti, punched in corrugated metal.

The effectiveness of John’s design is shown by Nancy’s wool shop never having to advertise. From day one journalists flocked to Tirau. The sheep and the dog, and now the mantis, moo-loo mouse and a bevy of other corrugated critters have be­come regular features of travel mags and TV programmes.

Today the Drakes have retired to Milford, leaving the shop in the ca­pable hands of daughter Sally. John retains one not-so-secret ambition. He would like to build a giant cor­rugated pink pig. He is looking for a sponsor and a community wanting a sure-fire tourist attraction.