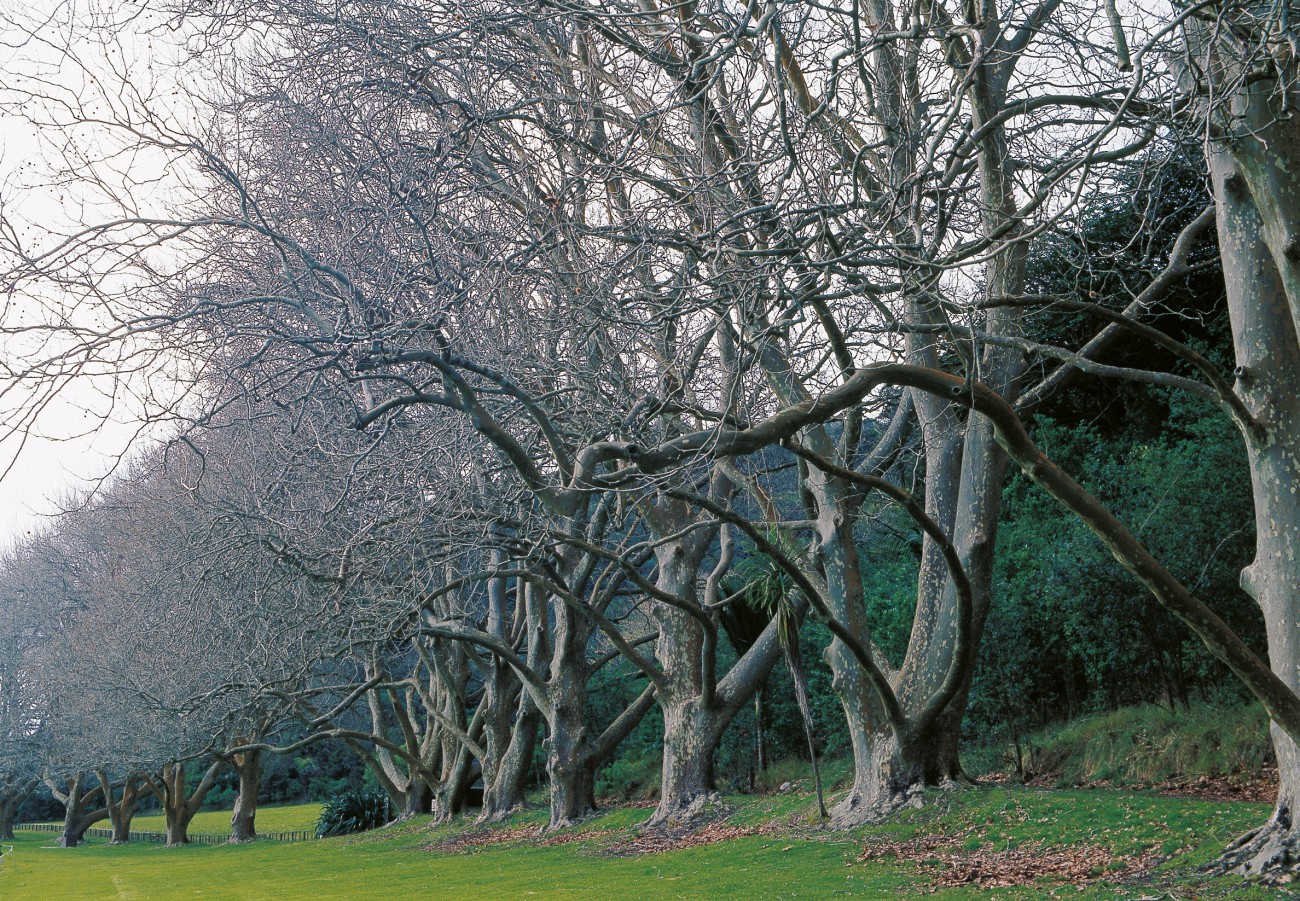 Like a lot of early settlers, Gra­ham saw New Zealand as a land of opportunity. Successful in business and politics, he bought property in many parts of Auckland—and even islands in the Hauraki Gulf, such as Motutapu and Motuihe. Most purchases—like that at Waiwera, where he developed the thermal re­sort—were commercial propositions, but Wenderholm remained apart.Graham built a house under the southern cliffs of the beach. It was, in a way, a Kiwi holiday house­ somewhat grander perhaps than a bach, but a place far removed from the hustle and bustle of city life.

It was probably in the 1860s that Graham began to plant trees at Wenderholm, not long after the house had been built. Perhaps it was a sense of belonging, of com­mitment to the land, that got him started—who knows? Trees were fashionable then, especially exotic ones. Many newly acquired estates were planted in a manner befitting an English gentleman. But Graham’s interest in trees went beyond just trying to impress the neighbours. From the time he started until 1885, when he sold the land, Graham planted a lot of trees, and many of them can still be seen today.

Its isolation ended in 1964. In that year Wenderholm changed forever. It was purchased by the then Auck­land Regional Authority and became Auckland’s first regional park.

For tree-lovers like myself this was undoubtedly a good thing. Not only were the trees protected from po­tential sub-division, they were also made accessible to the public—ex­cept, that is, for the trees in the garden around the old homestead, which remained in private ownership until 1973, when they also became part of the park.

I had trees on my mind that morn­ing, and I knew there were rich pick­ings around the homestead. I’d never spent much time there, but the gate, and a shell pathway that wound its way alluringly among old trees, looked promising—so I went in.

It was the tui feeding on the flow­ers of coral trees (Erythrina sykesii) that caught my attention first. The winter-flowering coral tree is always a pleasant surprise in New Zea­land. It’s one of the many botanical wonders to have come out of South Africa—and it was good to see a local making use of it. I wondered what I would see next. A kookaburra nesting in a pohutukawa, perhaps? It wasn’t out of the question. There is a small population of kookaburras at Wenderholm, courtesy of Robert Graham’s close friend, Sir George Grey. Grey, based on nearby Kawau Island, was besotted with exotica: he imported monkeys, zebras, cas­sowaries and ravens, to name but a few. The kookaburras survived—and so, unfortunately, did the possums and wallabies.

Trees, too, came via the Gover­nor. I saw them immediately. They had an international look: a couple of sturdy Chusan, or Chinese wind­mill, palms (Trachycarpus fortunei), growing on a well-tended piece of lawn; an elderly Caucasian fir (Abies nordmanniana); an Italian cypress (Cupressus sempervirens).

And then there was the big Aus­tralian, a Moreton Bay fig (Ficus macrophylla). This was truly a mon­ster—big enough to park a bus in, by my reckoning. The powerful branch­es were scarcely believable: I hoist­ed myself into them, reliving the Tar­zan fantasies of my boyhood. If there weren’t monkeys in the branches above me, maybe at least there were some kereru. Unfortunately, the tiny wasp (Pleistodontes froggatti) arrived in New Zealand in the 1990s. This is the chief pollinator of the fig, and birds, including kereru, which feed on the fruit are dispersing the seeds everywhere.

All the same, I couldn’t bring myself to hate the tree. Nature, like human history, is complicated, and our perception of events changes through the lens of time. Besides, the tree had put its roots into the coun­try 150 years ago—about the time my ancestors had arrived.

I ambled past a Holm oak (Quer­cus ilex) and a Bunya Bunya pine (Araucaria bidwillii) on the way out to the car park. Both were impres­sive specimens, dating from Gra­ham’s time, but another had caught my eye—a cork oak (Quercus suber).

Of all the gifts from Sir George Grey, this is possibly the most im­pressive. Like the Holm oak, it’s an evergreen with Mediterranean and North African origins. But unlike most other oaks, famed for their timber, the cork oak is noted for its bark. It takes about 25 years for a cork oak to become harvestable.

Then the outer bark is stripped from the base and proc­essed to make anything from bottle stoppers and floor tiles to high-fashion clothing. A cork oak can be har­vested many times during its life, but the oaks at Wender-holm look as if they missed out on their first harvest by a century or so and are purely ornamental.

Interestingly, New Zealand has its own “cork tree”— and there are some plantings at Wenderholm. Whau (Entelea aborescens) is a small coastal tree, with large heart-shaped leaves and a fast-growing reputation as a landscaping plant. Its wood, even lighter than cork, was used by Maori for fishing-net floats and rafts.

I was tempted to cast a line myself. Catching fish at Wenderholm was something I’d done before. The first time I had been six. Such had been my excitement at landing a fish that day I had fallen off the jetty, and my grandmother had had to jump in—fully clothed—to save me. I’m pleased to say that the spotty (all 8 cm of it) tasted delicious when I ate it the next morning.

From the car park I could see more trees, their trunks twisted upwards like the coils of mythical serpents. Like fishing on the jetty, they formed some of my earliest memories of Wenderholm. These were the trees I’d come for—the pohutukawa (Metrosideros excelsa).

In some ways there is nothing remarkable about them: as individuals they are smaller than the London plane trees, less muscular than the Moreton Bay fig, less col­ourful than the coral trees (at least in winter) and not as exotic as the cork oaks. But collectively they are very impressive, because they form a giant grove that stretches almost from one end of the sand spit to the other.

I wandered slowly through the grove. There was a fairy-tale element to the trees. The story goes that Rob­ert Graham planted most of them. When he bought the land, there were apparently just a few pohutukawa on the spit. He stopped the local ship-builders, who were plundering the trees, from felling them and began to re­plant the area. That was well over a hundred years ago, and the trees he planted have grown to form a magnifi­cent grove—the largest planted grove of pohutukawa in the world.

I stopped near the beach. Through the gaps in the canopy I glimpsed the impressive headland Maunga­tauhoro. It was easy to picture the kereru and tui up there feeding on taraire (Beilschmiedia tarairi) and puriri (Vitex lucens), heavy with fruit. The new owners of Wender-holm were doing good work. An intensive pest-eradica­tion programme, run by the Auckland Regional Council, had brought new life to the possum-ravaged trees and sent the rats and mustelids packing. Wenderholm, it seems, is proving a winter home for wildlife and people.

There was only one thing left to do: I walked back into the depths of the grove, found the biggest pohutukawa I could… and climbed it.