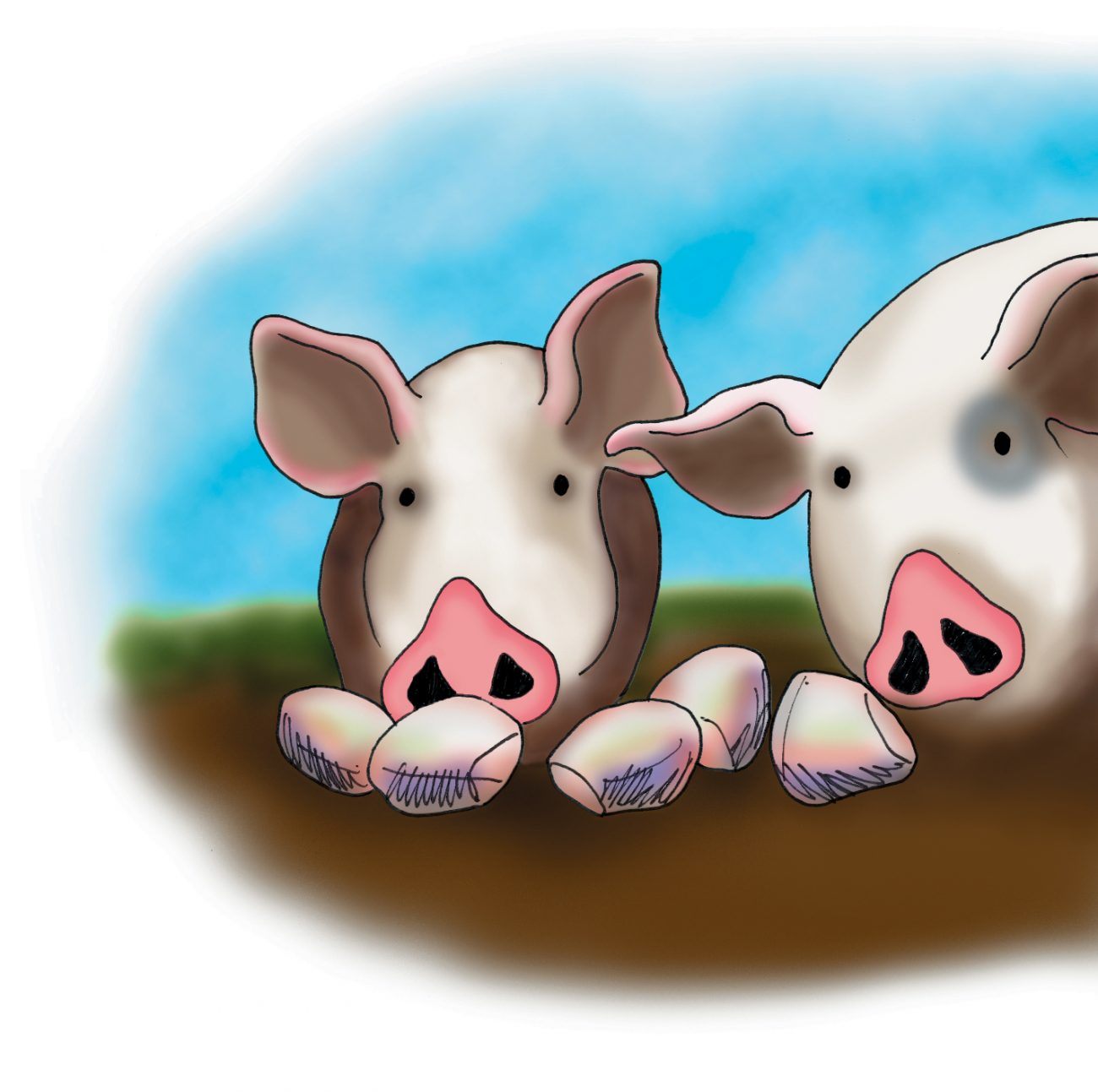 My friend and neigh­bour Jack Fynn always said, “There’s money in pigs, but it’s a long way in.”

This is true, of course, but even though it is a long way in there are many other qualities which alternately fascinate and exasperate you about our friends the pigs.

In our sitting room when we were children there was a collection of boars’ tusks—relics of various animals which had passed away over the years.

The largest of these trophies had belonged to a neighbour’s boar, which had got into the habit of stealing the milk we put out for my father’s pigs. This was in the very early days when times were really hard and a little milk for the sows and litters in the early spring was a very precious thing.

My father heard the robber, slipped out of bed at about 2 A.M., sprinted across the paddock in his singlet and battered the boar to death with a fence post. Even 20 years later he couldn’t keep the satisfaction out of his voice.

In a similar incident with some neighbours, the injured party, Alf Redfen, buried the guilty pig with his head out of the ground in a prominent position by the road.

It wasn’t all like that, of course, but these boars were fierce and terrifying in the eyes of young children.

In the early days, pigs were taken in wagons out to central weighing points where buyers paid on a poundage basis.

One of these points was on the corner of Waimanu Road, where old Alec Ferguson used to wait with his horses harnessed to the wagon, and any line of pigs slightly under weight were bought, galloped home, filled with skim milk and galloped back to be sold at a quick profit.

One of the never-ending problems associated with pigs was carrying out the necessary surgery on the gilts and young boars. When they had become so large that they could not be held, it was the custom to use chloroform. This was poured onto a pad in the bottom of a gumboot, which was then jammed over the pig’s snout. Speed was the essence of the operation. Too long an exposure and the pig died, too short and he recovered his senses. Even today, when I watch the hospital dramas on TV, the urgency of those days returns. Any old-time pig man would share the desperation of today’s heroes.

It was custom­ary in those days to feed meal as a supple­ment to the basic rations of swine milk (which was available in the days of home separators). One of my most lasting memories is of a relationship which grew up between me and a little mouse. He used to steal the meal stored in a 44-gallon drum. As the meal went down in the drum he couldn’t jump out. He would look up and wait till I held a stick down to him. He would run up it, leap out and swim away through the inevitable lake of water. I’ve never since encountered such complete trust in man or beast . . . or woman.

Some pigs, particularly old sows, had characters all of their own. Ella was one. We bought her from Bill and Ella Reynolds. She was cunning and simple at the same time; a big lop-eared, black Devon, was Ella.

We fed swedes to the sows in the winter, throwing them over the fence to be shared among a group. Ella would grab a swede and run. Another sow, Tammy, would chase her. Ella would pause to get a bite and the others would be in on her. Ella would seize the swede and dash off again, then Tammy would eat up the scraps and take up the chase again.

And so it went on, neither sow ever getting a proper feed, while the others cleaned them all up.

Sometimes, in rough weather, litters would arrive in a storm and would be brought in to the kitchen to be revived from the cold in front of the coal range. In no time at all they would be fighting just like children, and would drink out of a saucer as though they had been born to it. They really are the most fascinating of young animals, and incredibly intelligent.

Another memory, which today’s circumstances revive, was the custom of growing your own potatoes. Most farmers tried this for a while, but no matter how far away the pigs were kept from the spuds, or what precautions were taken, the old pigs seemed to know just when it was time to harvest the crop.

They would break out or break in and that was the end of the potatoes. The pigs enjoyed them, of course, and probably felt they were provided especially for them.

Those days are long gone, but you still hear dairy farmers with a nostalgic look in their eyes assuring people, “Yes, there’s money in pigs,” but none of them ever seems to go back to get it.