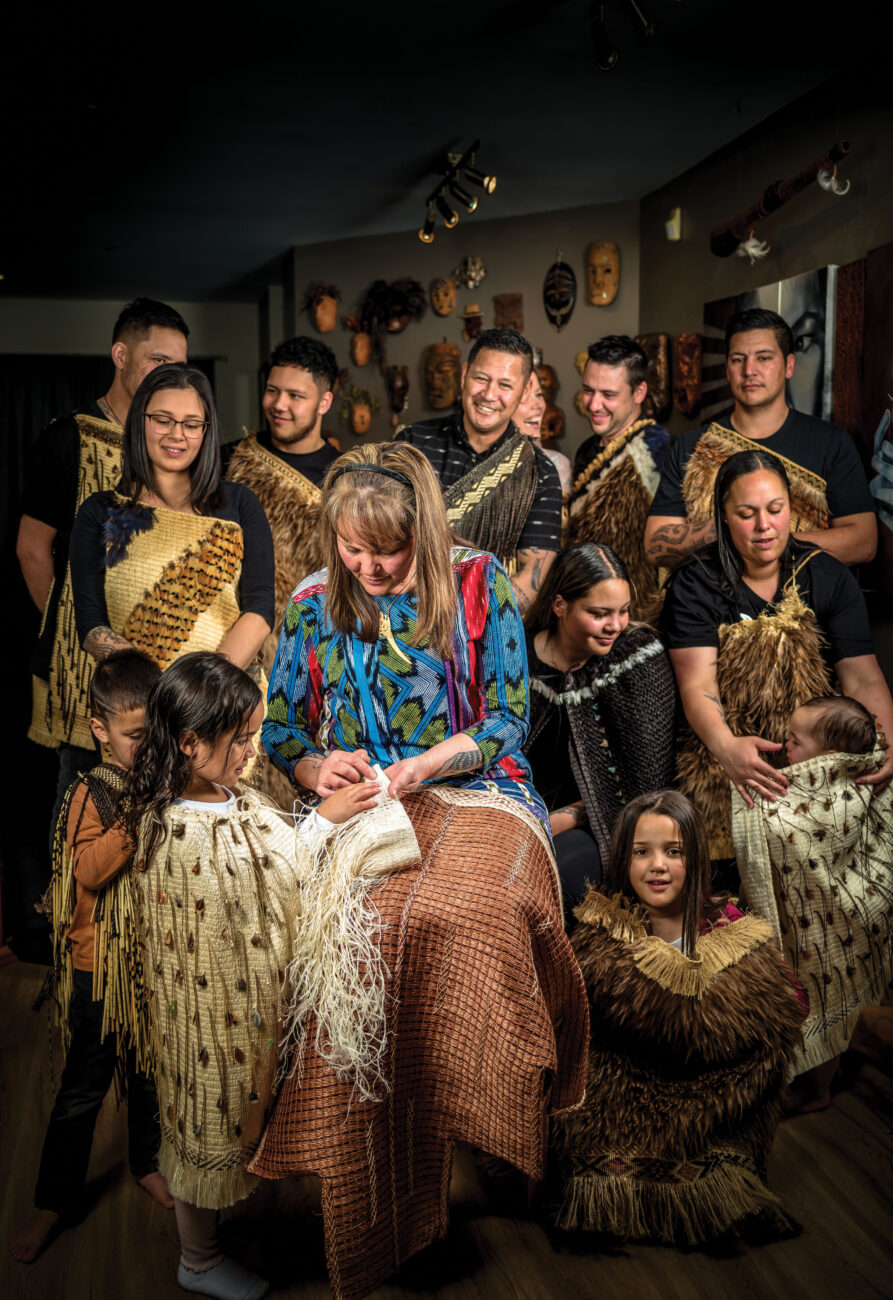 Veranoa Hetet’s hands are rarely still. Her weaving stand hasn’t left her living room in years, and on a Saturday morning, after a frantic week weaving to meet a deadline for an exhibition of her work, she’s back preparing strips of harakeke (flax). It’s a repetitive task, running her fingernails along the length of the leaf to remove the midrib, making strips of the same size.

When she talks about weaving, or about scraping muka (fibre) from the plant, her hands go through the motions. “I just have to do it,” she says. “If I don’t weave or do one creative thing during the day, I feel that my day has been lost.”

It started with Veranoa’s great-grandmother Dame Rangimārie Hetet, who led the revitalisation of traditional weaving, and composed a waiata that called on all her descendants to uphold the arts. Generations of the Hetet whānau have taken up the mantle of teaching others to weave using traditional materials and techniques.

“Weaving and carving were very much like the language [te reo] in that they were in danger of dying out,” says Veranoa, unwrapping a korowai that Rangimārie wove some 80 years ago. “My great-grandmother could see that and, having come from a family of weavers, she was determined to not let that happen.”

The tikanga at the time was that weavers should not teach anyone outside their hapū (sub-tribe), and patterns were held close, much like Scottish tartans. Rangimārie broke with tradition and offered to teach anyone who was willing to learn—regardless of their tribal affiliations. “And that’s become a family tradition that we hold on to,” says Veranoa. “I think it is quite wonderful to have all these descendants who are still listening to her.”

With iwi affiliations to Te Atiawa, Ngāti Tūwharetoa and Ngāti Maniapoto, Veranoa lives in the papakāinga (village) at Waiwhetū marae in the Hutt Valley. Her teaching reaches beyond New Zealand, with students taking classes online at the Hetet School of Māori Art from as far away as New York or Dubai, eager to learn how to make kete (baskets) and kākahu (cloaks). The school was started in the papakāinga by Veranoa’s late mother, master weaver Erenora Puketapu-Hetet, and her father, master carver Rangi Hetet. Now, Veranoa teaches entirely online.

At the marae, the houses of the papakāinga surround a wharenui called Arohanui ki te Tāngata, built by Veranoa’s maternal grandfather, Ihaia Puketapu, after he won a fight with the government to have the land returned to Te Atiawa. Puketapu wanted his community to be able to live in a traditional marae setting, with homes for extended family surrounding the wharenui. “One thing my grandfather wanted to prevent was what the government called ‘pepper-potting’—where they’d place a Māori family in the neighbourhood of Pākehā people so that Māori could be assimilated,” says Veranoa.

Puketapu had a vision of building a meeting house for all people. He had spent time at Parihaka, with his uncle, pacifist leader Te Whiti, and, as the story goes, “had a dream of this great meeting house at the head of the fish”—that’s the lower North Island—“with the exterior reflecting Pākehā and the interior Māori”.

To enter Veranoa’s home is to walk into a house full of stories that reach across generations. The walls hold traditional and contemporary art, but some of the most deeply personal work is out of sight.

Packed away safely are korowai made for Veranoa’s mokopuna (grandchildren), kahu kiwi (cloaks made of kiwi feathers) woven by her mother Erenora, and a double kaitaka that Erenora started, but never finished. Veranoa completed it with her daughter several years after Erenora’s death. “A kaitaka is one of the supreme garments you can weave,” she says. “It has no adornments, no feathers, no hukahuka [tassels]—it’s the hardest thing to weave because the weaver is baring herself. There’s nothing to hide the preparation of her materials, the tension of her weave, the straightness of her rows. The hands of three generations are in this cloak.”

Veranoa teaches using only universal tribal patterns, to protect knowledge held by specific iwi. Although the switch to online teaching comes with a heightened risk of cultural appropriation—people using the craft in ways it’s not supposed to be used—Veranoa says that education “overwhelms the fake, the slap-up souvenir stuff” and leads to greater respect for the art form. “It’s giving people a greater understanding of what we do and why we do it,” she says. “Also, when students see weaving that isn’t authentic, they know. Because they know what’s real.”

When Māori families want to commission Veranoa to make a cloak for them, she usually responds with an offer to teach someone within the whānau. One of her greatest hopes is for every Māori family to have their own kākahu made by someone in their family. It would mean each family not only had an authentic cloak, but the knowledge of how to create it.

This sense of legacy is what drives Veranoa to keep working. “I always feel quite emotional knowing that this cloak I made is going to outlive me—it’s going to be here long after I’m gone. It’s a big thing to leave a taonga that every time it is worn takes on the mana of the occasion and the mana of the person wearing it. A kākahu is different in that the older it gets, the more value it has.”

The exhibition Veranoa Hetet: Creating Potential is on display at the Dowse Art Museum in Lower Hutt until February 28, 2021.