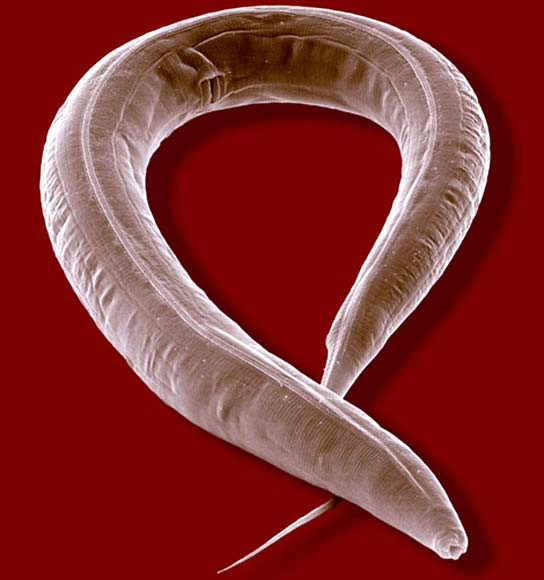 The 2002 Nobel prize for Medicine or Physiology—biology’s highest accolade—was awarded to Sydney Brenner, John Sulston and Robert Horvitz for their discoveries concerning “genetic regulation of organ development and programmed cell death.” Sound obscure? Perhaps. Important? Absolutely—yet most of the research was conducted on a tiny worm.

By the early 1960s, biologists had realised that heredity is based on genes, that genes are made from DNA, and that chromosomes are where genes are carried in the cell. They had also learned that each gene contains the instructions to build one protein, and that proteins are the real building blocks and workhorses of life. These discoveries form the cornerstone of modern biology.

But that is not all there is to it. While every cell in the human body contains the same DNA, it is obvious that not all cells are the same. Skin cells differ from eye-lens, liver and bone-marrow cells. Yet if they all have the same DNA, how come they differ? The answer is that different sets of genes are turned on in different cell types, specifying the manufacture of different sets of proteins.

Finding out how genes are regulated—how they are switched off and on, and how protein synthesis from individual genes is ramped up or curtailed—has become a major focus of research. Two especially challenging areas for biology are development and the nervous system.

Every organism arises from a single fertilised cell, yet an organism such as a human being contains hundreds of cell types, and the cells are arranged in a very specific and complex pattern. How does this happen? This is the development problem.

Within the human body, the brain and central nervous system have proved the most difficult systems to understand. How do we sense and respond to things not only physically but also emotionally? Where do reasoning, abstract thought and consciousness come from? How does something as complex and sophisticated as the human mind develop and function? This is the nervous system problem.

UK biologist Sydney Brenner realised that although understanding human development might be the ultimate goal, it would be easier to start unpicking such a complex process in a much simpler life form.

Brenner cast about and hit on the tiny soil-living nematode worm Caenorhabditis elegans as a model organism. The worm develops from an egg into a 1 mm-long adult over three or four days, lives for three weeks and grows readily in the laboratory, where it can be raised in a Petri dish and fed on bacteria. There are two sexes: a self-fertilizing hermaphrodite and a male. The adult worm essentially consists of a tube—the exterior body sheath—containing two smaller tubes—the digestive tract and the reproductive canal.

C. elegrms has a nervous system with a brain of sorts: the circumpharyngeal nerve ring. It exhibits behaviour and is even capable of rudimentary learning. Neural structures include a battery of sense organs in the head and tail which mediate responses to taste, smell, temperature and touch, and although the worm has no eyes, it can respond to light. It produces sperm and eggs, mates and reproduces. After reproduction it gradually ages, loses vigour and finally dies. Pretty similar to humans and most other animals, really—which is the point.

C. elegrms has two other advantages as an experimental subject. It is transparent, so all its cells can be viewed under a light microscope; and it can be frozen for storing without damage, and thawed as required.

Nematodes, or roundworms, are an important group in their own right, although their pervasiveness was not realised by Brenner when he settled on C. elegans. They are perhaps most familiar as the parasites that infect the guts and lungs of farm animals, controlled by drenches.

Other species—and there are myriads—are free-living in soil or aquatic environments, or infect plants, fungi and non-farm animals, including humans. Guinea worm (caused by the metre-long Dracunculus medinensis), filariasis (and its extreme form, elephantiasis), and African river blindness are all examples of serious human diseases caused by nematodes.

Nematodes are now thought to be the common­est organisms of the deep ocean floor—earth’s most extensive habitat. It has been suggested that every kind of animal on Earth harbours at least one species of nematode unique to itself—its own personal parasite.

In 1974, in a paper that was one of the first steps along the worm path, Brenner described how he had induced mutations in genes which affected organ development in C. elegans and had been able to follow the alterations to the organs under the microscope. Many research groups around the world have since adopted Brenner’s worm and worked at unravelling its secrets. It is now the best-understood multicellular organism on the planet.

What has been learned? The lineage of every cell in the adult has been mapped from the single-celled egg. Through cell divisions, the fertilised egg gives rise to exactly 1090 cells, although 131 of these always die during the development of the organism, resulting in an adult hermaphrodite containing 959 cells.

This cell death is interesting. Not only does normal existence require cell division to generate new cells as older ones become damaged and wear out, but cell death is also necessary for organisms to maintain their correct size. In an adult human being more than a thousand billion cells are created every day. At the same time, an equal number of cells die through a genetically determined suicide process known as programmed cell death.

It was in C. elegans that the first genes controlling cell death were discovered. John Sulston, also of the UK, worked on determining the cell lineage for a part of the developing nervous system, and found that cells in every nematode examined underwent the same programme of division and differentiation. He also made the seminal discovery that specific cells in the lineage always die through programmed cell death, and that this process can be monitored in the living organism.

US biologist Robert Horvitz continued Brenner’s and Sulston’s work on the genetics and cell lineages of C. elegans. In a pioneering publication in 1986, he identified the first two “cell-death genes.”

Horvitz later identified another gene that protects against cell death and still more genes that determine how dead cells are eliminated. He also found that the human genome contains a gene similar to one of the nematode cell-death genes. Indeed, it turns out that there are human equivalents of most genes involved in controlling cell death in C. elegans.

Programmed cell death, or death by design, has been found to be widely important in development. For instance, if it didn’t occur in our hands in utero, instead of fingers we would have paddles on the ends of our arms.

Cell-death genes have assumed increasing importance beyond the realm of development. Although cancer has been traditionally regarded as a disorder in which cells divide uncontrollably, it could also be argued that the rogue cells simply fail to die as they should. There is considerable scientific interest in finding ways to stimulate cell-suicide processes in diseases such as cancer and auto-immune disorders.

On the other hand, there are numerous maladies, such as AIDS, neurodegenerative diseases, stroke and myocardial infarction, as a result of which too many cells die, and in these cases it would be desirable to turn off the suicide genes.

Sequencing of the 100,258,171 base pairs of DNA that make up the worm’s genome has been completed, and an astonishing 19,000-plus genes have been discovered. Compare this figure with the 30,000 known human genes. The genome of C. elegans contains much less “junk DNA” than the human genome, and usually only a single copy of each gene. This greatly simplifies sequencing and analysis of gene function.

“Brenner’s worm is now the best-understood multicellular organism on the planet”.

With all this information to hand, scientists now seriously consider the humble roundworm a model organism for quite a few human medical studies—for example, studying Parkinson’s disease, a neurodegenerative disorder characterised by the death of neurons which use the neurotransmitter dopamine. The basic biochemistry of C. elegans neurons is very similar to that of vertebrates, including humans. All that is lacking is the complexity that results from huge numbers.

A growing number of medical research teams have also begun to use the worm to help understand the genes underlying human congenital disorders such as spinal muscular atrophy, polycystic kidney disease, muscular dystrophy and Alzheimer’s disease.

While sequencing of DNA has become quite commonplace, it is from discovering the functions of genes that further insights will come. Ascertaining gene function has not been easy, but a new technique holds promise. When C. elegans is fed bacteria containing double-stranded RNA homologous to the messenger RNA that codes for a specific protein, it “silences” the gene concerned. Deficiencies in the organism can then be examined.

Using this technique, 86 per cent of the 19,427 computer-predicted genes in C. elegans have been inhibited—the first systematic functional analysis of the genome of a multicellular animal. Some 305 genes that cause reduced accumulation of body fat have been identified, along with 112 that increase fat storage. Many of these genes encode proteins related to known receptors, transport molecules and enzymes involved with signalling pathways that are good candidates for drug development. There are close human equivalents of over half of all genes present in C. elegans, thus the worm is contributing to research into human obesity.

Although we are still unravelling the complexities of vertebrate development and the brain—guided by results from ‘the worm’—there is a suspicion that the greatest biological enigma of all, consciousness, is absent from C. elegans—although this remains to be proved. Perhaps the humble roundworm knows more than we think.