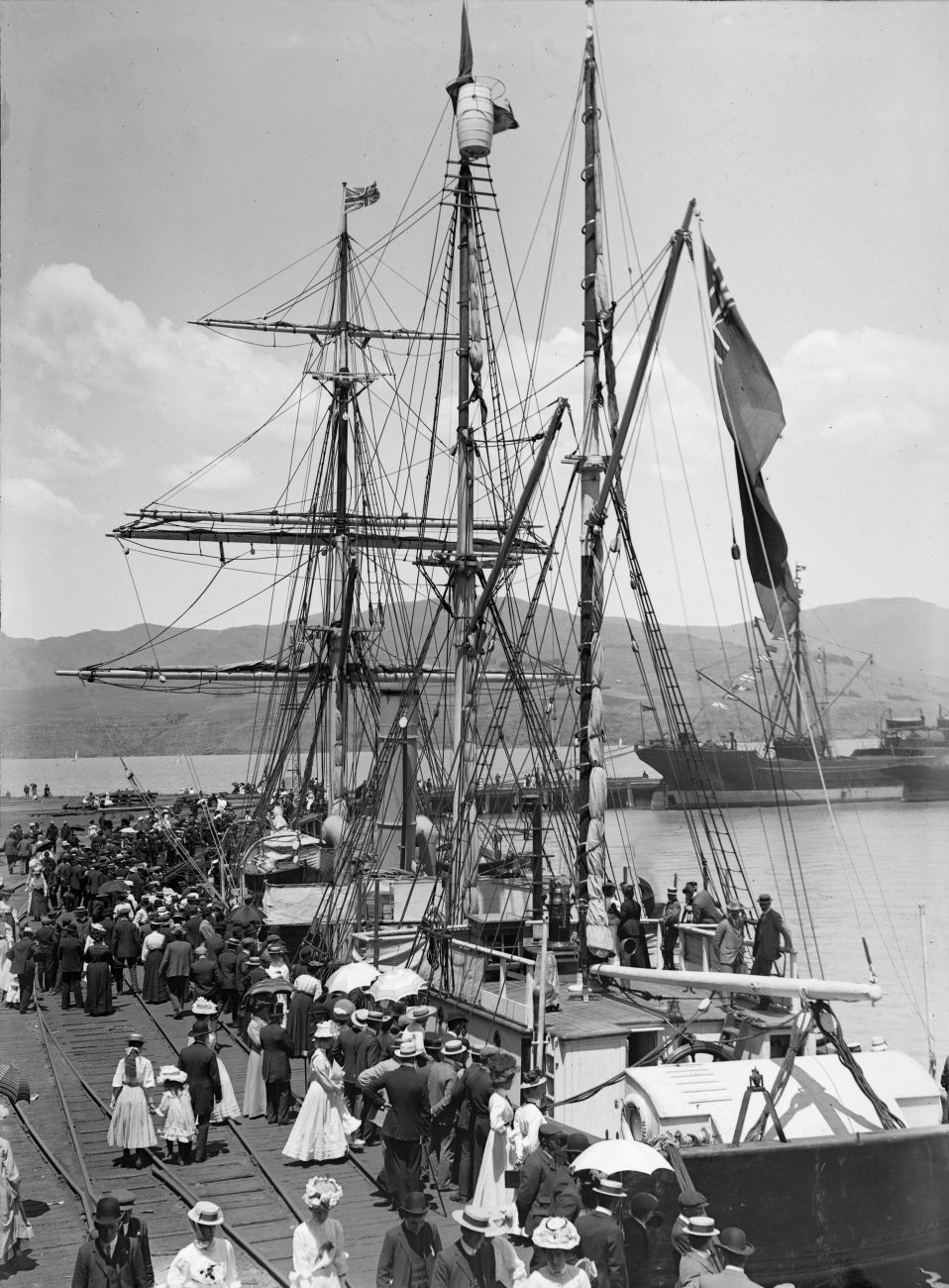 All day, sightseers had been streaming across the gangway at Lyttelton to poke about Nimrod’s cluttered deck, gazing at cases of maize and stored coal, Norwegian sledges, bales of hay, and tins of carbide for making acetylene gas. The visitors squeezed forward to the fo’c’sle, where the expedition’s huskies, supplied by a breeder on Stewart Island, lay panting in the hot sun. They lingered over the ten Manchurian ponies, fresh from a seven-week training stint on nearby Quail Island, that stood patiently in their stalls. And amidships, they took in the large crate, secured by chains, in which was packed a much-modified Arrol-Johnston motor car fitted with an air-cooled engine and Simms-Bosch magneto ignition. Even greater chaos reigned below where, in the converted aft hold, bunks for the 15-strong shore party were piled with luggage, and a jumble of scientific instruments and personal belongings all but blocked the gloomy passageway.

Ernest Shackleton, a veteran of Robert Scott’s 1901-04 Antarctic expedition, was returning to the ice at the head of his own expedition, in a bid to reach the South Pole. Minutes before Nimrod’s scheduled 4pm departure, a breathless George Buckley pushed through the crowd of well-wishers and clambered aboard wearing a thin summer suit and carrying a single bag. Just two hours earlier, Shackleton had agreed to take the pleading Buckley as far as the ice, and the Ashburton sheep farmer had dashed for a train to arrange power of attorney in Christchurch and throw some underclothes together. “Surely a record in the way of joining a Polar expedition,” Shackleton was later to write.

At the appointed time, Nimrod cast off, and to the cheers of onlookers made its way through a Regatta Day flotilla of excursion steamers, motor launches, and yachts, the larger vessels listing alarmingly as passengers strained to catch a last glimpse of the Polar explorers. As they reached the lighthouse, guns fired and the air was pierced by shrill steam whistles and ships’ sirens. The band on the flagship HMS Powerful, one of three Australia Station vessels in port, then struck up ‘Heart of Oak’ and ‘Auld Lang Syne’.

“I think that the enthusiasm displayed today is unparalleled in the history of Polar exploration,” Shackleton told a reporter. “I am deeply touched.”

Once clear of the harbour, the overloaded Nimrod picked up a tow cable from the tramp steamer Koonya and began its laborious 2655-kilometre journey south. Shackleton’s vessel, an ageing Newfoundland sealer, could not carry enough coal for the return trip, so it was to be towed to the ice courtesy of the New Zealand government and the Union Steam Ship Company.

In accordance with exploring tradition, Nimrod had no money aboard, apart from a coin nailed to the mainmast. It did, however, carry a consignment of mail sent by souvenir hunters keen to have a postmark from the world’s most southerly post office. New Zealand had issued its first Antarctic stamps to mark the occasion, and in addition to his burdensome duties as expedition leader, Shackleton had been appointed postmaster of King Edward VII Land.

Shackleton did not reach the South Pole—that would not happen until Roald Amundsen’s attempt in 1911. But members of his expedition did make the first ascent of Mt Erebus and discovered the approximate location of the South Magnetic Pole. On January 9, 1909, he and three companions reached a record southern latitude. They were within 160 kilometres of their goal.