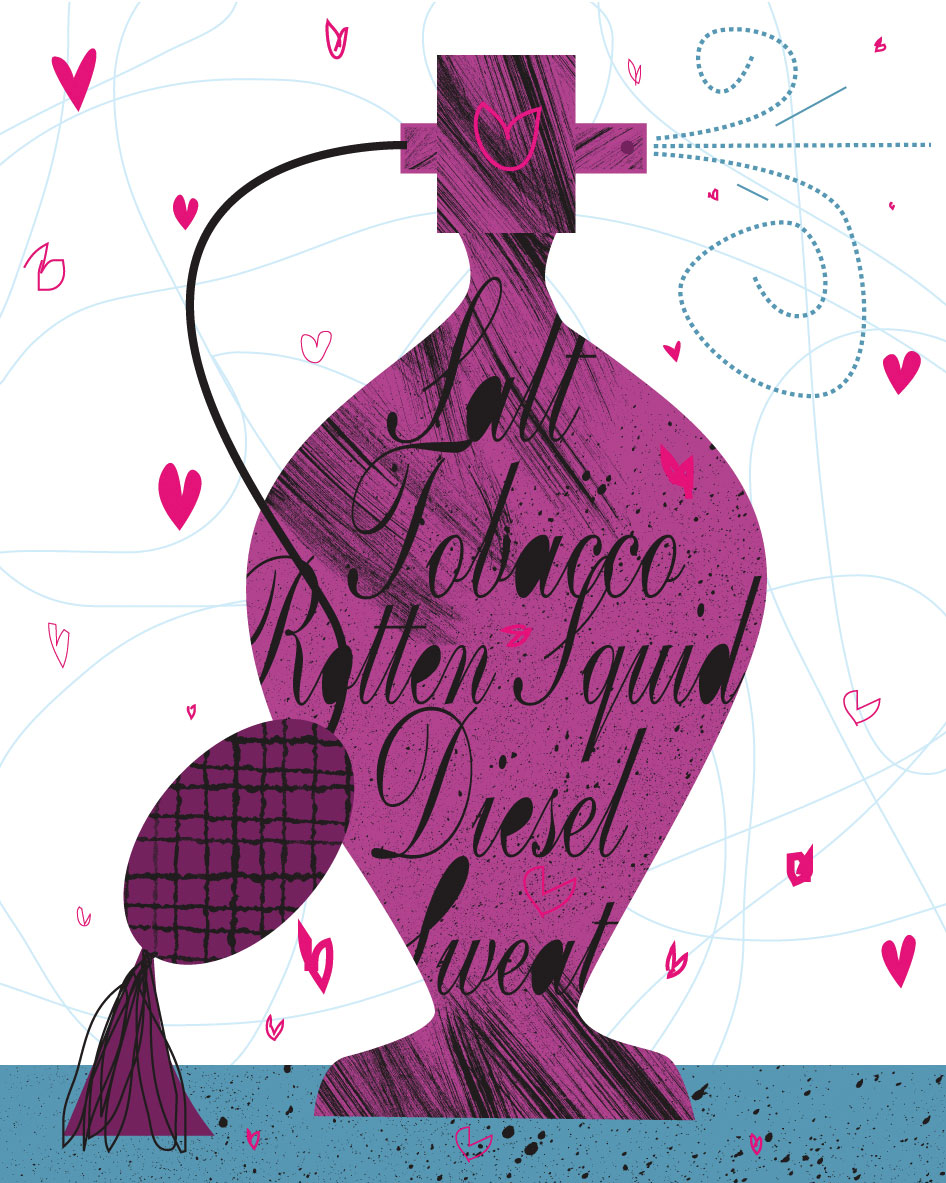 I run the local library, and the other day noticed someone pick a book off the shelf and take it to their nose. Judging a book by its odour? I’m a sniffer myself, one of those irritating people who always sniffs the milk before pouring. It’s not that I’m dairy wary, I sniff lots of things: pencil cases, shells, hats, new CDs.

As kids, my sister and I invented a game called Sniff, which we’d play on stinking-hot summer nights in the kitchen. Olivia would go first: blindfolded with a dishtowel, she’d wait on the kitchen stool while I poked through the cupboards, then she’d sniff whatever I placed in her hands and had three guesses. If she failed, she’d have to taste it—a Tabasco-covered marshmallow is hard to identify by feeling or smell.

“Wrong answer,” I’d say, and she’d have to eat the nasty morsel (because, of course, that’s big sister’s rule).

Then it was my turn on the stool, and I’d hear her rustling alarmingly in the back corner of the fridge, where food goes feral.

There’s heaps to read about the physiology and psychology of olfaction. Some articles claim that all human response to smell is learned and that we aren’t hardwired to dislike any smell, which surprises me. I’d assumed there must be universal smell preferences—surely everyone is revolted by the funk of rotten fishguts and vomit and poo. Three of my fisherman husband’s staunchest boat rules support this premise: no dirty gumboots down the fo’c’s’le, no chundering in the wheelhouse, no skiddies in the loo.

I recently finished a book called The Scent Trail by Celia Lyttelton, in which the author explains the chemistry of perfume. Music and scent share the same language: perfumes are symphonies composed with notes—base notes (enduring); top notes (floral and light); middle notes (aka heart notes). Lyttelton travels the world seeking out the source of each ingredient in her bespoke perfume, and waxes lyrical over the smells of different places.

If Stewart Island came in a wee crystal bottle, what would it smell like? There are many odours I’ve encountered on my adopted island home that my snout had never before imagined. I couldn’t have guessed from pictures that seals have a booming skunky pong. It’s difficult to put into words the cacophony of notes wafting from a muttonbirder’s waxing hut, or the confusing revulsion experienced at the nest of a cute fuzzy yellow-eyed penguin. Someday (for therapy) I might write about the rat-spunked ropes I handled one cray season.

Ambergris, which happens to be a key ingredient and standard base note in high-end perfumes, is a smell I associate with Stewart Island, where one finds the valuable sperm-whale chunder on the western beaches. When I say “one finds”, I don’t speak from experience, as I have yet to locate the stuff myself. But I’ve come close.

Last year, I followed the instructions to pick up “anything that looks and smells dodgy”, dutifully bringing a brown lump back to the boat and administering the match test—ambergris won’t burn, it melts. The upshot is that my husband’s No Chundering In The Wheelhouse rule has since been amended to No Chundering Or Lighting Deer Turds On Fire In The Wheelhouse. Meanwhile, he’s found a few lumps of the real McCoy, and while it smells weird—and I mean bad-weird—it’s hard to stop sniffing it. Part of your brain squawks this is nasty and the other part squeaks but I like it.

One of my strangest olfactory island moments arrived with one of the world’s weirdest (and rarest) birds. Sirocco the kakapo spent several months on Ulva Island in Paterson Inlet prancing in front of tourists. This large flightless nocturnal parrot species has a strong, sweet scent, and while I was observing Sirocco, the guide passed around some of his droppings (the parrot’s), which emitted a lovely piney fragrance—like Christmastime potpourri.

Stewart Island is a wonderful and wild place that has turned a lot of my assumptions inside out (that I’d eventually settle in an air-conditioned apartment in a big city with some urbane type, for instance). Here I live in a naturally cool locale, a fisherman’s wife, waxing rhapsodic over the aromatic merits of spew and poo.

Which brings me to one of my favourite scent symphonies. Tobacco, whisky, diesel, sweat, the tang of salt, and yes, a faint heart note of rotten squid. When my nose is pressed into my fisherman’s jacket, I know he’s home safe.