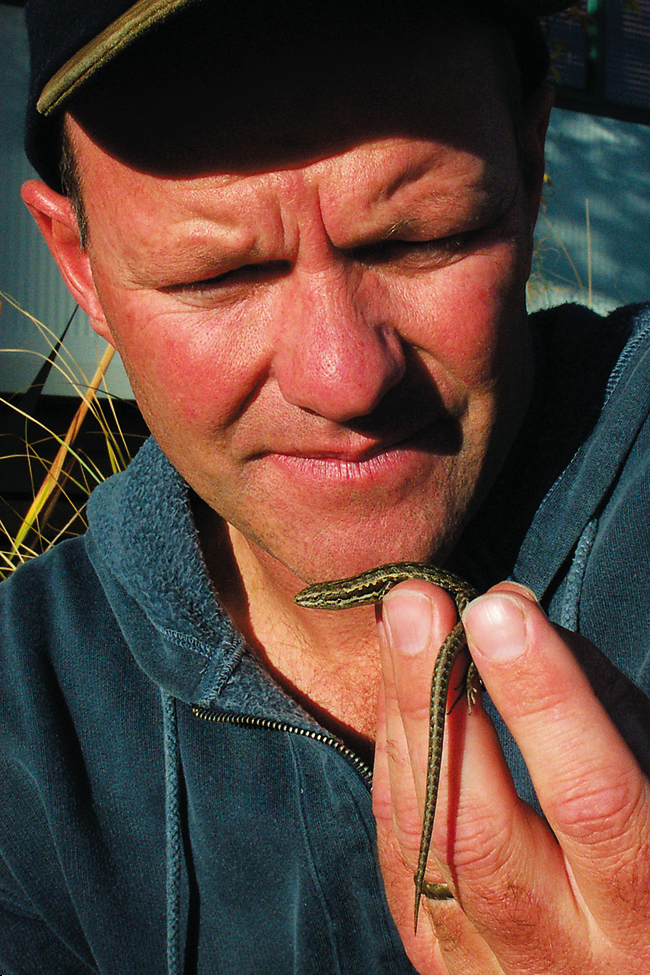 They can disappear in a flash, darting between rocks and into crevices, or vanishing under bushes, perfectly camouflaged. But for all their skill as reptilian Houdinis, one day our native grassland skinks may disappear for good. A seemingly innocent herbivore, the rabbit, is playing a major role in their demise, and Landcare Research scien­tists say keeping rabbit numbers in check is a key step to ensuring the skinks’ survival.

Landcare ecologists have been looking closely at three skink species, all of the Oligosoma genus and all found in various parts of the South Island and the lower half of the North Island. McCann’s skink, O. maccanni, prefers rocky open spaces with herbs and shrubs, O. inconspicuum, the intricately patterned cryptic skink, favours herb and shrub areas and can tolerate damp conditions, while O. nigriplantare polychroma, the common skink, is found in grasslands. Farmers and herpetologists have noticed that, like other New Zealand skink species, these animals have greatly declined in range and number in recent times.

How can a herbivore play a role in the decline of a lizard? Their impact is indirect, but significant nonetheless. Rabbits are predated by feral cats and ferrets—which also eat skinks. High numbers of rabbits in an area support high numbers of predators. Also, rabbits eat down the skinks’ grassy habitat, making it easier for these predators to catch the skinks. Sudden declines in rabbit abundance, such as after 1080 poison drops or outbreaks of Rabbit Haemorrhagic Disease (RHD) are a further problem because they lead to cats and ferrets switching from eating rabbits to eating skinks.

Landcare Research ecologist Grant Norbury says that as skink densities reach low levels, which they routinely do, predation has the potential to drive skink populations to extinction.

Predator numbers eventually decline in response to a sudden drop in num­bers of a preferred prey species, but this takes time. This lag time is the real danger time for skinks, says Norbury­ they get “absolutely slaughtered” by ferrets and cats over these months.

Like most endemic vertebrates, New Zealand’s skinks do not breed quickly enough to bounce back after serious predation events. Unlike most skinks overseas, almost all skinks in this country bear live young, usually only two to five a year. At that reproductive rate, skink populations cannot withstand the onslaught of hungry predators that have run out of rabbits.

“It is crucial that farmers and local authorities bear this in mind when controlling rabbits, and aim to keep rabbit numbers at low, stable levels to avoid causing predators to switch to eating skinks,” says Norbury.

Norbury’s interest in protecting skinks had humble beginnings. “My colleagues and I were looking at cat and ferret droppings to see what they had been eating. We were horrified to see all these little skink feet in them. We divided the number of feet by four to get a rough estimate of how many skinks had been consumed. One cat had eaten at least 35 skinks following a rabbit-control operation. A single ferret scat had evidence of 19 lizards in it.”

The amount of predation surprised Norbury. How could fleet-footed skinks be taken in such large numbers? “It was a real puzzle to us. Common skinks are out in the daytime, but ferrets and cats feed mostly at night. Was there something about skink behaviour that made them vulnerable? Did the predators actually dig skinks out of burrows and other hiding places?”

Norbury and his colleagues devised an experiment to find out more about how skinks are being caught. They set up two fenced enclosures not far from their office in Alexandra, into which they placed a number of McCann’s skinks. Into one plot they introduced a ferret. Overhead wires kept out harriers, which are also predators of skinks.

“We thought the ferret would decimate the skinks in its plot. But to our surprise the ferret caught only one skink. We realised that introduced thyme bushes on the plots provided great skink hiding places.”

When the researchers removed the thyme bushes, many more skinks were eaten. More native chafer beetles were also eaten.

It seems that suitable vegetation is a key factor in skink survival. The plants may be native or introduced species (such as thyme). Even species which have become weeds in many areas are still beneficial to some species of skink.

In islands such as New Zealand, where introduced predators are endangering native species, the traditional conservation approach has been to try to control predator numbers. But it is becoming clear that predators are only part of the problem.

For skinks, the long-term solution must also involve keeping rabbit populations at low levels and discover­ing how best to provide adequate refuges in skink habitat.

Norbury is optimistic that further research will furnish solutions that will benefit vulnerable native prey such as skinks. “Science can provide advice on how to manage levels of preferred prey, such as rabbits. It can give us tools to help control predators and information on how best to adjust the environment to reduce predation risks for skinks.

“In these ways we can help the sinuous skink to a more secure future.”