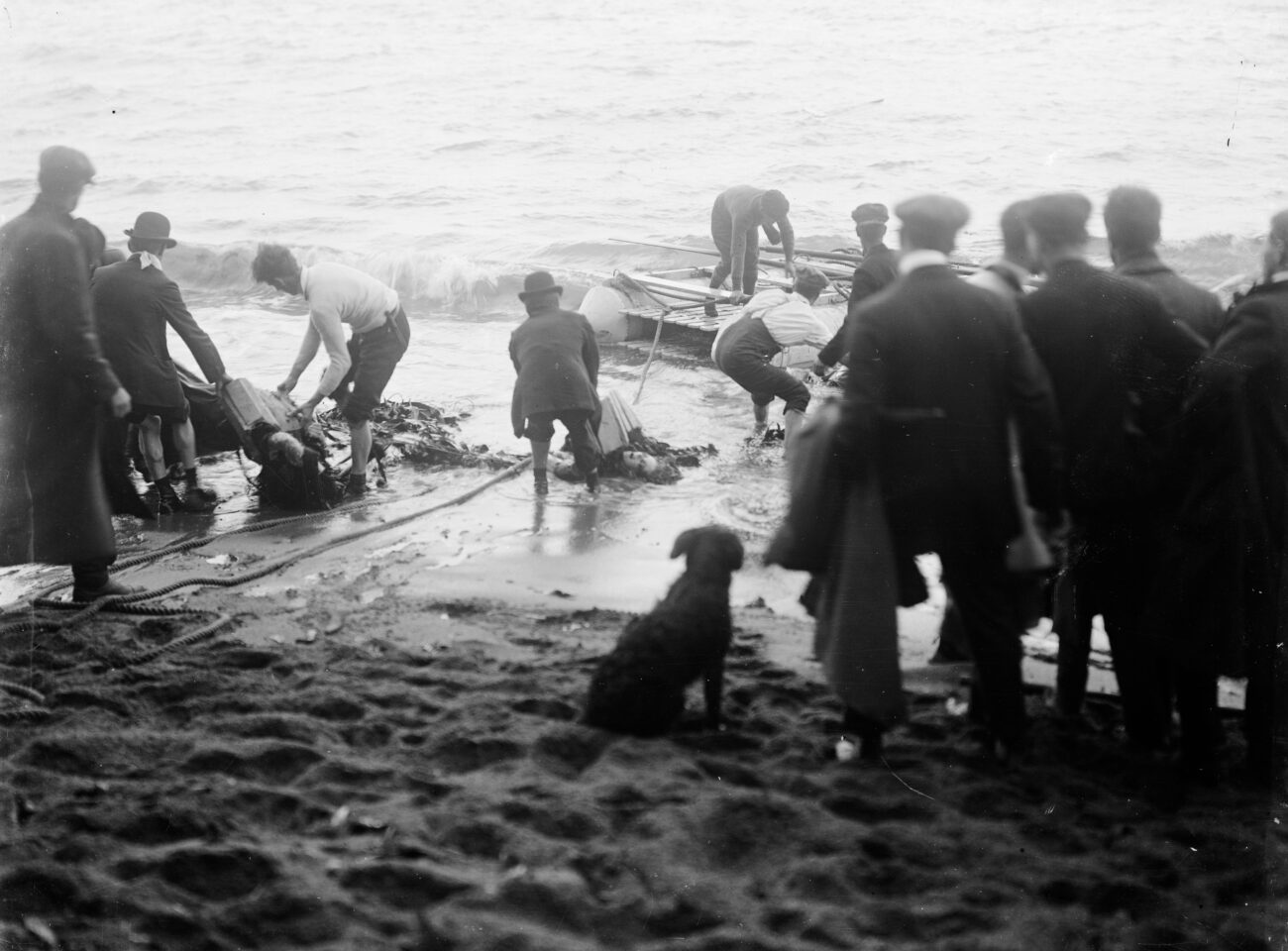 Early on the morning of Saturday, February 13, 1909, two Wellington constables were shaken awake and sent out on horses to scour the southern coast for survivors of a reported shipwreck. Just before reaching Karori Stream, they saw someone walking toward them, head down and silent. It was Captain Francis Naylor, on his way to report the loss of his vessel, the Union Steam Ship Company’s steamer Penguin. One of the last to leave the vessel, Naylor, who had taken up his post just two months earlier, had spent an anxious time in tempestuous seas clinging to a broken lifeboat before staggering ashore on a narrow beach in pitch darkness and rain at 3am.

Dawn broke to reveal heartrending scenes along the inhospitable coast. Through the mist, bodies could be seen floating in the water, or lying at the water’s edge amid the tangle of seaweed. The foreshore was littered with flotsam: smashed lifeboats, lifebelts, settees and cushions, cases of tomatoes and personal effects. In one place the body of a stewardess was found, still in her duty uniform and white apron. Most distressing was the fate of the children aboard the Penguin, all of whom perished.

Many of the vessel’s passengers and crew survived hours in the water only to be dashed against rocks and reefs by the churning waves as they attempted to reach land.

The ordeal of pregnant Ada Hannam, the only female survivor, was especially poignant. She was found under an upturned lifeboat with her dead youngest child, trying to dig her way out as the tide rose. Having lost her other three children and her husband in the tragedy, she was praised for helping to save others. (The son she was carrying would later embark on a successful career at sea.)

The Weekly Graphic called the photographs it published “probably the saddest things that have ever been recorded in these pages”. Bodies were roughly covered with blankets and lifebelts, many with bare feet protruding. Such images, never before seen in New Zealand’s press, were criticised for bringing home the reality of a disaster in a way that, in the words of the Graphic, “is only too pitilessly revealed by the camera”.

When the Penguin’s ropes were cast off from Picton’s wharf at 6.20pm the previous night, nothing was amiss. Once clear of Tory Channel, the steamer met the familiar sou’easterly wind and choppy seas of Cook Strait. By 9pm, the weather had closed in, with heavy rain cutting visibility. Unable to see the light on Pencarrow Head, Captain Naylor altered course to keep the vessel well clear of land. What he didn’t know was that there was an exceptional tidal flow that evening, which had pushed the vessel off course. Just after 10pm a sound, likened to the ripping of a gigantic sheet of calico, reverberated through the hull, and Naylor ordered all hands on deck.

It soon became clear that the Penguin was doomed.

Lifeboats were swung into the water to take the women and children. In a sad twist of fate, the boats proved to be a death trap—all either capsized or came to grief on the rocks. The men aboard rafts fared better.

What sank the steamer remains a mystery. One possibility is that it hit the remains of the Rio Loge, a brigantine that had disappeared weeks earlier. But the most likely explanation is that it struck a semi-submerged hazard called Thoms Rock. In all, 46 passengers and 26 crew died, making it New Zealand’s worst shipping disaster of the 20th century.

The wreck of the Penguin has never been found.