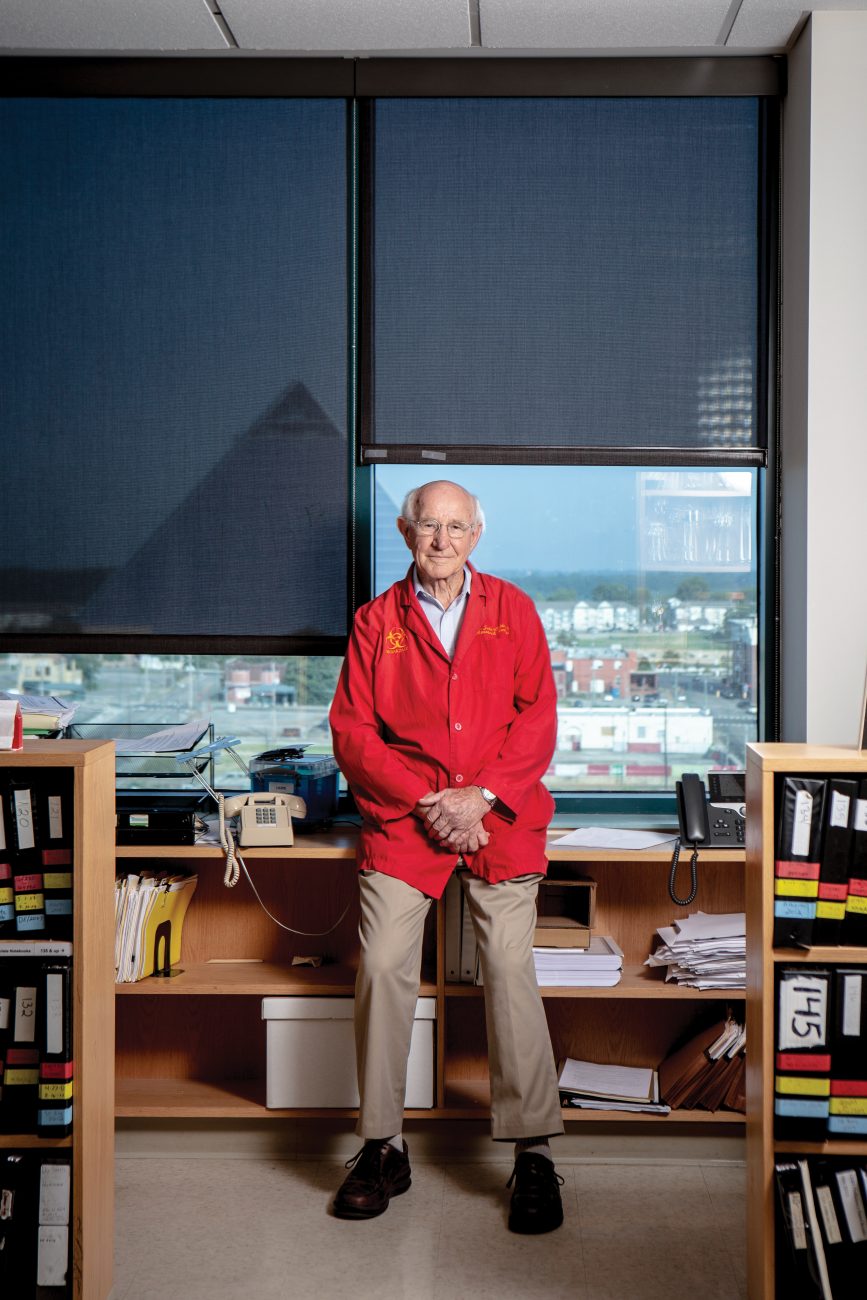 There is perhaps no protest sign more synonymous with the African-American civil rights movement than the Memphis sanitation strikers’ bright-red ‘I AM A MAN’ placards.

On March 29, 1968, thousands of people marched with the city’s sanitation workers, who were fighting to broker better work and pay conditions. Somewhere among the crowd, carrying one of the iconic signs, was a 35-year-old virologist from Balclutha.

“That really comes from a sense of fairness,” says Robert Webster. When the protests took place, he had only recently moved to Memphis to take up a position at St Jude’s Children’s Research Hospital. Fifty years later, Memphis is still home for Webster, and the young Kiwi scientist protesting racial inequality has become one of the world’s most-renowned virologists.

Webster, now aged 86, has dedicated his professional life to understanding the relationship between animal, bird and human influenza, making key discoveries that have led to the development of new vaccines, such as Tamiflu. His work has inspired the nickname Flu Hunter, which is also the title of his recent autobiography.

“I probably couldn’t have had a more exciting career,” Webster tells New Zealand Geographic. “It’s been a real adventure, I tell you.”

Despite a lifetime of research so far from home, Webster remains a true Mainlander. His accent, with its distinctive heavy vowels, reflects his Otago roots. He blames a slight limp on an old rugby injury he picked up playing hooker for South Otago High School’s 1st XV.

Born in Balclutha, Webster grew up on a dairy, sheep and grain farm in the Clutha River Valley, with no electricity and 12 brothers and sisters.

“The advantage of growing up in a really big family is it makes you competitive, which has helped me,” he says.

He began studying chemistry at the University of Otago, on the recommendation of a half-brother, but his dislike of mathematics, and an inspirational lecture by microbiologist Molly Marples, led to a switch to microbiology.

After his studies, in the early 1960s, he set up the first virology lab for the New Zealand Department of Agriculture in Wallaceville, Upper Hutt, isolating and recording a range of animal diseases for the first time in New Zealand.

“It made you realise there was a vast number of viruses out there not really receiving a great amount of attention,” he says. “There was an almost-untapped field of science.”

In 1964, he took a job in the microbiology department of the renowned John Curtin School of Medical Research at the Australian National University in Canberra, where he assumed he was going to continue studying animal diseases. There, his scientific life changed for good.

“When I arrived, I remember sitting in my new boss’s office and he told me, ‘You’re going to work on influenza’. I was disappointed, but that’s where it all started.”

Webster’s dismay evaporated as he made breakthroughs alongside Australian microbiologist Graeme Laver, with whom he formed a lifelong research partnership.

Little was known about flu pandemics at the time. Half a century earlier, the 1918 Spanish influenza had killed up to 20 million people around the world, but the origin of such outbreaks was unknown.

One of Webster and Laver’s most significant discoveries occurred during a walk along a New South Wales beach together.

He and Laver showed, for the first time, that there was a connection between bird flu and human flu. Webster also demonstrated that the combination of bird and human flu strains was all that was required for a pandemic to begin.

Later, Webster worked on reducing the flu virus component in vaccines—meaning fewer patient side effects—and studied two subtypes of flu virus: H1N1, known as swine flu, and H5N1, or bird flu. Testament to his rural Kiwi roots, it was only in the past decade that he stopped putting in long hours at the lab. But he still has an office at St Jude’s—there is a stuffed groper above his desk, and the room is filled with photos from fishing trips, including a picture of his biggest catch, a 60-kilogram halibut he hooked in Alaska.

Memphis has been home for Webster and his New Zealand wife, Marjorie, since 1968, apart from a six-month break following the assassination of Martin Luther King in the city—“we felt it was too dangerous”—and they’ve brought up three children there. Trips back to New Zealand are rare now, though 2005 saw them endow the Webster Family Chair in viral pathogenesis at the University of Otago.

Webster says his proudest achievement in Memphis is bringing dozens of young virologists to work alongside him at St Jude’s—Kiwi protégé Richard Webby is one.

Given how much Webster has added to our understanding of flu, it seems as though this one-time farm boy may have got the upper hand on the disease.

“Oh, no, no,” he says, with a firm shake of the head. “You’ve never got the upper hand. We thought we were getting on top of it with bird flu, and predicted the next pandemic was going to be bird flu. What happened? We got an H1N1 out of Mexico. Oh, no, you’ve never got it beaten.”