Shortly after midnight on December 14, 1991, a seismograph at Twizel recorded shock waves which in 20 seconds reached the magnitude of a 3.9 earthquake. But this was no earthquake. Seventy-five kilometres away, the top of Mt Cook was collapsing. An awesome rock avalanche had let rip, dislodging 14 million cubic metres of rock buttress and glaciers, and sending them on a wild cascade 2720 metres down the mountain.

The majestic East Face, the summit of New Zea­land’s highest mountain, was transformed. A giant had toppled in a frantic hail of rock, snow and ice which at times reached speeds of 450 kilometres an hour. Twizel recorded the faint falling of rocks for hours afterwards.

The avalanche also dislodged one of the more easily assimilated pieces of Kiwi trivia. Generations had learned that Mt Cook was 12,349 feet high—so easy to remember, it seemed incontrovertible. Its metric equivalent, 3764 metres, never sat so easily in the cerebral filing system.

The mountain is falling down under its own weight, but scientists are matter-of-fact about this. “All our mountains are unstable, and a mountain falling down is not an unusual phenomenon,”Christchurch DSIR geomorphologist, Dr Mauri McSaveney says. “It’s something that’s been happening for thousands of years.”

On its upper slopes, the mountain does not have the glacial ice flow which causes erosion lower down. Rock falls are the only means of erosion. The December avalanche did away with the theory that the high peaks of Cook were high because their rock was slightly stronger than that lower down.

Like many mountains in this area of the Southern Alps, Mt Cook is made of sedimentary rock called greywacke—very hard sandstone and siltstone which is about 200 million years old. The giant rock fall gave scientists a rare opportunity to look inside the mountain, and Mc­Saveney was amazed at how fractured and weak it really was. The loose, shattered rock he saw was what mountaineers call “Weet-Bix”. Mt Cook is not made of stern stuff.

“Yet if anyone had asked me on the Friday (13th December), ‘How safe is Mt Cook?’ I’d have said, ‘Perfectly safe’,” says McSaveney.

That Friday there were two climbing parties in Plateau Hut, about four kilometres from the sum­mit.

Alarms were set for midnight. David Ellis and Nick Shearer planned to climb Mt Tasman. Hall and his three companions were preparing to climb Mt Cook via Zurbriggen Ridge. Their timing was impeccable. A decision to leave any earlier and they would have been right in the path of the avalanche.

“It would have been a spectacular way to go.” Hall can now laugh.

Awaking at midnight, Hall’s first thought was that the wind had come up. He’d gone to bed on a clear, moonless night. Ellis went outside. He, too, heard the sound of wind, but, eerily, there was no air movement. The climbers heard a loud rumbling sound. Hall thought it might be an icefall in the Hochstetter.

From the but windows they gazed at the peaks outlined against a black sky.

“Suddenly, I saw huge yellowy sparks, and realised that it was not ice falling—it was rocks,” says Hall. To Ellis, the sparks and bright green flashes looked like incendiary bombs falling.

The climbers were vious to danger, more fascinated than frightened. Sometimes there are strange sounds in the mountains. Where there are glaciers, rock avalanches are quite common.

“We just didn’t realise the scale of it,” says Hall, “that by morning there’d be a pile of rock at the bottom of the mountain.”

Ellis and Shearer set out across the Grand Plateau away from the sound of rumbling and grinding rocks. By torchlight they could see a fine mist. As they crossed the northern end of the Plateau they began to cough up dust.

“As dawn approached we looked across, and there was this huge dust cloud over the East Face. It hung there until nearly 10 o’clock,” says Ellis.

Daylight revealed that the avalanche had crossed within 500 metres of the but as it curled around and roared its way down the Hochstetter.

On the ridge of Mt Dixon, Hall surveyed the damage. “The scar looked enormous—as if a blanket had spewed down the mountainside and turned it from white to black.”

The 500-metre scar can be seen from some points on the Canterbury Plains, 100 kilometres from the mountain.

Bryan Moore was the first to brave Mt Cook after the avalanche. On January 2, 1992, he went up the Hooker Face in perfect conditions. Perched on the thin inclined sliver of ice at the top, he gingerly sur­veyed the wasteland—the “acres and acres” of loose rock which is now the East Face.

By winter, snow will dignify the Grand Plateau snowfields once more, hiding the chaos beneath. Winter will also bring a veneer of ice and snow to the jagged East Face, but some five years will pass before glacier ice flow carries the last of the debris through the now defiled Hochstetter icefall, and it will be many years before thick glacier ice forms in the scar.

Why the avalanche happened on a calm, clear night is a mystery. The mountain does not yield up its secrets easily, and history is of little help. In 1873 there was a rock fall of similar magnitude on Mt Cook, but McSaveney can find only one reference to it in a scientific journal. It seems it happened in a period where no-one took much notice of such things.

The winter of 1991 was one of the snowiest on record. The most plausible theory is that the movement of ice may have plucked rocks from the mountain­side. If all or part of an apron glacier clinging to a mountain face falls, it frequently takes some rock with it. If this rock is supporting an unstable buttress, the “chock” stone may be dislodged. Then it’s a case of “chocks away!” But any evidence that this happened in the December avalanche would have been swiftly buried.

McSaveney is certain of one thing: it will happen again. The most frustrating thing is not knowing when. “It might take a century, it might happen next week.”

The top of the East Face scar stands at a 70-degree angle. To remain stable, it needs to be around 55 degrees. Bits will continue to fall off, or there’ll be another big fall. The mountain peak will shrink as the sharp feathered edge of ice is weathered to a stable shape. So, for some time to come, it’s pencils only in the record books.

From the Hermitage, Cook’s peaks look little different—a relief, no doubt, to the souvenir sellers. From Okarito in South Westland the moun­tain’s profile is dramatically altered. And if a glacier forms in the face of the scar, the East Face will provide a fresh challenge to the dauntless climber.

“It will need a techni­cally competent climber,” says McSaveney. “This will be a mighty ice climb.”

The new East Face conqueror will need to be sure of one thing: that no rocks have fallen for quite some time. “It could be a rather long wait,” McSaveney says drily. 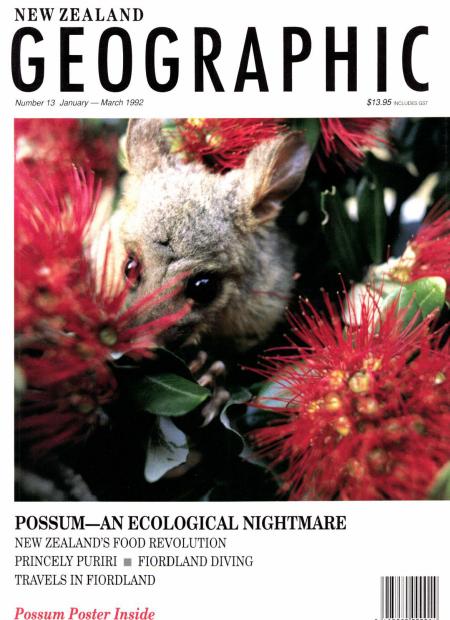