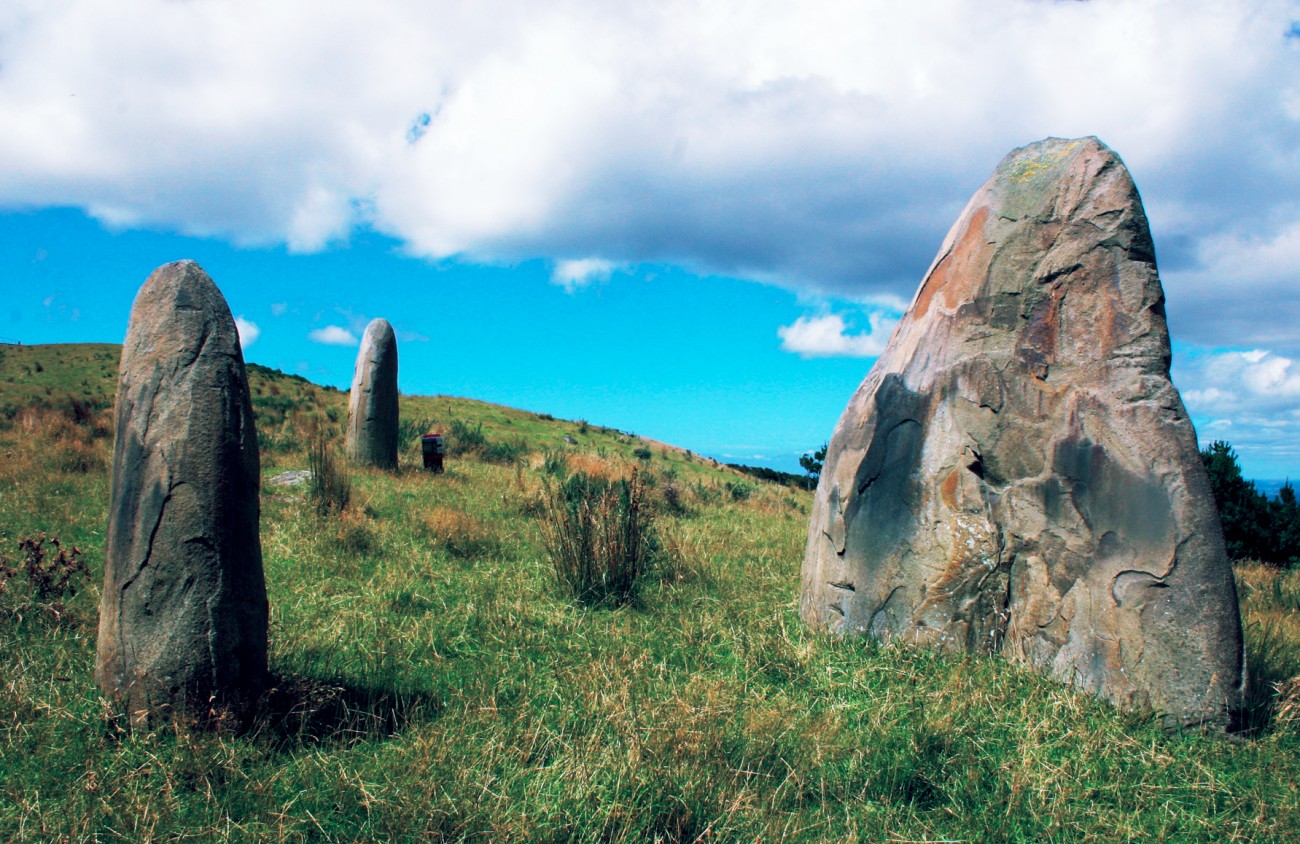 Far too many folk know I was once a geologist. For such folly, I am often quizzed about this or that rocky fea­ture. Some striking roadside forma­tions in Rodney County are a recent case in point.

A certain editor must have had too much time on his hands some months back. He found himself on Rodney Road, a dead-ender running west towards Mount Tamahunga off the summit of the Leigh–Pakiri road, 100 km north of Auckland. The views from here are fabulous, taking in Whangarei Heads and the Hen and Chicken Islands to the north, Little and Great Barrier Islands and the Coromandel across the water to the east, and the islands and head­lands of greater Auckland’s eastern reaches, with the Hunua Ranges beyond, to the south. A picture-postcard spread of Whangateau and Tawharanui Regional Park occupies the southern foreground. The white sands of Pakiri glisten below to the north.

Near the end of the road, the editor reported finding, “large rounded rock masses…piled up in the paddocks and along the road side…shaped like squat bananas… formed in light coloured rock”. The largest he claimed to be over 3 m high. They were quite unlike the well-known spherical mega-concre­tions of Silverdale that resemble giant marbles, he declared. So what were they?

My partner and I had planned a weekend away from the comput­ers and the Leigh hinterland offered as good an escape as any. With the weather hot and sunny it was a grand occasion to go forth and examine the nature of the editor’s rocks. However, although 37 years chasing students around lower Northland had left me with a reason­able knowledge of its highways and byways, Rodney Road had passed me by. Confirming we had the right location was not straightforward, given that a crucial signpost had been vandalised in the way of to­day’s world.

It was a typical Kiwi metal road, the sort that used to be described as Grade III in my youth, when I walked such stony trails. Some nice homes occupied the first kilometre or two, and we noted some interest­ing, partly grassed road cuttings con­taining large rock masses worthy of later inspection.

We were perplexed when it seemed we may have missed our tar­get rocks, but then we swung round a corner, drove up a slight incline and there they were—like mush­rooms sprouting after summer rain.

Over many years I had learned not to rush to judgement and to refrain from making geological iden­tifications from a car window. We stopped. We got out. We browsed. We mused. We photographed. And then we had lunch.

Some of the rocks were oval, others amy­gdaloidal, one or two crudely cylindrical—the editorial bananas. A few were spherical but most were discoid. Sizes var­ied. The most curious feature was that all were perched on edge in a most unnatural-looking manner.

At the end of the road one shattered example lay inside a gateway. Its interior showed it to consist of very coarse, crudely layered, muddy sandstone containing numerous large pebbles. A second boulder, intact, was perched alongside on its narrow base, sur­rounded by freshly dug earth. Scars on its surface from steel hawsers and chains were clearly visible. Mystery solved. It had recently been erected. We were looking at standing stones, or menhirs; that is, blocks of stone removed from their natural location and erected on another spot.

As we wandered back up the hill we examined others. Clearly, a local landowner, with a lot of time on his or her hands, had been indulging in a little free-stand landscaping. Over a dozen boulders had been heaved upright and each balanced in a rela­tively small hole, in a manner simi­lar to that in which the European megalith builders of 3000 years ago stood their monuments. On one vacant lot for sale, a foreshortened avenue of stones extended either side of the gate.

Finally, on the road out, our eyes now wide open, we noted two recently erected small stones near the front entrance of an up -market property.

The source of the stones is the hills themselves. The parent rock of much of the area, including the main ridge and presumably Mt Tamahun­ga, is 20-million-year-old Waitemata sandstone, laid down in very thick, coarse beds. This rock is relatively impervious to water, but the beds have been broken into large blocky slabs by ancient movements of the earth’s crust. Water percolates down the fractures that separate the blocks and initiates weathering on and along the blocks’ surfaces.

Gradually the blocks’ outer sur­faces alter. Clay minerals form, their presence causing the outer layers of the blocks alternately to shrink and swell as the supply of ground water decreases and increases with sea­sonal rainfall. This slight movement is sufficient for the outer altered skin to crack and expose fresh rock be­neath, allowing the alteration proc­ess to start anew.

As the years go by, more and more altered layers develop about each block, like so many onion skins. The process is known as spheroidal weathering. Where erosion of a slope occurs, blocks may become exposed on the surface. The outer layers now slough off under the influence of sun and rain. The rela­tively unaltered inner rock remains. For obvious reasons these residual masses are known as core stones, and it is just such core stones, in their wide variety of shapes, that have provided an outlet for some­one’s creative urges.

Those wanting to see the vari­ous stages of core-stone production could do worse than visit Buckleton Beach, 20 km south on the northern side of Kawau Bay. At its south-west­ern end, rocks in the intertidal zone and the cliffs consist of fractured, coarse Waitemata sandstone. Wave-cut sections through the blocks show all the stages of spheroidal weathering. Visitors to Rodney Road can inspect large, onion-beskinned blocks of the same coarse sandstone in roadside cuttings, but this isn’t an entirely safe place for recreational viewing. The road is narrow and lo­cal vehicles travel fast.

Auckland history buffs may recall that in the 1840s and ’50s, buildings throughout the region made use of sandstone won from Mahurangi—the same sandstone of which Rodney’s menhirs consist. The chimney and pump house of the Kawau Island copper mine were constructed from this material, as were the window lintels and sills of St Andrew’s Church in Auckland’s Symonds Street.

After a few months’ exposure to the elements, these structures began to degrade. The church’s lintels and sills required patching within a few years, then coating and, in some cases, finally replacing with con­crete. A similar degradation awaits Rodney’s standing stones, but for the moment they provide a grand echo of the past—and leave me in pro­found admiration of those ancestors of mine who built the stone circles of Avebury and Stonehenge. Not only do the sarsen stones of these prehis­toric structures consist of extremely hard quartz sandstone that has with­stood the elements for millennia, but there was nary a JCB or D8 in sight to assist the ancient master builders transporting and manhandling them. Each stone mass was dragged into place and erected by hand—along with much sweat, blood and tears.

The average weight of each Ave-bury sarsen is 40 t. Recently a 100 t monster has been located buried near the main circle. Readers who opt to inspect Rodney’s new menhirs may like to estimate their weight­ while they picnic and contemplate the magnificent views on offer.