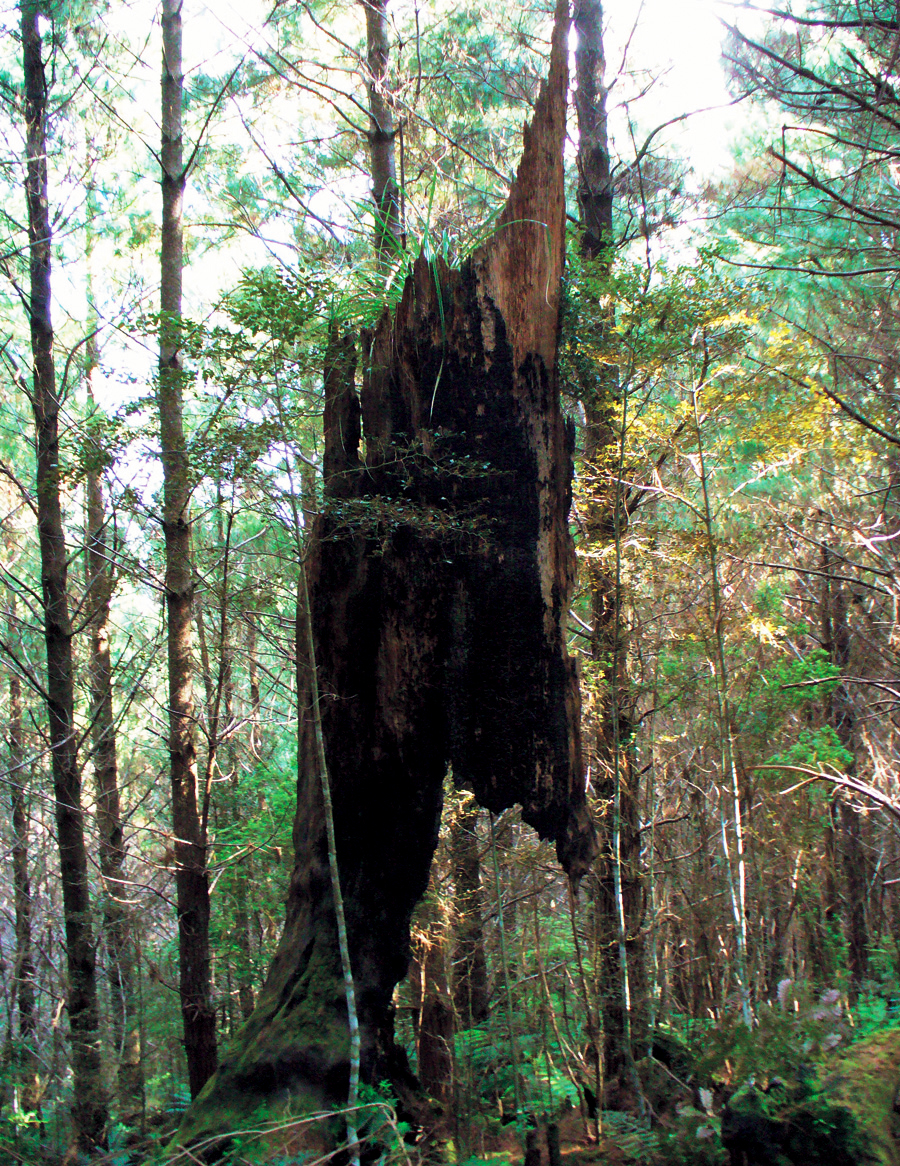 Kairara: one blink and you will miss it. It’s nothing more than a few farms scattered at the base of Tutamoe Mountain, about 20 km north of Dargaville. Not a tourist in sight on the day I passed through—or on any other day for that matter. Kairara is, for want of a better word, obscure. But behind this out-of-the-way settle­ment lies a secret from the past—a secret that I had long wanted to dis­cover for myself.

However, “wanting” and “doing” can be two entirely different matters, and I pondered this fact as I wound my way through the dusty roads to the base of Tutamoe Mountain in late March. Was my quest inspira­tional, or just plain foolishness? The closer I got to my destination, the more it seemed like the latter.

Not that I hadn’t planned things. Before setting out I had enlisted help, the best help. Renowned conserva­tionist, Stephen King, and local kau­matua, Davis Paniora (Te Roroa), had agreed to be my guides for the day. If anybody could track down the secret of Kairara, surely they could. But did I really know what I was looking for?

If the mountain had any answers that day, it wasn’t giving them away. Though bathed in warm sunshine, Tutamoe’s rugged flanks looked dark and forbidding. Only the occasional lone kauri dotted through the pad­docks offered any clues of the pur­pose of our visit.

At the bottom of Tutamoe the grasslands were abruptly replaced by forest. Not kauri, however, as you might expect, but pine. Here, as elsewhere in New Zealand, it is a familiar story: native forest logged or burned, and replaced by the “mira­cle timber tree”, Pinus radiata.

We got out of our vehicles and proceeded on foot. I felt oddly cheerful. Beneath the pines the light was soft. Thick layers of pine nee­dles, which had suppressed most of the undergrowth, made for easy walking. We talked as we trekked upwards, ruminating on the past and its legacy: the kauri bonanza of the 19th century, the logging, the gum-collecting and, most shock­ingly of all, the burnings. In the late 19th century the drive to clear land for new farms reached a crescendo in New Zealand and the match was quicker than the axe. Summer after summer the settlers’ fires raged, and vast stands of kauri (and other valu­able timber trees) simply went up in smoke.

In a few short decades the kauri forests were decimated. No one knows exactly how much kauri was lost, but the forests that survive today are mere fragments of what existed. Mature, large kauri are espe­cially rare; incredibly, they are to be found over only 1 per cent of their pre-human area.

Tutamoe had once been home to large kauri. Even at the end of a dry summer, the slopes were cool and damp. It seemed difficult to believe that indiscriminate fires had raged here, too.

Then, just ahead, we saw the proof: blackened stumps. They were kauri, unmistakably. Massive stumps dotted between the pine trees like ancient gravestones. Sud­denly, the pines seemed like very poor substitutes.

Further on, there was more proof. Rising above us, like apparitions, were the ghostly trunks of large kau­ri. The charred remnants of the trees rose upwards—six, eight, even ten metres, and then stopped. In the dim half-light of the forests they seemed unreal. Frozen in time, their trunks burnt hollow, unchanged for over 100 years except for the mosses that covered them.

Our mood was sombre as we passed by these cremated ruins. I had seen for myself the sad truth: that the slopes of Tutamoe Mountain had once been full of kauri—giant kauri. Yet even as I reflected on their demise, I pondered on their beginnings. I put the question to King: why did kauri grow to such massive proportions on Tutamoe? Was it luck? Was it genetics? Or were there other factors?

According to King there are various theories, of which genetics certainly plays a part. But on Tuta­moe there were probably two main factors. The first is the soil. Tutamoe is composed primarily of soft sedi­mentary soils, which enable kauri to establish deep roots and gain good access to summer moisture. Basalt rocks also abound on the slopes of Tutamoe. Originally from the ancient Waipoua volcano, the rocks are rich in minerals which, over the course of time, add fertility to the soil. Almost all the really large kauri today are found on sites with deep, relatively fertile soils.

The other important factor relates to the kauri’s longevity. Of all the 15 kauri species found in the Pacific, the New Zealand kauri (Agathis australis) is not only the largest, it is by far the longest living. Extreme longevity, however, poses certain challenges. It means that a tree must be able to survive catastrophic natu­ral disturbances such as floods, fires, landslides and extreme winds. Ecolo­gists now know that natural distur­bances have been a major influence in vegetative patterns and processes in New Zealand’s pre-human history. Only kauri that were lucky enough to avoid these natural disasters could reach great size and age.

Good luck for a kauri often meant a good location. And Tutamoe Mountain, as it happens, had good soil and good location for long-liv­ing kauri. For a start, the bulk of the Tutamoe Range provides good protection to its southern side from cyclonic events that periodically bat­ter the northern North Island. Nei­ther was the mountain at risk from flooding. Even more significantly, Tutamoe’s cool, moist slopes would have offered natural protection from fires and drought, the latter being a primary limiting factor for tree size and longevity. Thus, blessed with a favourable location, some kauri were able to grow undisturbed for thou­sands of years.

Thousands of years? Remarkable, but true. Worldwide there are few trees with lifespan measured in thou­sands of years, but the kauri is one of them. Only 20 km north of Tuta­moe stands Tane Mahuta, the largest living tree in New Zealand. Its age is estimated to be at least 2000 years; nearby, Te Matua Ngahere is thought to be about 3000 years old. And there were others that lived even longer…

Proceeding up the south-eastern flanks of Tutamoe Mountain we left the pines and entered regenerating native forest. Here the undergrowth was thick. Suddenly, walking be­came difficult. The forest seemed to close in around us, and although I was relishing the native bush, I felt my spirits beginning to flag. Perhaps the last part of our journey would be too difficult.

There was a clearing ahead of us, a chance to stop and reassess our situation. Maybe cut our losses and head back. I glanced ahead to King. He had stopped on the edge of the clearing and was smiling back at me. I felt momentarily puzzled, but as I drew nearer, King nodded. My pulse quickened. Was this really it? Was this the tree?

I looked upwards, upwards…And there, towering above me was…noth­ing. There was no tree. Only empty sky—and the memory of something that had existed.

But I imagined the tree. I imagined it above me, filling the sky. “Kairaru” they called it: the largest kauri ever officially measured in New Zealand. It was big, so big that when Percy Smith first discovered it in the late 19th century, he mistook the trunk for the side of a cliff. Which is not surprising when you consider how big it actually was. In height and girth it was almost half as big again as the legendary Tane Mahuta. Even more incredibly, its timber volume is esti­mated to have been triple that of our largest living kauri.

But not any more, for Kairaru, like so many of our kauri giants, is but a distant memory. For 4000 years or so, it grew safely on the slopes of Tutamoe. It pre-dated the early civi­lisations—the Persians, the Greeks and the Romans—and outlived them by more than 1000 years. By the time Maori first arrived in Aotearoa, it was a giant. And so it kept grow­ing, slowly, as the centuries rolled by …until one day, in the smoke-filled summer of 1891, it fell victim to a careless fire.

The loss of Kairaru hung heav­ily over me that day. It seemed as senseless and wanton as the sacking of Persepolis. Yet standing in the place where Kairaru was once rooted gave me strength, too. Like past civilisations, a mighty tree can have a great power, even in memory. That strange power, fuelled by the memory of something both ancient and wondrous, is perhaps the great­est legacy of Kairaru.

I had discovered for myself that there is more to a tree than meets the eye. And it was fi tting, I thought, as I paid tribute to our greatest invisible tree, that I should be standing shoulder to shoulder with King and Paniora. They understand the ancient power of the kauri. And their work, for the Waipoua Forest Trust,is all about protecting and restoring the kauri forests for the new millennium. One day, perhaps, there will be a new Kairaru.