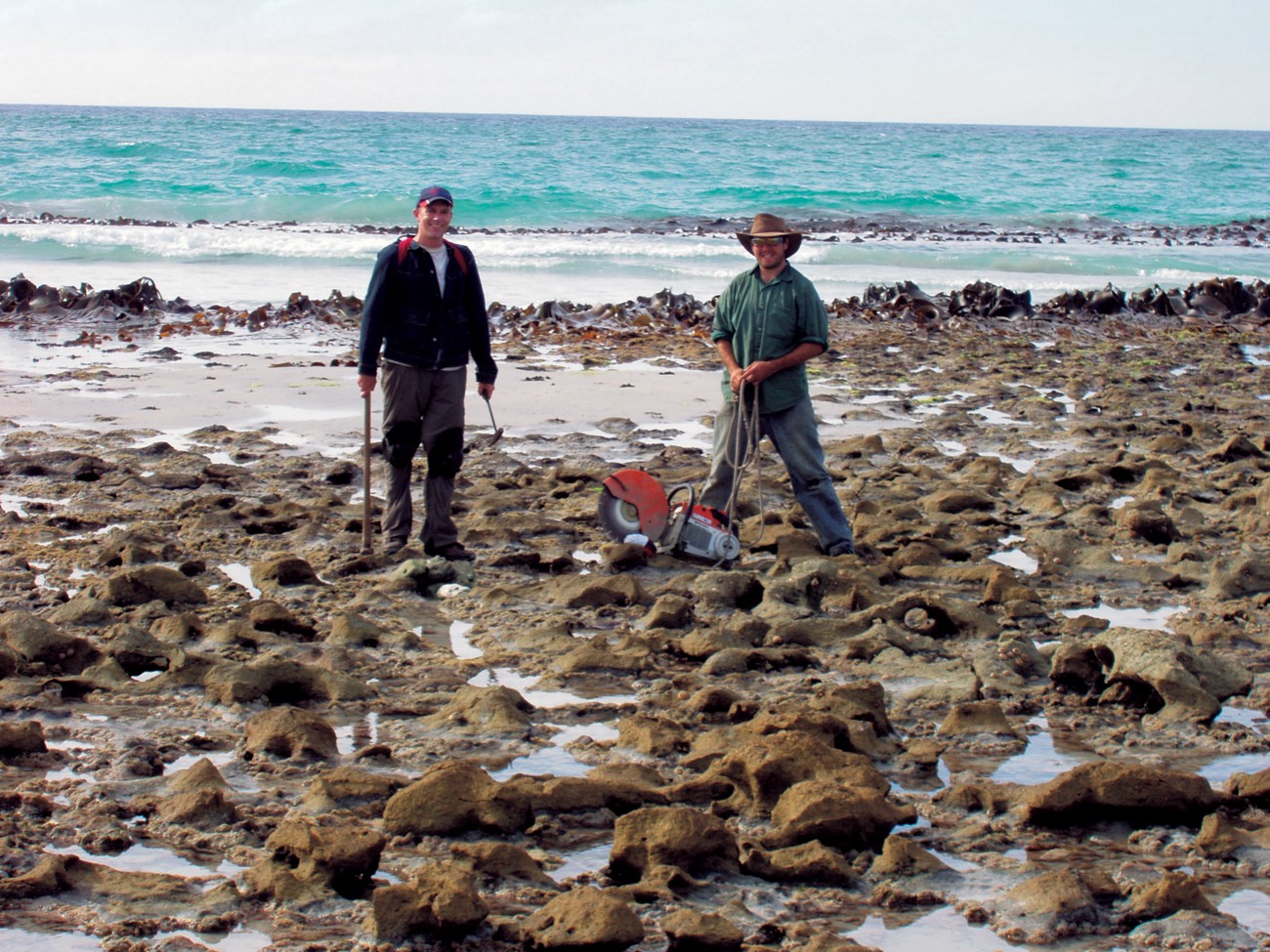 Moriori gave the Chatham Islands the name Rekohu or “misty skies”, a most appropriate name since cold water from Antarctica meets a warm current from the north to produce a lot of mist in the area. But this mix­ing of waters produces more than mist—a great wealth of marine life that the Moriori used as their main food source.

It was observed soon after the first Europeans made contact that birds on the Chathams held no fear of the Moriori, meaning that the people must have drawn on the sea for necessary protein. But unbe­known to both native inhabitants and European arrivals, the Chathams have a rich paleontologic past. Here, the marked imprint of ancient ocean upwelling and the associated diver­sity of fossil organisms is preserved in extensive coastal rock exposures and on wave-cut platforms along the north-west coast of Chatham Island. The recent first discovery of a host of dinosaurs, marine reptiles, many families of sharks, macroin­vertebrates (ammonites, nautiloids, gastropods, sponges) and plant life in a rock formation called the Takatika Grit attests to this rich biologic past. In the July–August 2006 issue of New Zealand Geographic, I alluded to another major discovery from the Chathams—if the discovery of only the third known dinosaur locality in the New Zealand region and the first on the Chathams wasn’t enough of a good start.

On a rather comfortable afternoon in mid-February (the best time for fieldwork here) my team, which con­sisted of PhD students Chris Consoli, Lucas Buchanan and myself, decided to survey a part of the coastline that had not yielded fossils previously, largely because it was covered in sand and few rocks were exposed. In the early afternoon of February 17, we were hopping across tidal pools at low tide and getting down on hands and knees to peer at the rounded, concretionary mounds of hard sand­stone and grit.

After several minutes of finding no ancient biotic treasures of any kind, I decided to try my luck along the eastern sector of Maunganui Beach. Just a few metres from the beach on the rock platform, I saw beautifully preserved, caramel-colored fossils exposed on the surface of the rock. Several specimens were present in one concretion, and I was quickly able to ascertain they belonged to one-and-the-same creature. But what type of critter? Experience from my long-term work in the Antarctic and mainland New Zealand gave me the first inkling of what these fossils represented. But how could they be present on the Chathams and in rocks of such immense age? I waved for Chris and Lucas to come over.

After a few emotive expletives, we had to think of a way to cut out the block before the tide returned in just a few hours. Having a rock saw is a necessity for this type of work, so we quickly got it running and were able to cut out the block holding the fossils in its entirety. At that point we could see fragments of other fossils in the same rock, but could not ascertain just how many were present or how complete they were, as some could still be hidden within. The following days were spent surveying the same horizon and we discovered more and more of the same types of fossils. There was no question…we had uncovered the oldest known fossil aviary in the New Zealand region—a horizon of beautifully preserved bird bones. Because their bones are usually delicate, birds are rarely preserved in the fossil record, so this is a most significant find. In all my years as a paleontologist, I have never seen fossil bird remains dominating a deposit. Few other fossils are present apart from scarce shark teeth, teleost fish vertebrae, possible dinosaur bones (or mighty large birds!) requir­ing fossil prep, and parts of sponges. An intriguing combination.

How many species of birds are represented? One—yes, two—yes, three—probably, four—perhaps. The hardness of the Takatika Grit makes specimen extraction very slow. As far as can be deduced at present, most of the birds comprise post-cranial elements. Many bones are associated and/or semi-articulated, which means that we can tell that they belong to individual birds (see images).

One particular block contain­ing more than 50 bones belong­ing to a creature we affectionately called “Dolores” (with other bones, too) found by me on the last day of fieldwork, has been CAT scanned (see image), and there are many more bones including an articulated limb inside. Many of the bones were scat­tered to some degree after death due to post-mortem processes and later entombed and petrified. Fortunately, these processes, occurring over mil­lions of years, have been kind to the bones, and we are left with many choice diagnostic bones to study.

Thanks to the generosity of a grant of $10,000 from New Zealand Geographic, many of these fossils have now been extracted from the rock, and intense research is provid­ing exciting new information on what ancient life existed on this remote corner of the New Zealand microcon­tinent. So far, we have discovered the oldest, articulated remains of birds, and the presence of further dinosaur bones that were not included in the first paper, including another partial theropod centrum, and two other long bones, identified as a proximal metatarsal and the ulna of relatively large bipedal theropod dinosaurs (probably a basal group).

In the geologic past the Chathams has been dubbed the Chatham Penin­sula because in these ancient times it was a finger-like, emergent tract of low-lying, forested land extend­ing east almost 1000 km from the New Zealand mainland. However, the machinations of plate tectonics meant this peninsula was situated much further south than it is today. Most of it is now submerged along the Chatham Rise.

The greatest challenge for a pale­ontologist like myself is to find out (as far as can be ascertained from detailed study of the rocks and fos­sils) how many different plants and animals lived on this peninsula within greater Zealandia, and their respec­tive ages. This is a tall order for sever­al reasons. Perhaps most importantly, most of the fossil record consists of preserved hard parts of organisms such as bones, shells, teeth, etc.

The soft parts of these species have rotted away and soft-bodied organisms without skeletons that lived in both terrestrial and marine environments are rarely preserved at all. Consequently, we are left with a patchy record of the biota at best, and, in an average shallow marine community, samples of only about 5–10 per cent of the original assem­blage would be preserved for the paleontologist to collect and study. Additionally, calculation of the age of the fossils depends on any available age data on each species recovered and the known geologic ranges of as­sociated species in the same interval of rock. If we are really lucky, further corroboration of the age of both fossils and a particular deposit can be provided by radiometric age dat­ing utilising various isotopes, where appropriate rocks are available. The complexities of geologic processes such as deposition and erosion must also be taken into account.

Considering all of the avail­able data, we estimate that the bird horizon was deposited some 66–64 million years ago, yet most of the theropod dinosaur bones from the Takatika Grit are probably many mil­lions of years older. Given the high species diversity and the latest Creta­ceous age of microfossils in the beds below and earliest Paleogene age of fossils just above the bird horizon, the birds are most likely to be just over 65 million years old, meaning that they lived among the dinosaurs just before the Cretaceous-Tertiary (K-T; also the Cretaceous-Paleogene or K-Pg) mass extinction event.

However, we still cannot discount the possibility that these birds were robust survivors of the K-T annihila­tion, and lived in the early years of the Paleogene during the dawn of the modern world. Irrespective of which side of the boundary they lived, fossil birds similar to these undoubtedly shared coastal habitats with the dino­saurs and other organisms at the end of the Cretaceous Period. This sce­nario will be explored in detail in a final article, along with particulars of what the birds represent. Melbourne artist Jon Hoad will paint a paleoen­vironmental reconstruction of the biota of the Takatika Grit—presented for the first time in NZ Geographic magazine.

The scientific significance of our finds in the Chathams is highlighted by a recent grant from the National Geographic Society Committee for Research and Exploration (my third) to finance a further field season of delving into the old secrets of the Takatika Grit. Not only is a third season of funding rare from NGS, but I received every cent that I requested for the work—almost unheard of in funding for research. This ground­breaking research has, to date, in­creased our knowledge of the ancient Chathams in leaps and bounds—from that initial hunch in 1995 when I ini­tially surveyed the NW coast to major discoveries a decade later of the first fossils of many groups of fauna and flora—a paleontologist’s dream.