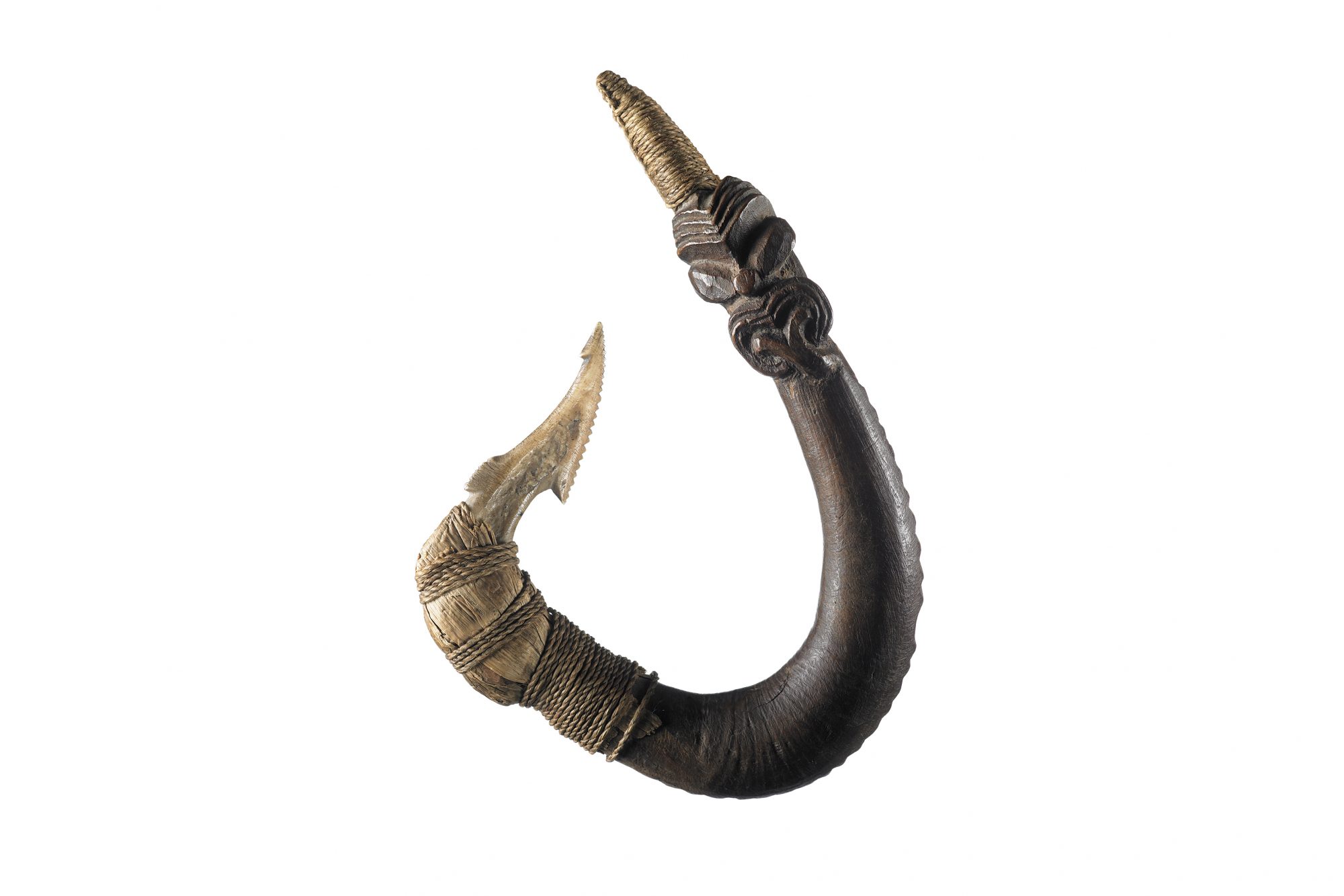 Effective fish hooks were used by Maori to harvest the rich fisheries of New Zealand, but after the introduction of metals by Europeans, they were quickly discarded. The nature of the designs, their function and unrecognised benefits were lost, and subsequently many hooks were incorrectly interpreted as decorative, ceremonial or magico-religious objects. So it’s ironic that internationally, many commercial fishers now regard circle hooks as a recent innovation, even though they were the preferred design used by Maori a millennium ago.

On arrival in New Zealand, between 1100 and 1300 AD, Polynesians had not developed the technology required to refine and smelt metal ores.Instead they used wood, bone, stone and shell to make hooks and other equipment to harvest fish, their main source of food. New Zealand plants such as flax (harakeke), cabbage tree (ti) and astelia (kiekie) provided fibrous material for fishing lines and nets that was equal to or superior to the jute, hemp and sisal in use by Europeans at the time. But unlike metals that can be forged and bent into any desired shape, natural materials impose limitations through the nature of their structure, and compromises were necessary.

Early European explorers, settlers and historians have suggested that Maori hooks, known as matau, were “odd”, “of doubtful efficacy”, “very clumsy affairs” or “impossible looking”. Even recent archaeologists have commented that the traditional hook was “shaped in a manner which makes it very difficult to imagine could ever be effective in catching a fish”.William Anderson, ship’s surgeon on board the Resolution during Cook’s third voyage in 1777, noted that Maori “live chiefly by fishing, making use…of wooden fishhooks pointed with bone, but so oddly made that a stranger is at a loss to know how they can answer such a purpose”.

Two hundred and thirty years later, a study of Maori fishhooks undertaken by the Museum of New Zealand Te Papa Tongarewa showed that the unusual design was related to how the hooks functioned—catching fish by rotating away from the direction of the point and trapping the jaw, rather than penetrating the fish in the manner of a modern metal hook or by acting as a lever as proposed by some archaeologists. In fact, the Maori fishhook represents a masterpiece of design that was unsurpassed anywhere in the world and as efficient at catching fish as any modern steel hook.

Maori were quick to adopt new materials that became available after the arrival of European explorers, sealers and whalers in the late 1700s. They continued to make fishhooks, but used metals and imported fibres. The traditional hooks were thrown away or traded and the wooden and flax components of the discarded ones soon decomposed. Valuable tools made from ivory or greenstone were often retained as decorative items, and today stylised fishhooks are seen as a symbol of Maori cultural revival.

But despite the arrival of new materials, Maori continued to replicate traditional forms in preference to hook shapes introduced by Pakeha well into the late 1800s, and the design of the rotating hook can be traced back, providing continuation and links with traditional culture. Eventually, however, the overwhelming number of mass-produced metal European hooks, and the difficulty of making hooks from nails, horseshoes and other metal objects, diminished the use of the traditional designs.

In the late 19th and early 20th centuries, the increasing demand for Maori artefacts from collectors and tourists led to the manufacture of large numbers of replica hooks for trade by both Maori and European forgers, sometimes directly commissioned by artefact dealers. These fake hooks can often be distinguished by flimsy construction, non-traditional materials, crude lashings, unusual or overly ornate carved ornamentation, and the lack of in-turned points or angled grooves for attaching a line.

In many ways the evolution of matau is emblematic of the way in which Maori adapted European tools, materials and technology to their purposes—European influence and technology added to, rather than replaced, generally compatible Maori techniques, and customary materials were replaced or complemented by metals and, more recently, synthetic materials.

Today, commercial long-liners around the world have adopted a circle hook design almost identical in form and function to the traditional matau in recognition of its advantages and improved catch rates—technology preferred by Maori since their arrival in New Zealand.