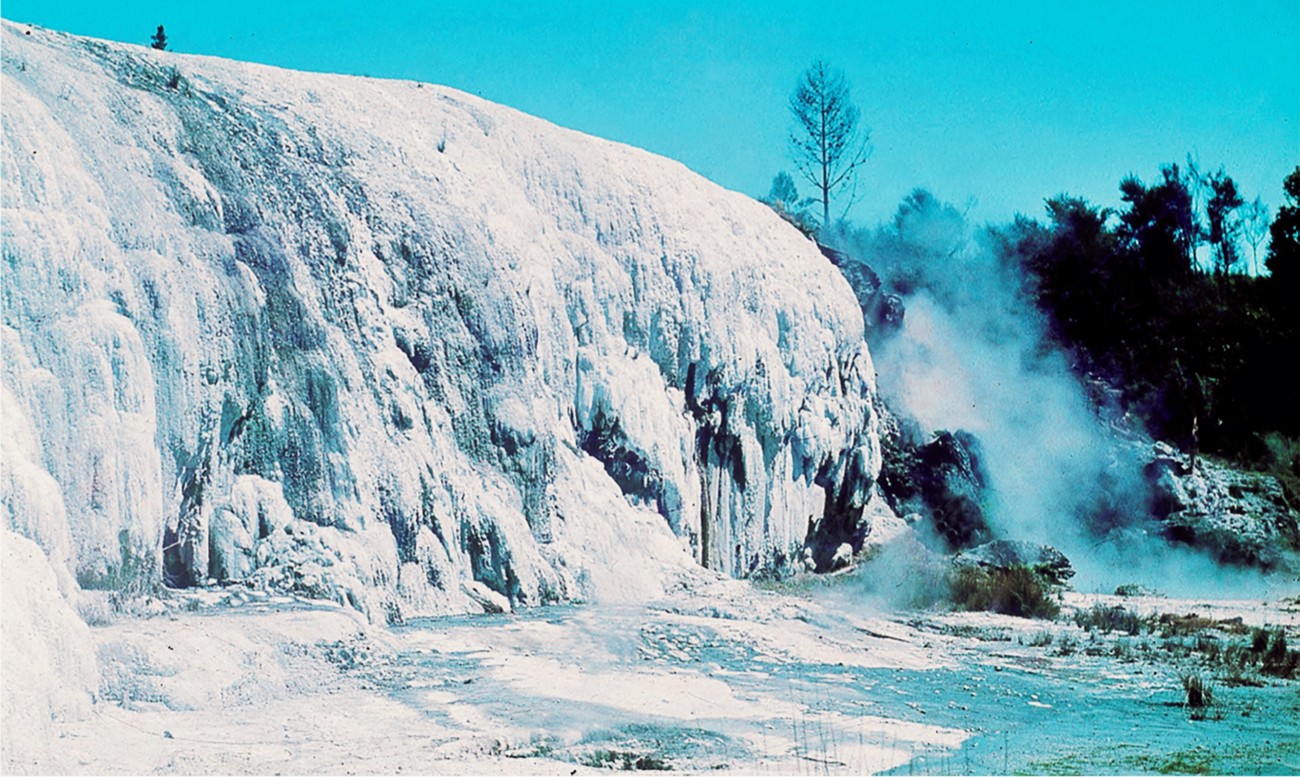 Among the main attractions of New Zealand’s thermal centres are the distinctive deposits of silica known as sinter. These provide as much of a drawcard for tourists as do the effervescent hot springs and gey­sers that give them birth. They are remarkable, persistent, chemical sediments, deposited wherever hot water discharges at the surface.

And the sinters come in an end­less variety of colours and shapes. A hundred and fifty years ago the Pink and White  Terraces with their in­numerable warm water basins were a wonder of the world. Today a slick of delightfully tepid water floods the wide expanse of Waiotapu’s Prim­rose Terrace whose subtle pastel yellows provide a contrast to the bit­tersweet apricots lining Champagne Pool. A virginal white sinter provides a sublime backdrop for Pohutu Geyser at Whakarewarewa. And at Orakei Korako the fabled Golden Fleece is displayed above the slime‑ greens and rust-browns of Emerald and Rainbow Terraces. Irrespective of colour and shape all these encrus­tations are formed of silica.

The admiring tourists may not appreciate is that these deposits are not inert, like so much poured concrete. They are a dynamic envi­ronment. Not only do they continue to grow and evolve as long as their hot spring parents discharge, but from the moment they are deposited they commence to undergo a series of profound changes. Surprisingly, these continue long after the paren­tal springs have ceased to flow.

In Coromandel and Northland, ancient sinters mark the sites of long dead hot springs. These deposits are harder, denser and less porous than those forming today. Some contain cavities lined with quartz crystals never seen among their younger relatives. Clearly changes have occurred after the sinters were deposited.

Further, today’s hot springs contain microbes that thrive in the heated environment. Their bodies provide one of several substrates that the silica encrusts, with their fossil­ized remains giving clear evidence that hot springs were responsible for our ancient sinters.

For a decade or more NASA has been bankrolling extensive studies of sinters. The hot spring environment is extreme when compared with most others on our planet. The life that flourishes in such extreme envi­ronments provides scientists with the best available model of what they might encounter on planets where conditions are literally unearthly. Consequently, microbe-associated sinters give some idea of the sort of evidence scientists need in their quest for ET. However, if hot spring deposits change their character with time then any fossil evidence that microbes were involved may be modified if not erased.

The sinter deposits of northern New Zealand contain pollens, silici­fied plants and even ancient snails that show them to have been de­posited tens of thousands and even millions of years ago. They testify to a long and protracted history of hot water discharge at the surface in this part of the North Island. As such they provide a key to understanding any changes that have occurred. In the past couple of decades Auckland University students have been major players in unravelling what they have discovered is the ever-changing Kiwi sinter story.

The parental waters of our sinters are generated at depths of 5–7 km in the shattered basement rocks that make up New Zealand. At these depths and pressures the water becomes heated well above its sur­face boiling point of 100°C. When it reaches 175°C it can dissolve silica—and other constituents—from the surrounding rock. The product is a nearly neutral solution rich in alka­lis such as sodium and potassium.

Where this solution discharges on the surface a hot spring forms. As it cools, the dissolved silica is deposit­ed. However, the deposition is not a simple process such as occurs when sugar or salt precipitate from a hot saturated solution on cooling and the exact mechanism is not fully under­stood. Nonetheless, the nature of the initial silica is well-documented. It is always a non-crystalline opal or hy­drated silica, commonly referred to as opal-A. It deposits on all available surfaces, in and about hot springs.

In the 19th century at Yellowstone National Park in the USA, bottles, coins and ornaments were placed in hot spring discharges so that they would become coated with opaline silica and provide tourist knick­knacks. In New Zealand silica sinter encrusts manmade structures about pools, lines pipes in geothermal plant, and, of course, envelopes mi­crobes living in the springs—killing them in the process. Both a silicified weta and a partly silicified mouse have been recovered from springs at Orakei Korako.

The opal settles on the surfaces as microscopic spheres that ac­cumulate in clumps and layers. In part, the structure of the deposit is determined by the flow rate of the discharge and the amount of silica being deposited. For example, at Primrose Terrace a slow steady flow over a wide area gives rapid cooling and causes the build-up of numer­ous thin layers. At the Wairakei power station a large volume of spent hot water is flushed through the discharge drain at high speed. Here, innumerable long waving fila­ments of silica coat microbe strands growing from the drain walls.

The first recognition that sinters change with time came from US Ge­ological Survey scientist Dr Donald White, working at Steamboat Springs in the USA in the 1950s. White’s long-time friend, Auckland’s Dr Pat Browne, long believed a similar story was waiting to be told of New Zea­land sinters. In the 1990s one of his students, Rina Herdianita, confirmed this to be the case. She established the essential aspects of the process and, importantly, demonstrated that the changes are widespread and systematic.

Although noncrystalline opal-A is the first-deposited silica, in sinters several thousand years old it has changed to a form known as opal-CT that contains traces of two types of crystalline silica: cristobalite and tridymite.

In sinters older than 50,000 years, Rina Herdianita found all opal had long gone and that these sinters consist solely of fully crystalline quartz and an unusual crystalline silica called moganite that just hap­pens to be very rare elsewhere on our planet.

Work by other research students at Auckland verified Rina Herdiani­ta’s results and New Zealand sinters are now the best-documented in the world. In particular, the researchers showed that along with the changes in mineralogy, the outward appearances of the opaline microspheres that make up the sinters alter, as do the physical and chemical properties of the sinters themselves.

-A forms in moderately hot (60°C) to warm (30–45°C) thermal waters as distinct tiny glassy spheres, less than 0.05 µm in diameter. These coagulate together and grow in number and size to produce the tiny microspherical masses 2–10 µm across that encrust all available sur­faces. (1 µm is 0.000001 m or one millionth of a metre.)

A second generation of micro-spheres can grow atop the first, modifying the appearance of the original sinter and in-filling gaps. Elsewhere, when the rate of silica deposition is greater than the rate of decay, biological matter like branch­es, leaves, wetas and mice that fall into the springs become silicified.

From the moment they form, the opal-A microspheres slowly but steadily change. Apart from some slight increase in size, initial changes are largely internal.

However, some thousands of years down the track, and often well after the hot springs have stopped flowing, tiny thin platelets of silica begin to sprout from the surface of each sphere. These grow in size and number to eventually appear as interlocking packets of plates that coat the roughly spherical masses of silica. It is in these plate-encrusted spheres that small amounts of cristo­balite and tridymite are found. Com­monly the opal-CT microspheres are larger than the original opal-A spheres which they replace. Their odd appearance has led to them be­ing christened lepispheres.

Occasionally the transforma­tion goes a little differently. In one ancient sinter found alongside Hos­sack Road west of Te Kopia (by the Paeroa Range, south of Rotorua) and studied by Greg Holland, the opal-CT spheres resemble balls of yarn, their platelets seemingly woven from loosely-packed threads. Some of these lepispheres have intergrown in a ying-yang arrangement.

the original sinter remains hot after the spring has stopped flowing as, for example, where it is heated by steam, both Rod Martin and Bridget Lynn found the change from opal-A to opal-CT can oc­cur within a few hundred years or less. This is happening presently in several of the steam-heated older sinter masses at Orakei Korako and Te Kopia. On the other hand, opal-A can persist and in a 40,000 year-old sinter just south of Lake Omapere in Northland, Dion Pasters found 99.9 per cent of the mound to still consist of opal-A.

Two types of quartz crystals oc­cur in those ancient sinters that are either in the process of changing or have totally changed to quartz. Typical examples include the 20,000,000 year-old Kuaotunu sin­ters of Coromandel studied by Zowie Newton, and a 100,000 year-old Atiamuri sinter. In places the quartz appears as elegant doubly-terminat­ed interlocking microcrystals 5–20 µm long. Frequently these crystals are arranged in spherical clusters that mimic the original microspheres and their lepisphere successors but have now enlarged to 50 µm in diameter. Elsewhere, clusters of quartz crystals, 30–50 µm long, grow perpendicular to the walls of cavities. Moganite is intergrown with the quartz and is indistinguishable from it except by x-ray analysis. This same association was found by Wendy Hampton in Northland’s ancient Puhipuhi sinters, once mined for mercury, and tinted bright pink-red by the toxic metal.

Although sinters formed by near-neutral alkali-rich waters dominate in New Zealand’s thermal areas, silica also deposits from waters that are highly acid as at Rotokawa, Tiki­tere, Wairakei’s Geyser Valley and Waimangu. Kristen Cook and Clem Teece found that opal-A again forms first but with time it too changes first to opal-CT and then quartz.

Regardless of the nature of the parent water, all these changes in mineralogy and appearance arise when the silica of a sinter becomes mobilised within films of moisture that coat surfaces within a sinter mound. This process alters the sinter mass itself. The density increases, pores become in-filled, and the rela­tively soft spongy original sinter mass is replaced by a hard brittle compact rock.

At Puhipuhi, Wendy Hampton found these changes to be some­thing of a never-ending story. Not only were the quartz crystals in this ancient sinter chemically eroded, but Wendy Hampton found tiny opal-A microspheres perching atop the etched quartz crystal surfaces dem­onstrating that, despite appearances, the rock-hard silica of this sinter is remarkably mobile; it is dissolving and redepositing in the present day through the normal processes of weathering and in the total absence of any hot springs.

As these different processes advance the original texture of the sinter alters. This can occur in vary­ing ways and to varying degrees. Ultimately there is a blurring of any distinction that may once have ex­isted between original textures con­sidered to have resulted from silica deposition about microbes and those with no obvious microbial associa­tions. In effect the sum of all changes in mineralogy and microsphere appearance results in the erasing of the original sinter textures. Until the details of these changes are fully understood, the usefulness of sinters to those seeking extraterrestrial life must remain equivocal.

The situation is not helped through the role played by microbes in the original deposition of silica proving to be more passive than active. The microbes are little more than one of many available sub­strates on which the silica settles. No evidence has been found that they actively seek out silica in the way a snail does calcium. While a snail employs the selected elements to preserve its life, the silica that settles on a microbe kills and entombs it. 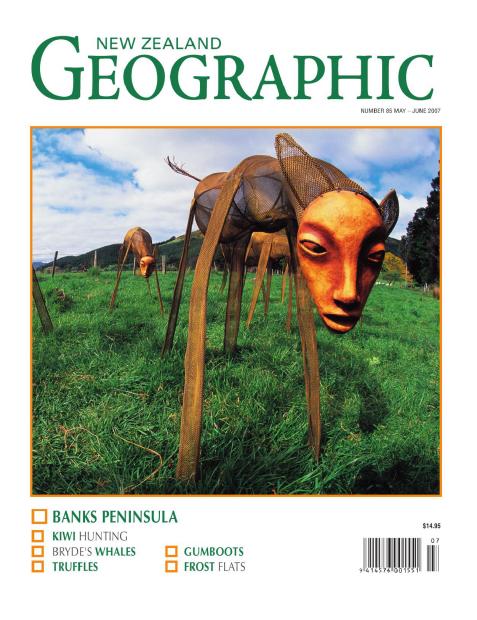