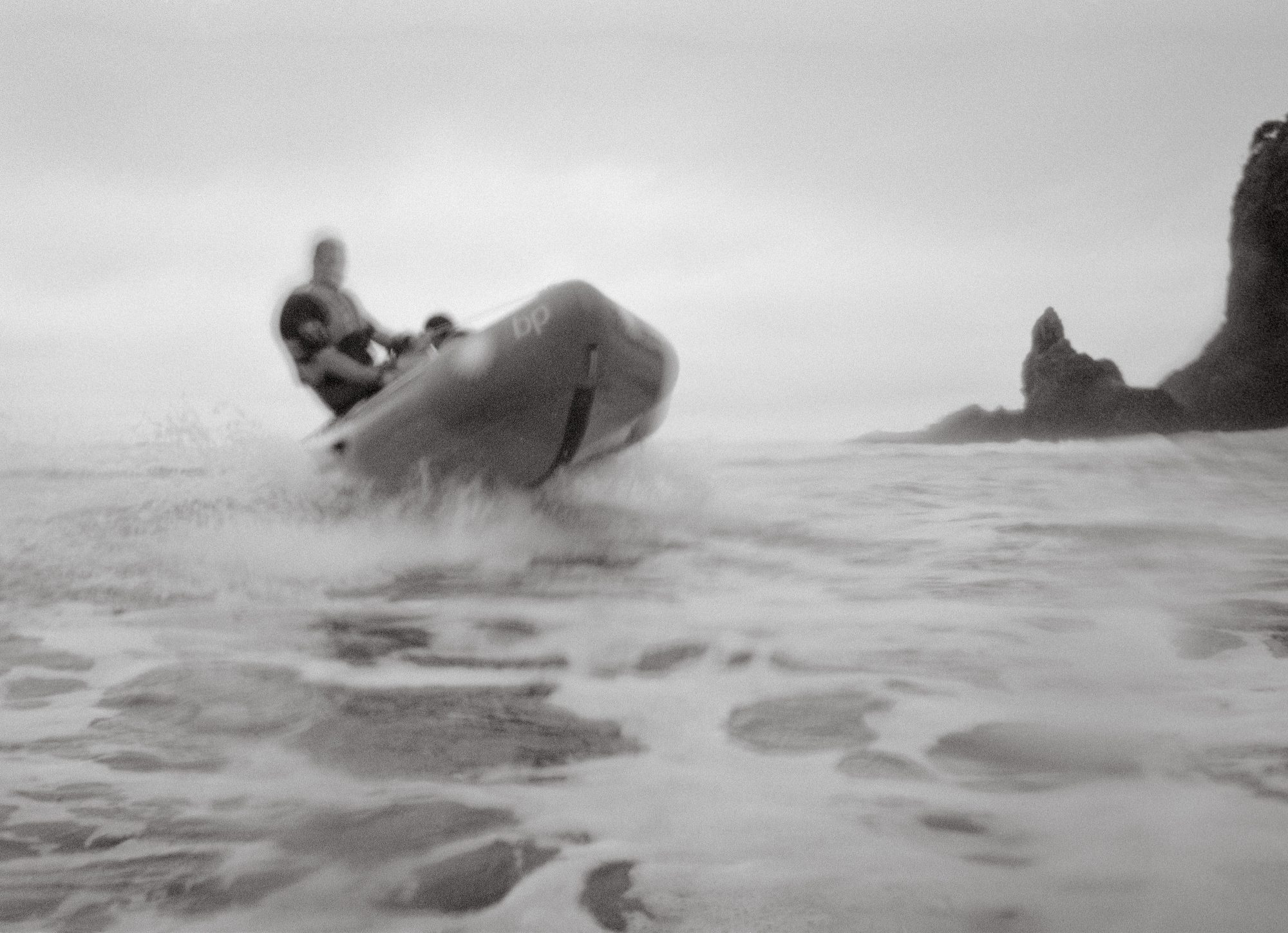 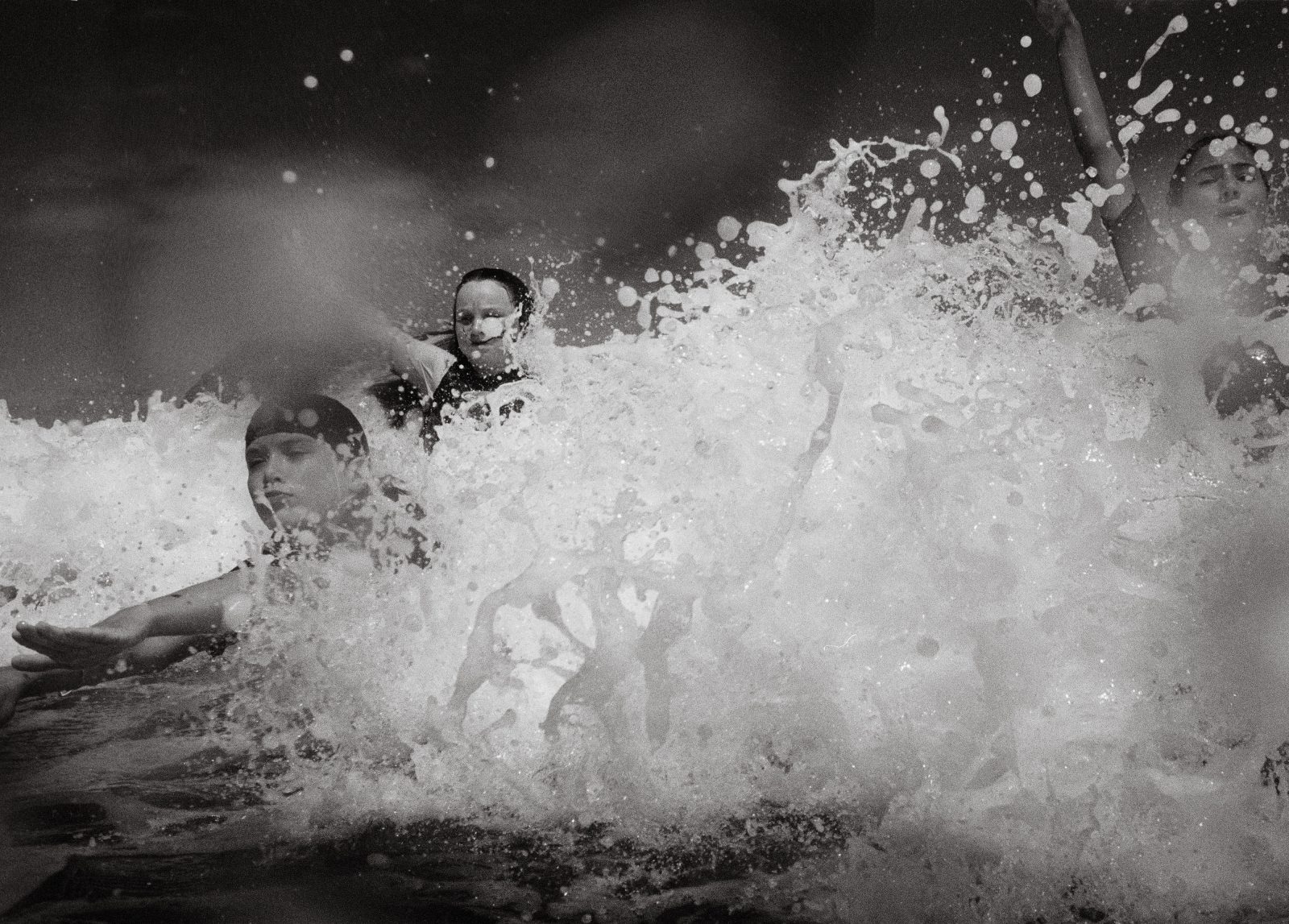 As a child I found the idea of falling off rocks into surf transfixingly awful. It was some­thing to do with the idea of being pulled below by the writhing tangle of bull-kelp octopus tentacles. The idea of being lost forever in a nether world of scuttling things, crevices and foam, from which no cry for help could ever be heard.

Since I spent every weekend of my childhood at Piha, being led on various hair-raising family expeditions that always seemed to involve clinging to cliffs with waves crashing like freight-trains beneath my feet, that fear was hardly surprising.

And then one day I saw a man down in a boiling cauldron of foam and kelp; an elephant seal of a man battling to haul himself back on the rocks. The detail I remember with absolute clarity is that when he emerged his head was streaming with blood. There was a power and a purpose to this figure that pushed past me, intent on urgent business.

He was a life-saver, part of a team trying to save a fisherman. I don’t remember anybody else, just this bulwark of muscle, close-cropped bloodied scalp and noble purpose. And that this man was well aware of the figure he cut.

By a certain spindly awkward age I, too, became keenly aware of the figure I cut. This was not an easy awareness at a place like Piha, among a breed of men lording the beach in their Speedos. I wanted desperately to be part of this colony of bull seals, wanted to join the parade of bronzed, barbecue-fed men swaggering and saving lives.

And so I chose secretly to undergo a shy and surreptitious apprentice blokeship—a course which lasted years. I learned to bodysurf, graduat­ing to work the big waves “out the back,” hanging with the men as a sort of kid-brother beachball bobbing along in nonchalant attendance. I even jumped off rocks into those surf cauldrons and swam round Lion Rock, proving to myself, if nobody else, that I could pass the Piha rites of passage. I came to learn, ahem, what it was like to be rescued.

The first such instance saw me in my novice days towed from a rip by one of the club veterans. The second time, as an out-of-breath adult still proving himself, I was gaffed aboard an inflatable and left to flap and gasp in the bilge by a woman life-saver as she ferried me back to shore.

They were straightforward rescues, but they’ve always embarrassed me. That’s why, talking to current club chairman Peter Brown, I was relieved to learn that even he had been rescued twice.

As we talked about how quickly the coast can catch a man, I learned that the Piha patrol had that day recovered the body of a man lost from the rocks—out of patrol hours—a week before.

“Nobody in that team is very happy right now,” Brown said. “You can see it in their faces. It is never easy getting a body like that into a boat, and one of the guys had to jump in to the water with him. Right now they’ll say it’s OK, but we’ll make sure they all get calls tonight from our counselling service.”

Sitting quietly there with him—watching the beachgoers blithe and unaware as the team disinfected the boat—I pondered a contradiction that conceals the true nature of life-saving out on Auckland’s west coast. Although these beaches see among the strongest rips and biggest waves in the country, the life-saving clubs have achieved such awesome competence that 100 per cent life-saving success has become the public’s expectation.

Club captain Anna Schubert recalled one occasion when they lost three swimmers at the wrong end of the beach: “There I was on the sand trying to give CPR and I had children tugging at my arm, pleading, ‘Please make my daddy come back.’ It was too late. It might look simple—or easy—but every time you go out to rescue people you know the risks.”

Hardest of all is when a swimmer’s response threatens to drown both. The ballet of rescue can be brutal. Brown: “If they grab you in a mad panic and try to climb out of the water using you as a step-ladder—and it happens—things can get very hairy.”

The techniques for dealing with the potentially lethal embrace of a frantic human among the waves are not gentle. If the police have arrest holds, then lifeguards have rescue holds which can be applied with considerable physical force. Sometimes, to break the death grip, a life-saver may have to take a deep breath and force the person under the waves.

Brown: “You catch them by surprise, and you go down with them knowing they’ll be the first to yield, and when they break their grip then you are in a position to get the rescue tube around them.

“I mean, they’re staring death in the face. They’re just freaking. They want only one thing: to get out of that water. There’s these big waves coming at them and they just don’t want to let go of you.”

That nightmare image can be jolted into fresh perspective by recalling school swimming-pool life-saving lessons. The ones where the theory was to get behind the victim, cradle their head and haul them to safety with a lusty one-armed backstroke. The reality was that you both sank like stones in a spluttering, flailing tangle—to no greater cost than chlorine up the nose.

Schubert: “What makes us supermen is three things: surf fins, a rescue tube and training.”

Outside the fraternity, there is little apprecia­tion of the depth of knowledge that has accumu­lated since the 1930s—when the surf reel first arrived at Piha—and that now makes rescues so apparently effortless.

Back then a rescue was all about the beltman strapping into a cork belt and towing 440 yards of Indian cotton line out through the surf—without the aid of flippers. To help the line float it was kept waxed, but it often become waterlogged and tangled round the swimmer’s legs. In the early days the belt lacked a quick-release mechanism. Any kind of entanglement or snag of the line could drag the swimmer under. It wasn’t until 1948 that the Ross Safety Belt—a harness held together by a single pin—was designed by a New Zealander.

Without flippers, and weighed down by the line, it wasn’t always possible to make it out through the waves. In 1935, a young woman, Hazel Bentham, was sucked out beyond the breakers at Karekare and could not get back. A runner was sent over the hill to the Piha club, which threw its new reel on the back of a truck along with four of its best swimmers. But the cotton line became waterlogged, and the beltman could make no progress against the surf. After four hours, the woman was pulled aboard a floatplane which had happened to be at Hobsonville. Less fortunate were three who were lost off Bethels when they couldn’t reach life-rafts dropped from a Bristol Freighter.

Resuscitation in those days was also touch and go. The victim was pummelled, pumped and otherwise contorted in a medically approved manner to force water from the lungs. The Holga Neilson method was never a spectacular success. Mouth-to-mouth arrived only in the 1970s. Now life-savers offer first-response paramedic capability, with defib and oxygen.

In the early days, the entire beach knew when a reel rescue was on. A squad of men roaring down the beach bellowing instructions to each other, paying out rope overhead and working the reel could hardly fail to command attention. Today, three pieces of rubber have changed all of that. About half of all rescues are completed with the help of nothing more than flippers and a rescue tube. Few on a beach are even aware when some­body has been pulled from a rip.

Other milestones during almost 70 years of trial and error include the surfski as a faster alternative to the oared surfboat or beach reel, helicopter rescue and, trialled for a period, a spectacular Holden-powered jetboat that was a sod to launch.

But the surf flipper and neoprene rescue tube count as the most versatile developments, along with Inflatable Rescue Boats, or IRBs, which accomplish half the rescues at Piha—about 200 in an average year.

To help hone teamwork, today’s life-savers continue to drill with the reel and the oared surfboat, a fact attested to by Brown’s “cauliflower toes,” which I saw had literally been worn out by chafing on surfboat footloops.

As we talked, I noted that Brown, although he was not on duty, scanned the surf in reflex. Patrols on the west coast face the particular problem of late-afternoon glare from the sun denying them a clear scan. When an exhausted, inexperienced swimmer can slip beneath the waves in a matter of minutes, a prompt sighting is crucial.

Almost always at Piha there is a rip snaking out through the breakers, stalking the swimmers, its mouth menacingly close to the herd.

Today was no exception. In the glare, Brown spotted a boy on a boogie board being swept round Lion Rock. It was the work of five minutes to pull him to safety. The lifeguard did his best to disguise a wide-open smile of satisfaction. Nobody on the beach had the faintest idea what had just happened.

It’s life, Jim, but not as we know it