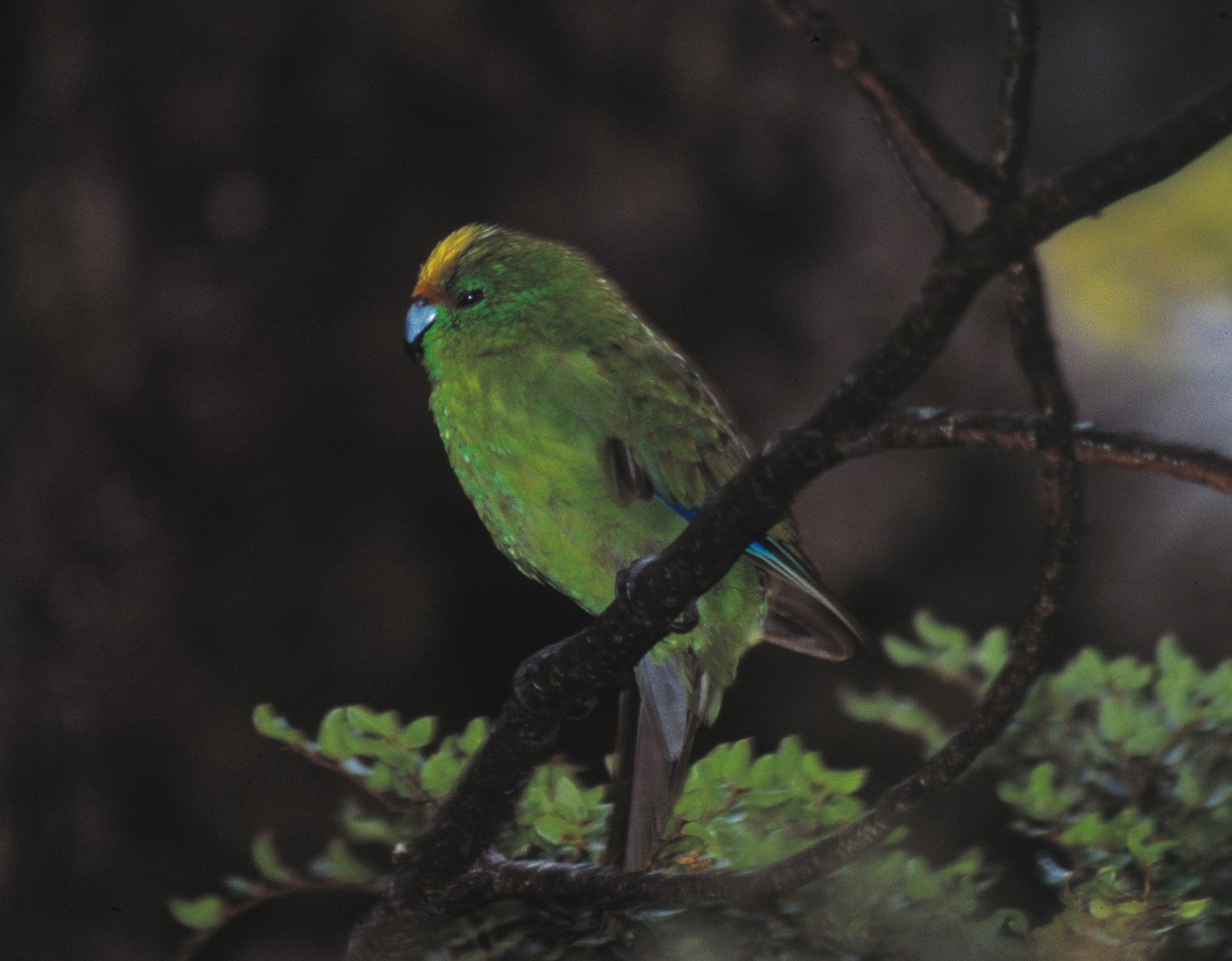 The endangered orange-fronted parakeet could be forgiven for having an identity crisis, since the debate over its taxonomic status has spanned three centuries.

At issue is whether it is a true species or merely a colour variety of another more common parakeet.

Subfossil records show that parakeets were abundant throughout the North and South Islands as far back as 20,000 years ago. Maori knew the three mainland parakeets—red-crowned, yellow-crowned and orange-fronted­—collectively as kakariki.

The first recorded mention of the orange-fronted parakeet was in 1857 by Charles De Souance, who named it Cyanoramphus maihehi from a single specimen, source unknown. The name was later discounted by Finsch, who deemed De Souance’s specimen to be merely a yellow-fronted parakeet, Platycercus auriceps.

Renowned ornithologist Walter Buller added to the confusion by claiming to discover the orange-fronted parakeet in the Southern Alps in 1869, naming it Platycercus alpinus, the alpine parakeet. This claim, too, was dismissed by Finsch in an article which stated: “two specimens, male and female, from the Southern Alps and marked as types of Mr Buller’s supposed species are not distinguish­able from the old known P. auriceps, either in size or colouring. These slight differences are by no means specific and only indicate the younger bird.”

By 1874, Finsch was eating his words:“Platycercus alpinus Buller is not the young of Pl. auriceps as repeatedly maintained by me, but a good species. I received old and young specimens of both through Dr Hector, which convinced me I was wrong.”

Such interchanges were typical of the late 1800s as various authorities laid claim to the discovery of new species or denounced their learned colleagues.

There was, however, general agreement on the bird’s rarity. “This pretty little parakeet I never found near a habitation, only on the mountains near the Alps in low thick scrub; it is a rare bird,” wrote Andreas Reischek in 1885. Phillpotts, in 1919, noted their decline: “They were so tame that a boy with a shanghai could soon make a fair bag; but now it would be difficult to get within gun range.”

Doubts about the species’ taxo­nomic status continued to be expressed throughout the 20th century, with various experts suggesting the orange-fronted was merely a colour variant of the yellow-crowned parakeet. In 1990, it was deleted from the list of New Zealand birds.

Then, in 1995, the discovery of a substantial population of orange-fronted to have the same colour intensity, but the orange-fronted female seems to be a faded version of the male, which Kearvell likens to “having sat in the sun too long.”

“The orange forehead band is the crucial feature when trying to identify them in the wild,” he adds.

Although often heard in the forest, the birds can be hard to spot. The chatter calls of the two parakeet species are very similar, but orange-fronted parakeets have proved to be much quieter than yellow-crowns, making them even harder to find. “It is not unusual to be walking through the bush and to find a pair of orange-fronted parakeet staring at you, at head height, totally silent, just a few metres away,” says Kearvell.

Both parakeet species are highly active, non-territorial birds, restricted to beech forest. They spend most of their time in the canopy, but can be seen regularly on the forest floor, particularly when large quantities of beech seeds have fallen.

As well as feeding on seeds, fruits, buds, leaves and flowers, the orange-fronted parakeet may be the biggest consumer of invertebrates of all New Zealand parakeets. “They can be very tenacious when they have located an insect inside a branch. They will spend considerable time and effort pulling the wood apart so that they can retrieve the nutritious prize,” says Kearvell.

In a beech mast year, a cyclic occurrence of heavy flowering and seeding, orange-fronts switch their diet to mainly beech seeds. They breed prolifically, even through winter, until seed supply runs out. The recent two consecutive beech mast years have meant that parakeets have probably been breeding more or less continuously for 20 months.

In early summer of 2000, the floor of the forest in the Hurunui Valley was sprin­kled with green feathers as numerous parakeets went through a major feather moult at the end of this breeding period. It is now possible that most parakeets will not breed for several years, until the next major beech mast arrives. Instead, they will roam the forests in large mixed flocks of birds, including both parakeet species, fantails (piwakawaka), yellowheads (mohua), brown creepers (pipipi), silver eyes and grey warblers (riroriro).

An ecological study undertaken in the Hurunui during 1998 and 1999 discovered 25 orange-fronted parakeet nests. All but two were in mature red beech, with knot holes the favoured site for nests—some as low as three metres above ground level. Low-level nesting makes noisy nestlings and females incubating eggs particularly vulnerable to predation by stoats, rats and cats, but both sexes can be targets for predators when they roost for the night in holes.

“The orange-fronted parakeet seems to be declining faster than the yellow-crowned parakeet,” says Kearvell. “Yellow-crowns seem able to respond to a beech mast by breeding prolifically, but orange-fronts seem unable to increase their numbers to anything like the same extent.”

The total number of orange-fronted parakeets is estimated at somewhere between 150 and 500 individuals. There are 77 known specimens in muse­ums around the world. Work on the conservation manage­ment of the species has begun. Predator control, in place in the Hurunui since 1995, was begun in the Hawdon in the summer of 1999, and trial transfer to a pest-free offshore island is planned.

It is to be hoped that re-recognition of the orange-fronted parakeet as a separate species, and consequent conservation measures, can tip the balance back to a healthier ratio between live birds and stuffed!