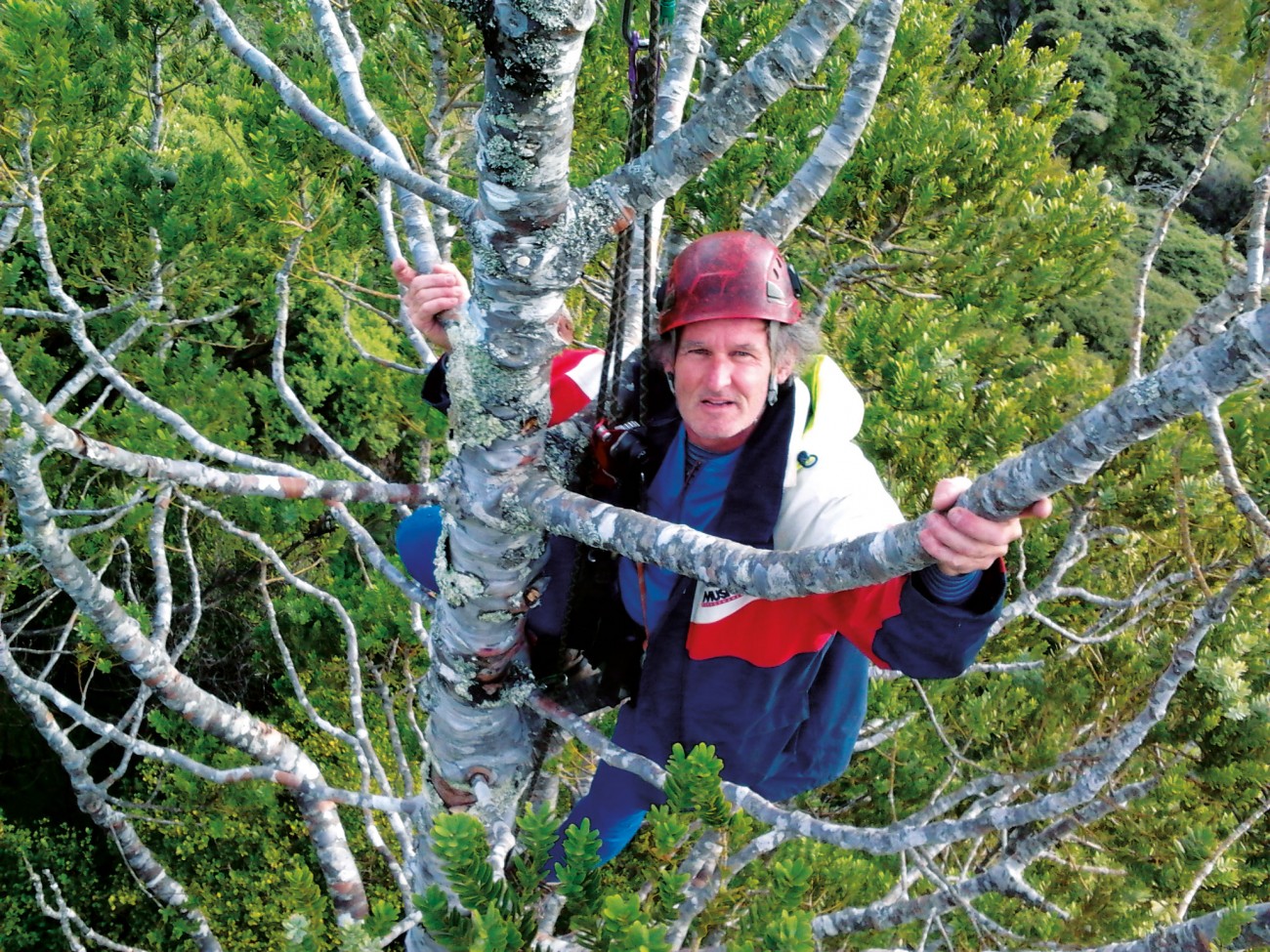 New Zealand Geographic contributors go to great lengths to bring stories of Aotearoa to readers. And for this issue, great heights too.

Three years ago New Zealand Geographic donated climbing equipment to Ark in Park to facilitate canopy research in Auckland’s Waitakere Ranges. For this special issue on forests, writer Kennedy Warne and photographer Arno Gasteiger donned the same gear to scale the forest giants for a unique perspective of arboreal life.

“Although I was a rock climber in a previous life, I was a bit shaky up the first tree,” says Gasteiger. “On the second one I felt at home again and could enjoy the unusual viewpoint. I was amazed at the plant life growing on a large rimu tree—I was literally standing up to my waist in epiphytes.”

Scientists know more about what lives under 25 metres of salt water than they do of the life that exists in the boughs and epiphytes of New Zealand tallest trees. There are few published papers on canopy ecology and the threats to it, and the work done to date raises more questions than researchers can answer. Forests in New Zealand are also extremely varied—podocarp, beech and kauri forests all have their own ecologies and the web of relationships between species in each are very different.

In the production of this feature Warne and Gasteiger visited a range of forests from one end of the country to the other Waipoua, Waitakere Ranges, Pureora, Craigieburn, Hamner Springs, Longwoods, Riccarton Bush, Hinewai, Hump Ridge, Waitutu and the rimu forests of the West Coast. During a shoot on the Hump Ridge track in Southland, Gasteiger was storm-bound in a hut for two nights, ran out of food and had to walk 23 kilo­metres out of the forest on a handful of peanuts.

Experiences of the wet and cold and darkness in New Zealand’s forests may have been one reason why European settlers dreaded the forest. “They resented it with a fierce antipathy,” says Warne. “Its wildness was deeply unsettling, and not what they had been led to expect. But our response as New Zealanders is different now. These forests sustain and replenish us.

“Tuhoe leader John Rangihau once said ‘When I go to the forest I feel I’m getting rid of my old skin and putting on a new one.’ That’s how I’ve come to feel about forests, too.”

In Northland’s Waipoua Forest, the home of the largest trees in New Zealand, Will Ngakuru, a young leader of Te Roroa, explained that the Maori word for forest, ngahere, comes from the word that means to bind together. Says Warne, “It struck me that long before ecologists started saying ‘everything is connected’, Maori understood that all the elements of the forest world were linked one to the other.”