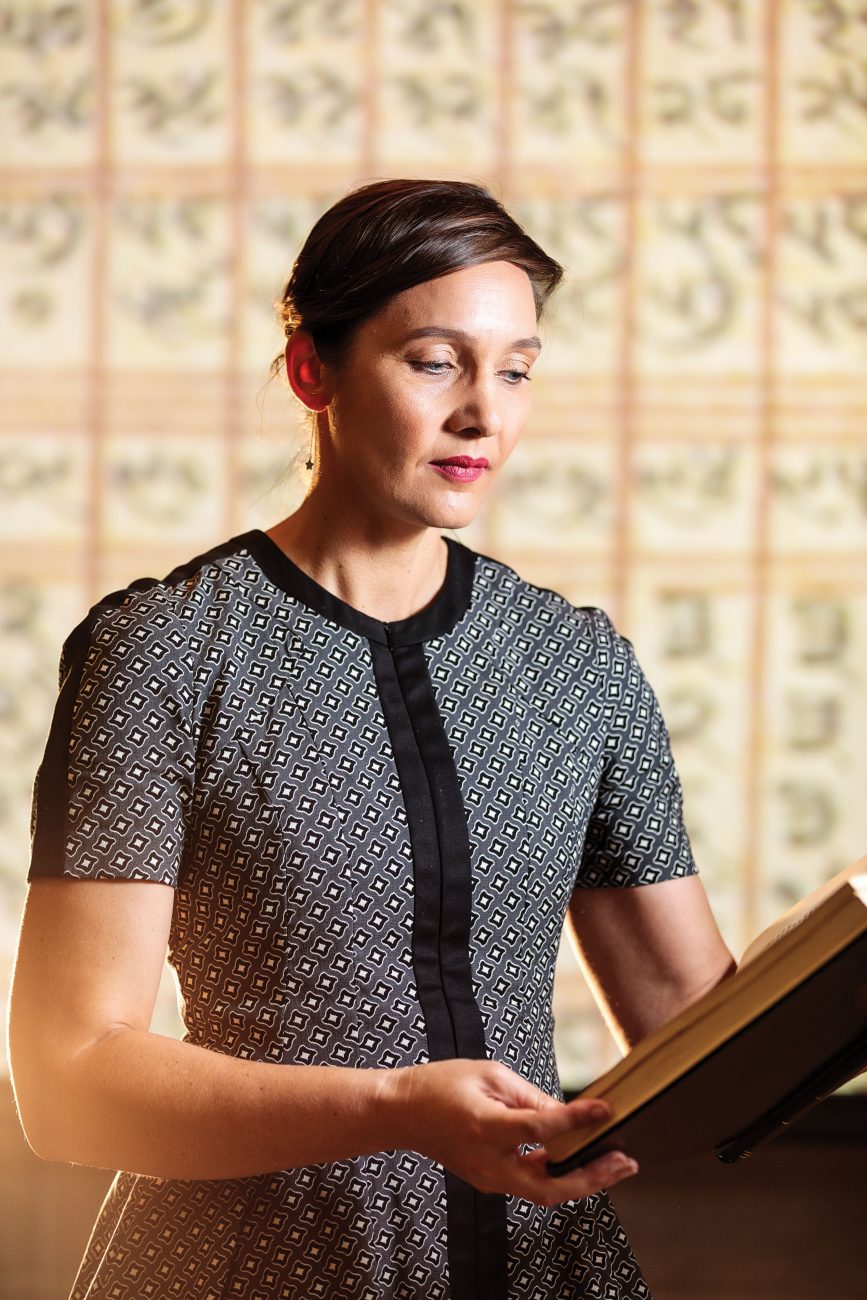 In a library of palm-leaf manuscripts, everything smells like camphor. Each page must be regularly oiled to keep it soft and moist; if it dries, it turns to dust, like tree bark that disintegrates when it becomes brittle.

For Clemency Montelle, the sight of a library full of these thousand-year-old manuscripts, rows and rows of shelves retreating backwards, hasn’t yet been dulled by familiarity.

“The librarian opens the room, and it’s kind of like a movie,” she says. “I go into this scholarly rapture.”

Palm-leaf libraries are located in South Asia, especially in India, and hold Sanskrit manuscripts up to 2500 years old, covering mathematics, astronomy, grammar, and other sciences. There are as many as 30 million surviving historical texts, and Montelle is helping to bring them into the light.

Sanskrit is Montelle’s fourth language. As an undergraduate at the University of Canterbury, she simply chose the subjects she was most interested in: Latin, Greek, and maths.

Few saw the connection between the subjects, but to Montelle it was clear: there’s a mathematical appeal to inflected languages. In Latin and Greek, the purpose of a word depends not on its position in a sentence, as in English, but on which of a range of optional endings has been added—its inflection. When reading, your eye scans the full sentence, searching for the verb, the same way you would read an equation: taking in the whole thing at once, snatching an overview, then examining the constituent parts.

During her studies, Montelle found a connection between mathematics and language that she could build a career on. She came across a copy of Euclid’s Elements in the original Greek, and realised she could read it. Not only that, but it could only be translated by a person who understood mathematics as well as Greek. In fact, she realised, there’s an abundance of texts that have never been translated into English, especially in libraries outside the West. Montelle had found her mission.

She won a Fulbright, gained a PhD at an Ivy League institution, and taught herself Cuneiform, Arabic, and Sanskrit—the last one captivating her.

“Not only is the script absolutely, exquisitely beautiful, and quite enticing in its form, but what drew me to it, which I didn’t understand until quite later, was Indian intellectual culture.”

Sanskrit is a more complex language than the others. A larger vocabulary, more cases, voices, persons, tenses—it’s the ultimate mathematical language.

“You start off with these very careful building blocks and see how you can put them together to achieve more levels of complexity, in the same way that mathematics starts with what is a point, and what is a line, and how these are put together to make triangles and circles, and in turn make more complex relations, such as Pythagoras’ theorem.”

Sanskrit texts also pose an extra challenge to the translator. Science was largely an oral tradition, so mathematical texts were composed in poetry, in order to make them memorable.

“The idea is you chuck out all the verbiage and you absolutely reduce it down to the essential concepts. If you were composing Pythagoras’ theorem in a verse, you’ve got a certain number of syllables. Maybe you’d run out of syllables to say the word hypotenuse, so you’d just leave it out.

“In that way it’s this wonderful puzzle. As the mathematics gets more complicated, it becomes harder to reconstitute the original meaning because it has been so condensed.”

Lately, Montelle has dipped into astronomy, translating a text called the Candrarki—‘sun and moon’ in Sanskrit. At 30 verses in length, it’s on the short side, and it comes with a series of numerical tables, which would have been used as a how-to for calculating the calendar, and identifying when important religious and astrological events would take place.

Montelle co-founded a group, History of Astronomical and Mathematical Sciences in India, to focus on making these texts accessible to the wider world and integrating them into history.

“The mainstream history of science is obsessed with the ‘Greek miracle’. The narrative goes: maths and philosophy began in Greece and flourished in the Classical Age and then there are the Dark Ages where nothing happens in the world, and then, bang—the scientific revolution.”

South Asian traditions, on the other hand, have been completely overlooked.

Making these texts available and accessible, allowing readers to leap into the mind of a scholar writing in 12th-century India, is the first step, says Montelle; not only filling in the blanks of scientific history, but of the culture that bequeathed the world mathematics in meter and verse.