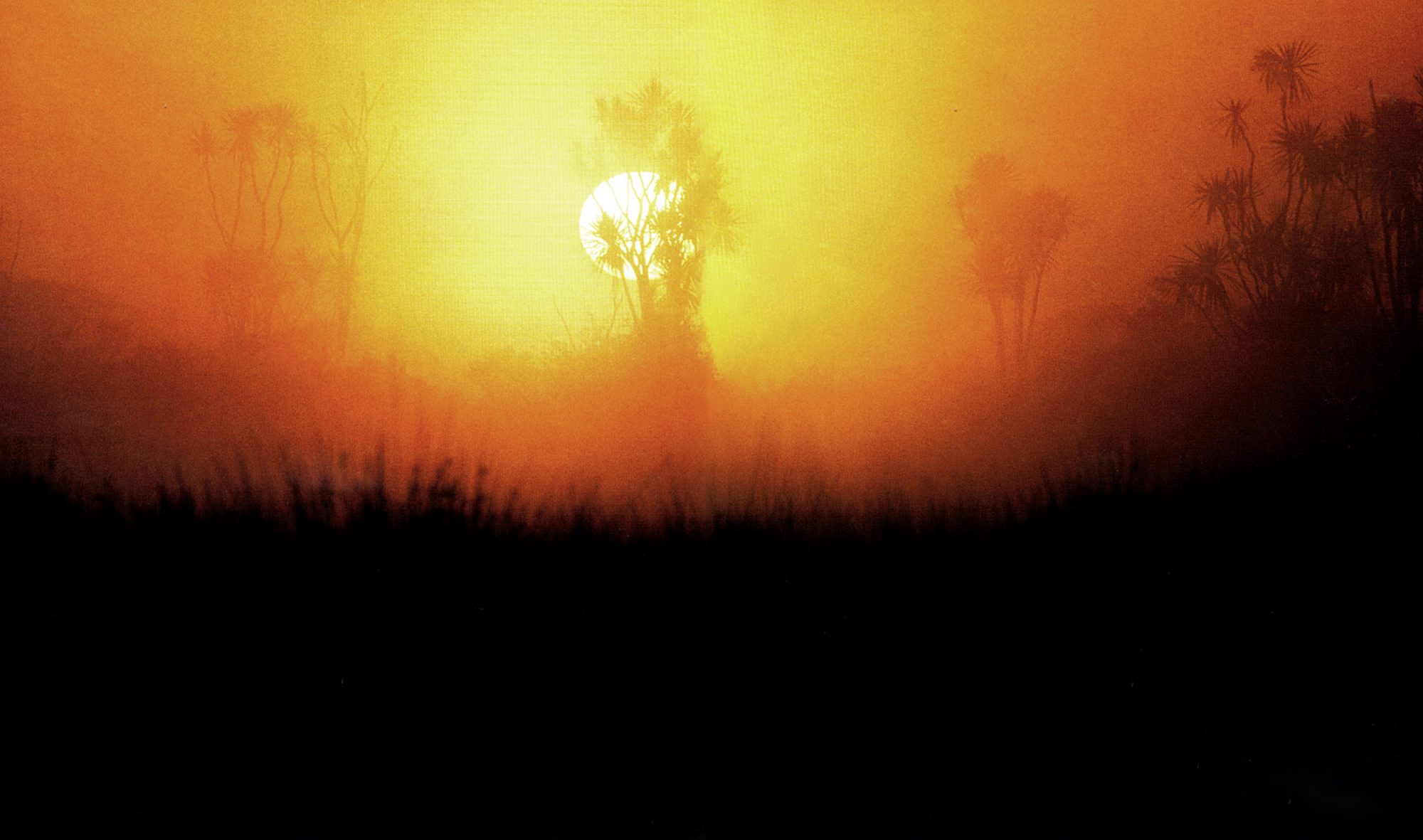 Written by Will Cooper

The first glimmerings of dawn brush a soft rose across the clouds. Rushes stand like knotted horsewhips against the misty ghost of morning. On hidden ponds waterfowl raise a raucous reveille in anticipation of the new day. Dew-drenched grassheads soak my clothes as I sidle through the half-light.

A hawk, disturbed from his ground roost, takes flight with urgent flapping. Spiralling upwards through the fog, the bird is suddenly transfigured by a beam of light.

High-stepping now through clinging undergrowth, I reach a low-lying grassy pocket which the night has turned into a fairyland of frost. Webs encrusted with ice spread in a dozen lacy forms, encircled by bouquets of rime-edged leaves.

With numbing fingers I set up my camera gear. Low light requires a long exposure, but before it is finished the fragile web on which I’m focused crumbles to the ground, rent by the first breath of dawn breeze.

Such beauty, gone in an instant. A lesson in life about becoming too rigid, or carrying too much weight?

The breeze plays out its capricious dance. Always the question for me is: will it freshen, or will it die away? This morning proves an exception, for as the dawn colour fades and light builds in the sky, the wind falls, and I continue through this wonderland of dainty delights.

Insects which have climbed to the top of the undergrowth catch the first rays of warmth and begin their daily rituals: drinking dewdrops collected from their bodies, then callisthenics and stuttering warm-up flights.

Soon, with a percussive burst here and there, the insect orchestra strikes up. The day has begun.

This is no primeval forest or virgin estuary, esteemed by nature lovers. These are the forgotten acres.

They were forest—once. A century or two ago, kahikatea, matai, pukatea, swamp maire and dozens of other species covered tens of thousands of hectares of floodplain in the broad valley of the Wairua River and its many tributaries west of Hikurangi. Yet flat silty land was scarce in the north, and farmers soon started to drain and burn around the edges—a process that has continued almost to the present day.

The area I visit, although a reserve, is frequently grazed by cattle. From a distance, spindly five-metre-high tea tree—some branches draped with lichen—gives the appearance of scrubby bush. But up close there are only a few straggly, sticky shrubs between the tree trunks, and underfoot is a pot pourri of mud, grass, lotus, ragwort, wandering jew, blackberry, rushes and gorse—nothing of apparent value. A few large shallow pools harbour aquatic birds, but the pools dry up in summer. Two or three deeper, darker, oxbow lakes are more permanent.

Fifteen years ago, local acclimatisation society members argued for the preservation of the area, because it was one of the few places where ducks remained abundant, and in 1983 150 hectares was set aside as a wildlife management reserve. More recently—almost too late—the botanical virtues of the area have been appreciated. Pathetic though it is, this scrubby patch is now recognised as one of the last remnants of floodplain forest in the north.

Among the botanic ruins are at least a couple of uncommon relics. The heart-shaped kohuhu (Pittosporum obcordatum) and a similar shrub, Teucridium parvifolium, belong to a large group of plants with a growth form described as divaricating—rich in sticks, light on leaves. Some 900 individuals of the rare Pittosporum—almost half of the country’s stock—are found in this one reserve, and the Yates horticultural company has provided money to study the population.

Yet there is more here than unusual plants. Amidst the rank grass of the ungrazed portions—six hectares were spared in 1994, and a different 30 hectares have been set aside this year—insects and spiders abound. After hard grazing or a flood, insect numbers take a year to recover, but they then become many times more abundant than on normal pasture. Dozens of species and hordes of individuals swarm across the fields, objects of interest not only for me but for many sharp-eyed birds.

Hawks, despite their image as road-kill carrion feeders, seem especially partial to insects such as grasshoppers and kaytdids. Up to half a dozen have made the area their nightly roost. Fern birds spend several hours in the morning foraging over a room-sized area before moving out. Pheasant, pipit, pukeko, skylark and plover are also prominent at the feasting.

These forgotten acres may be held in scant regard by both farmer and naturalist, but they remain a refuge for the unobtrusive; a place where, with patience, the camera can capture the daily dramas of life in a small and fragile world.

More by Will Cooper

Hour of the Swarm