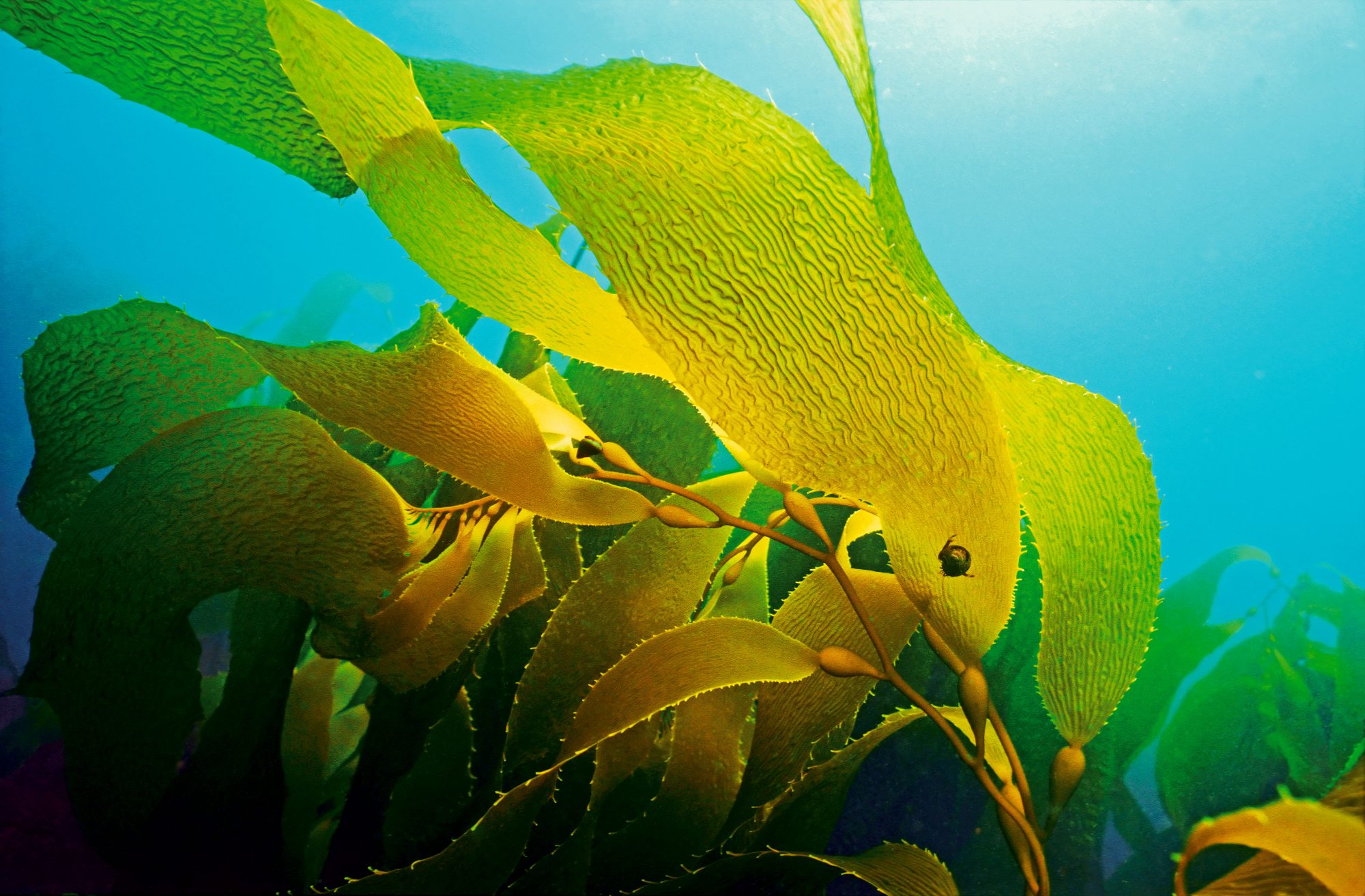 From the reef tops, the giant kelp reached up to the sunlit surface, 28 m above. Near its edges, this snaking forest tapered off to a gently undulating canopy a few metres below the surface.

Something darted in the shadows: a group of New Zealand sea lions, weaving in and out of the kelp, chasing each other, playing, gliding over to check me out and then heading back to the others or up to the surface. They moved in a graceful underwater ballet, sometimes sinuous dancers in freeform choreography, sometimes silver torpedoes.

In the cold and clear subantarctic water I couldn’t quite see the surface from the seafloor. I ascended slowly through this silent underwater forest. The overall blueness faded and other colours slowly returned as I neared the surface. Large spider crabs, hermit crabs and small snails hung onto their kelp home, scavenging and grazing. A 3 m long jellyfish hung almost motionless in the still water, its long tentacles disturbed briefly by my passing. Just metres from the surface I marvelled at one of the most beautiful sights underwater—the golden growing tips of giant kelp, lifting up and down in the gentle surge, dancing in the almost-imperceptible current.

Around the world, most giant kelp forests are in water less than 30 m deep, though in very clear water some have been found as deep as 65 m. A hundred or so species of kelp are distributed worldwide, growing on rocky reefs in waters between 5-22°C. Even Alaska has rich kelp forests growing in its cold waters.

The “trunk” of a giant kelp is not solid like a tree trunk, but a tough and flexible group of stems, each like a long upward-reaching piece of thin rope. This flexibility allows the plants to move with currents and waves. Though structurally quite different, the kelp blades act like the leaves of land plants, photosynthetically converting the sun’s energy and carbon dioxide from seawater into food. This is then transported down through the stem to other parts of the plant.

By late summer, the canopy of  a giant kelp forest is often widespread and thick, letting little sunlight through into the shaded waters below. In the depths, light levels do not support kelp and, moving away from land, the forest thins and eventually disappears, giving way to sponges, hydroid trees, gorgonian fans and black corals.

Each year millions of tonnes of seaweed are harvested from the sea around the world: some farmed, some washed ashore after storms, some picked from the rocks.

Almost all seaweeds are edible and are rich in protein, minerals, and vitamins. The Chinese have been eating seaweeds for at least 2,500 years and were using them as medicines as early as 3000 B.C. Of the 500 or so species we eat, 150 are commercially important. Nori, a seaweed very similar to our own karengo, is used to wrap sushi and is a mainstay of Japanese cuisine.

But seaweed’s usefulness does not end with food. Its extracts find their way into toothpaste, clothing, ice cream, even in the ink and paper of books and magazines. It is added to instant puddings, chocolate milk, cereals, bread, pickles, beer, custard powder, salad dressings, pie fillings, make-up, detergents, shampoos, paints and medicines.

This versatility is due to phycocolloids—large complex molecules found in the cell walls of many species. The three main ones are alginates from brown seaweeds, agar, and carrageenan, extracted from red seaweeds.

Phycocolloids keep breads soft and stop them from drying out, make dried noodles stronger and liquid foods smoother and thicker. They gel, stabilise, bind and prevent liquids from separating. Alginates stop ice crystals forming in ice cream, slow its melting, and make it smooth and creamy. Agar is indispensable in medical and other scientific research, and DNA fingerprinting uses seaweed extracts. Weed is a term reserved for unwanted plants—seaweed is anything but.

I have dived in countless kelp forests, including at each of New Zealand’s subantarctic islands. I would take them any time over coral reefs—how better to appreciate the amazing variety of life, than in the continual, hypnotic motion of swaying seaweeds?

The DNA of climate change

At any given moment, about 70 million bull-kelp rafts are floating in the Southern Ocean. But this is no leisurely journey, as strong currents encircling the Antarctic sweep the rafts thousands of kilometres in a few short months before delivering them to distant shores.

If a raft makes landfall, perhaps on a continental coastline, or even on a rocky outcrop in the middle of the Antarctic’s icy ocean, the bull kelp attempts to establish a new colony. It is a process that has been going on for millennia, one that provides some surprising insights into past and future climate change.

Southern bull kelp has become the consuming passion of Ceridwen Fraser, a PhD student at the University of Otago, who has been studying the distribution and genetic make-up of Durvillaea antarctica for the past three years. Fighting surging seas to collect bull kelp from the coastlines of far-flung subantarctic islands is all grist to the mill for the 30-year-old scientist. Last year, she was in the Falkland Islands. In 2007, she was on Gough Island in the southern Atlantic Ocean. Before that Marion Island in the Indian Ocean, the Campbell and Auckland Islands south of New Zealand…

“It’s fine doing that in New Zealand, because you can choose a calm day,” she says. “But when you only have a three-week window each year and you’re on an island facing four- to seven-metre swells and you’re down to the last few days, you start to panic a bit because that’s a lot of time and money to throw away and not get any samples.”

In all, she has collected bull kelp from more than 50 sites on subantarctic islands, New Zealand and Chile.

And the findings are surprising. By looking at the genetic patterns in bull kelp globally, Fraser and her colleagues have determined that the subantarctic region was re-colonised by southern bull kelp comparatively recently.

“The lack of genetic variation in sub-Antarctic bull kelp indicates that this colonisation almost certainly occurred since the peak of the last Ice Age, which was around 20,000 years ago,” she says.

Southern bull kelp can survive low temperatures but it cannot withstand ice scour and is dislodged when sea ice rubs against the rocks to which it clings. The implication is that sea ice wiped kelp out from islands right around the subantarctic belt, islands that were thought to be ice-free during the last Ice Age.

According to Fraser, who published her research in Proceedings of the National Academy of Sciences, sea ice reached further north during the last Ice Age than scientists have thought, drawing a new northern limit that lies between Macquarie and Campbell Islands. On the other side of the continent (below South Africa) the new line should take in Marion Island, which lies on the same latitude as Dunedin.

If the sea ice reached that far north, it implies that the ocean became colder than had been believed, and that the change from then to now has been more dramatic. This in turn suggests future climate change models are too conservative—if it has happened before then it can happen again. Perhaps the speed and extent of climate change are going to be greater than we have anticipated.

The use of modern DNA to assess historic climate conditions is an important new approach to reconstructing the past. Until now, this work has been largely the domain of chemists and geologists, dating sediment samples from the sea floor and measuring, among other things, their ratio of light and heavy oxygen atoms, or their quantity of microscopic fossilised algae, as pointers to the climate of that period.

Yet GNS palaeoclimate scientist Giuseppe Cortese has some reservations about the implications. “There are a number of assumptions underpinning what is being said,” the Wellington-based scientist says. Is the genetic similarity of the bull kelp undisputed? Did it re-colonise the region during the stated period? Was it sea ice that removed earlier kelp? But if the findings are borne out, then “of course, this is a new piece of evidence in understanding the extent of sea ice” and an important component in helping shape the understanding of climate change.

Unequivocal endorsement, however, comes from study supervisor Associate Professor Jon Waters: “It is essential that this kind of historical information gets incorporated into global climate models,” he says.

Gardens under the sea