Sometime around 540 million years ago, something extraordinary happened. Where before had slouched a listless, soft-bodied, mostly senseless fauna—quasi-jellyfish, sponges, the odd worm—there erupted into existence a sophisticated, novel bestiary the like of which had never been, nor likely will ever be again. Palaeontologists call this mushroom cloud of innovation the Cambrian Explosion. Of course, evolution simply isn’t that quick on its feet, but an awful lot of trans­mogrification went on in a comparatively short burst, just the same.

Within just 30 million years, most of the phyla we would today only dimly recog­nise as animals had appeared. And they hit the fossil-bearing ground running: what followed was radiation and adaptation so vigorous that, 80 million years later, most modern animal lineages had materialised. Much of what we know from this period was writ small in the fine dark mudstone of the Burgess Shales of British Columbia, thrust into the light by the exertions of the Rocky Mountains, and painstakingly revealed through the curiosity of palaeontologists such as Charles Walcott and Simon Conway Morris.

The Burgess Shales—known geologically as a Lagerstätte, German for ‘storage place’— are the luckiest break yet in the investigation into our distant past. Whatever undersea landslide overwhelmed them, it miraculously preserved the creatures’ cuticles, thin films and soft tissues (but sadly, not muscles) so well that they survived 500 million years of burial. To date they have given up 172 ances­tral species: molluscs; arthropods; coelen­terates; echinoderms; annelids; sea pens; onychophorans and—momentously—our own forebears, the chordates.

It was during this biggest of zoological bangs that creatures settled on the funda­mental physical body plan: bilateral symmetry. Then Nature began to redden in tooth and claw: with recourse now to robust exoskeletons, organisms evolved legs, flapping tails and grasping pincers.

Active predation was invented, firing the starter’s pistol for an arms race still running. A multitude of ingenious mouthparts appeared to process the catch. To avoid that fate, others developed sensitive antennae, the first ‘complex’ eyes, and colour vision.

By the end of the Cambrian, around 480 million years ago, the first animals were crawling up the primal beaches—a rate of evolution that even had Darwin doubting it were possible.

But what detonated the explosion? Most of what we know about pre-Cambrian life is etched into the Ediacaran rocks—between 635 and 541 million years old—in Australia, Canada and the English Midlands, and those facile fossil ancestors bear little resemblance to the sophisticates that followed. The Burgess Shales, at 505 million years old, show us where the Cambrian ended up, but don’t demonstrate how or why it happened: there’s a huge gap in the middle. Or at least there was.

In 1998, Chinese-led teams discovered a Lagerstätte storage place in a seam called the Doushantuo in southern China. It’s been dated at 580 million years old, and the teams will be looking not just at the creatures it contains, but also its trace chemical clues.

In particular, they’ll be analysing levels of a light carbon isotope, C12 , which can indicate how much oxygen was around at the time. We know that during the Ediacaran period, C12 levels flared at least three times. Each time, the complexity and diversity of contemporary fossils surged too. The final, most dramatic oxygen hike immediately followed the final Precambrian glacial period about 560 million years ago, and lasted nine million years. C12 in rocks from around the world have confirmed this was a global escalation. Explosions—pyrogenic or evolutionary—can’t happen without oxygen.and researchers think this global glut fuelled the rise of complex animals.

Which brings us seamlessly to Cadillacs. In 1947, General Motors’ styling chief, Harley Earl, was fixated with the twin tail booms on Lockheed’s WWII P-38 Lightning fighter plane. So he told his designers to play around with fins. The first modest pair appeared on Cadillac’s 1948 models and turned the market on its head. The competition went back to their drawing boards and an arms race of a different sort was on: an orgy of ostentation, a carousal of chrome, a surfeit of the superfluous. Car-makers experimented with adornment the way rockers experiment with drugs. By 1959, this untrammelled creative glut found its final over-emphasis: GM’s Firebird III Dream Car sported no fewer than nine fins­ still the world record—while Cadillac’s nearly six metre-long Eldorado bore the ultimate altitudinal expression of fins at more than 300 millimetres high.

Those preposterous cars found eager buyers in a populace intoxicated with post­war optimism and affluence. They were conceived and built in a time of seemingly unlimited resources: iron ore was cheap, as was the coal and oil to turn it into steel. The automakers were thriving, yet nevertheless enjoyed big cash subsidies. Petrol was so abundant and inexpensive, it was a fleeting afterthought.

Conversely, both manufacturers and the market were untroubled by constraints: vehicle safety laws were practi­cally absent—seat belts weren’t even standard—and fuel economy and carbon emission statutes were unimaginable. Anything was possible.

And so it may well have been in the Cambrian. If the researchers are correct, and Earth was bathed in oxygen—maybe an algal boom saw a jump in photosynthesis, or massive mountain-building epochs, glaciation and subse­quent erosion buried organic matter that would have otherwise converted the gas—it would have granted a generous subsidy to life itself. Larger, more complex animals with respiratory and circulatory systems could pursue a more active, energetic lifestyle, and other creatures. An abundance of new body-building materials such as calcium and chitin would have made new body plans and appendages possible; all it needed was an evolutionary driver.

One theory, ‘Snowball Earth’, points to a succession of ice ages both global and regional between 725 million and 580 million years ago. These were some of the most extensive glaciations ever, yet punctuated warm periods with global aver­ages as high as 50°C.

A concert of conditions, a super­abundance of resources and more than a smidgeon of contingency likely created the design lab for the Cambrian Explosion, and, like Detroit, Nature sometimes squandered the windfall: the Cambrian shales are full of fossil animals so outlandish they were given fanciful names like Hallucigenia and Anomalocaris (abnormal shrimp), a two-metre-long predator with stalked, compound eyes of 16,000 facets each. Opabinia had five eyes and mouth-parts on the end of a prehensile proboscis. Competition pushed such designs to their ultimate expression, as it did GM’s Dream Car, but in the end, evolution and the auto industry are both slowed by the same handbrake: resources become tighter, niches get crowded, and constraints begin to close in. 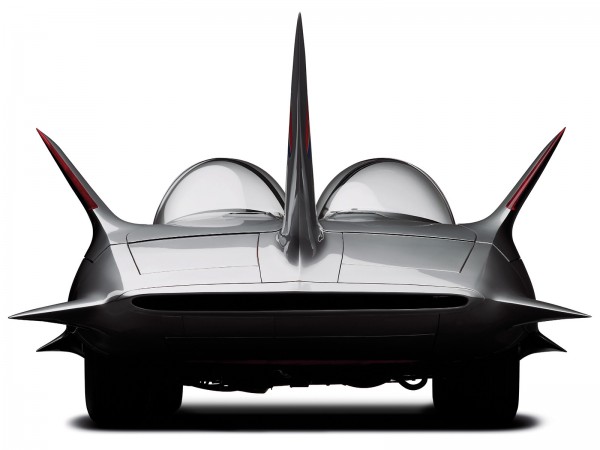 In July this year, Detroit filed for bank­ruptcy. American manufacturers, like their global contemporaries, are nowadays subject to stringent design, gas mileage and safety legislation. Consequently, many of the world’s cars, shaped by these powerful forces, look much the same. The flamboyant idiosyn­crasies are largely gone, and so it is with Nature: both have settled on designs that the prevailing environment permits.

Some sectors of the public now view immoderate vehicles, such as the Hummer, with opprobrium, because the car has helped to create Earth’s next great upheaval­ climate change. Ironically, the same carbon that is shedding light on our beginnings will have a profound influence on our fate.