It’s not the economy that will finish Earth off. It’s not even the environment. It’s physics (and maybe a bit of chemistry). Earth’s end will be a nuclear disaster; if not at the hands of some zealous despot, then most certainly at the hands of the very body that has granted us life all these millennia—the Sun.

Put aside for the moment that the human race could yet be extirpated by catastrophic biological failure, supervolcanoes, perverted nanotechnology, some bioengineered pandemic or a random celestial collision; what we know for sure is that our solar system has hit middle age.

The Sun is really just a massive fusion reactor. It gets its glowing complexion from a thermonuclear furnace in its core, where each second, countless billions of hydrogen atoms cluster up and fuse into helium (9.2 ×1037 times each second, to be precise). At a working temperature of 13,600,000ºC, this proton-to-proton shapeshift releases around 0.7 per cent of its new, fused mass as energy. At any one second, the Sun is giving up about 4.26 million tonnes of energy—a deficit that grants you your holiday tan and powers photosynthesis so that we can stay fed.

But that solar outpouring is exhausting, literally. The Sun has now burned nearly half its core hydrogen, and as those atoms decrease, so too does the energy intensity they bring to nuclear fusion. This upsets the balanced tension inside the Sun—between the outward pressure exerted by all that conflagration, and the contracting force of the body’s own gravity. The depleting core relents a little, compressing in the grip of gravity until it’s dense enough to once again hold back the forces of pressure from without. Denser now, the core heats still more, accelerating hydrogen-helium fusion.

If that sounds like some inexorable race to self-destruction, you’re right. The Sun is compelled by its own molecular physics to ramp up its energy output, even as it slides into its autumn millennia. As a youngster, it radiated around 70 per cent of the brilliance it does now. That luminosity has increased by one per cent, roughly, every 110 million years. So in another three billion years, the Sun should be 33 per cent brighter, but by then, it won’t have long to live: 4.8 billion years from now, its core hydrogen will be all but spent, though it will be a blinding omnipresence—67 per cent more luminous still.

Then, like any other starving body, the Sun will begin to consume its own essence, resorting to gleaning residual hydrogen from a thin shell that wraps its core. By then it will be 120 per cent brighter than today, a resplend­ence that will blazon its death—at least in this first stage of its cycle.

What will all this stellar physics mean for the Earth? Well, as the Sun gets ever brighter, the extra solar radiation reaching us will speed up the weathering rate of silicate minerals. That sounds harmless enough, but in fact it spells the end of carbon-based life, such as us. That accelerated weathering will unlock soil carbon dioxide (CO2) and convert it into dissolved HCO3—bicarbonate—to be washed down rivers and streams into the sea. Should it pick up certain calcium and magnesium ions on the way, it will also remove carbon from the oceans.

That potentially massive reduction in CO2 would be great news for a civilisation still battling the ravages of climate change, but physics is blind to our suffering: within 500 million years, so much CO2 will have been sucked out of the atmosphere that C3 plants such as ryegrass, clover, wheat and kale will start to die. Plants that run a different chemical pathway may survive longer, but eventu­ally all plant life on Earth will fail, along with anything that depends on it… which is nearly everything.

So that’s pretty much the end of humans—assuming we’ve endured thus far—unless by then we’re able to synthesise nutritional foods from something other than carbon bases. In the interests of optimism, let’s assume we have, and somehow survive for another billion years: after this, our problems will just be starting. By then, as we already know, the Sun will be about 10 per cent more intense. That doesn’t sound much, but it will drive global average surface temperatures to 47ºC.

That’ll be enough to evaporate the oceans, precipitating one, or possibly both, of two theoretical cataclysms: a ‘moist greenhouse’ in which the oceans disappear in as little as a billion years’ time, and the ‘runaway green­house’ in which the seas survive for longer but feed a positive loop that eventually sends surface temperatures soaring to more than 900ºC. With no lubricant, plate tectonics will seize, and the continents—wherever they are by then—will grind to a halt. With the end of volcanism, heat will remain trapped inside the planet’s core and mantle. Nevertheless, the Earth’s surface will be so drenched in water vapour that it will literally start to dissolve.

In either event, 2.8 billion years from now, the planet will become a vast, salty desert. There will be no life on the surface—here, even bacteria will have died out when temper­atures hit 140ºC, the threshold at which DNA breaks down. The only survivors will be thermophiles—organisms that can survive in extreme conditions—taking refuge deep underground, and their days are numbered too, as the Earth’s core temperature continues to climb. 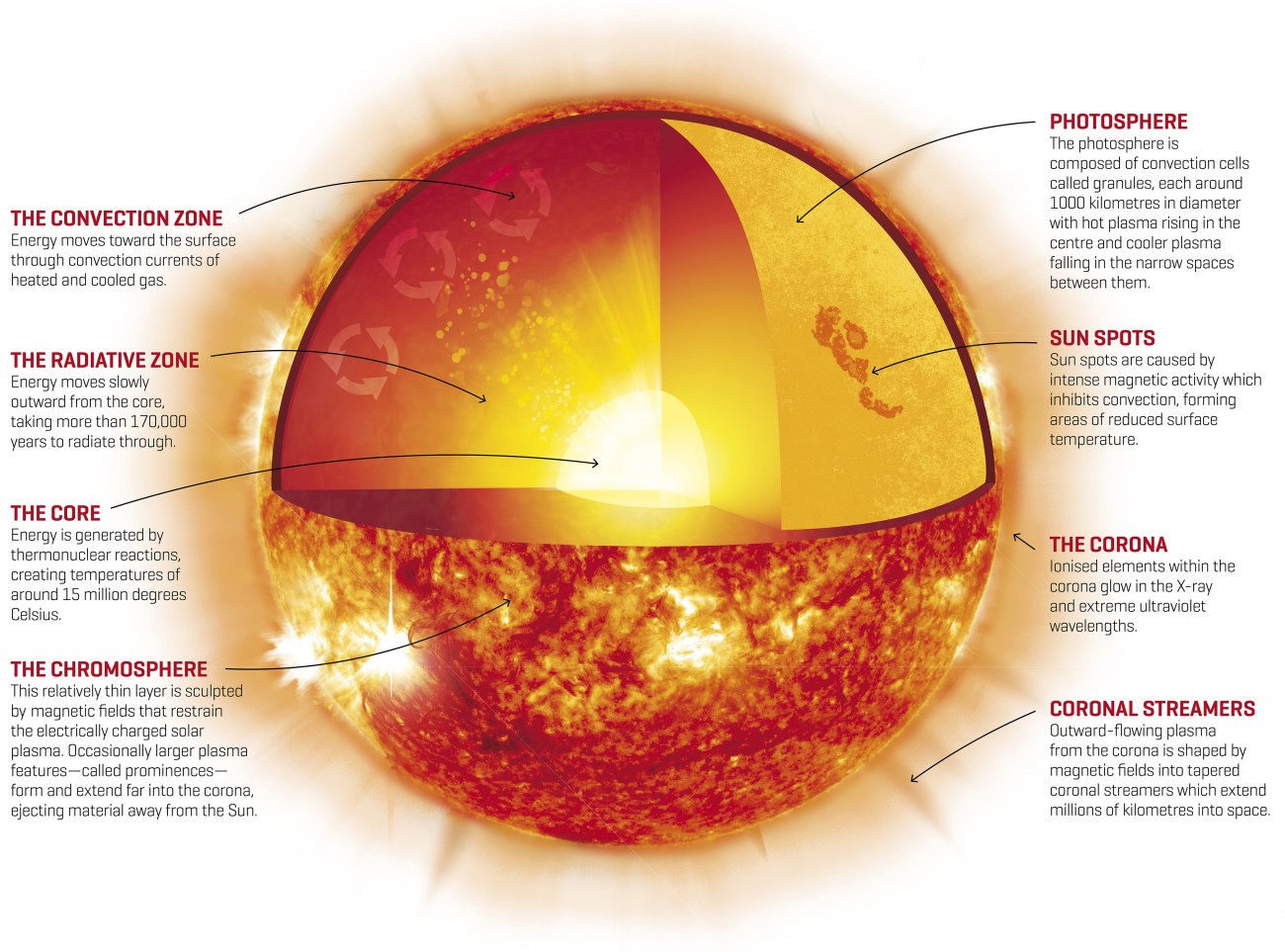 Stars live not once, but many times, and the Sun will, in about five billion years, morph into another entity. It will quickly exhaust any remaining shell hydrogen, and the rapidly increasing temperature in the core will pump up a vast gas envelope, the shroud of the Sun’s new discarnate form as a red giant.

Cooler now, the Sun will glow a dull reddish-orange, but will be many times brighter thanks to its monumental size­ hundreds of times larger than its former self. By 12 billion years of age, it will be so large—180,000,000 kilometres across—that it will engulf Mercury and Venus and draw so near the Earth that our once-blue planet will begin to melt. The atmosphere will evapo­rate, and the planet’s face will be an ocean of magma—much as it once was—broiling in more than 2130°C.

The Moon’s orbit, buckled by the Sun’s monstrous aura, will career so close to the Earth that tidal forces will tear it apart. Our beloved companion will be just a ring of debris circling a scarlet sky. Pieces of it will routinely crash into its parent. Then eventu­ally our own firmament, drawn ever closer to its nemesis, will simply start to vaporise. First the crust will be stripped away, then the mantle, ground to dust in a fiery ether.

Finally, after no more than 200 years, the last grains of Earth’s core will be blown away on the solar gales. Our planet, the place where life arose, where dinosaurs ruled, where humans built civilisations and great works, where they eventually acquired the technology to leave their own planet, and learned enough to realise this conflagration would be their eventual fate, will leave no greater trace than a very slight increase in the metallic content of the star that subsumed it.