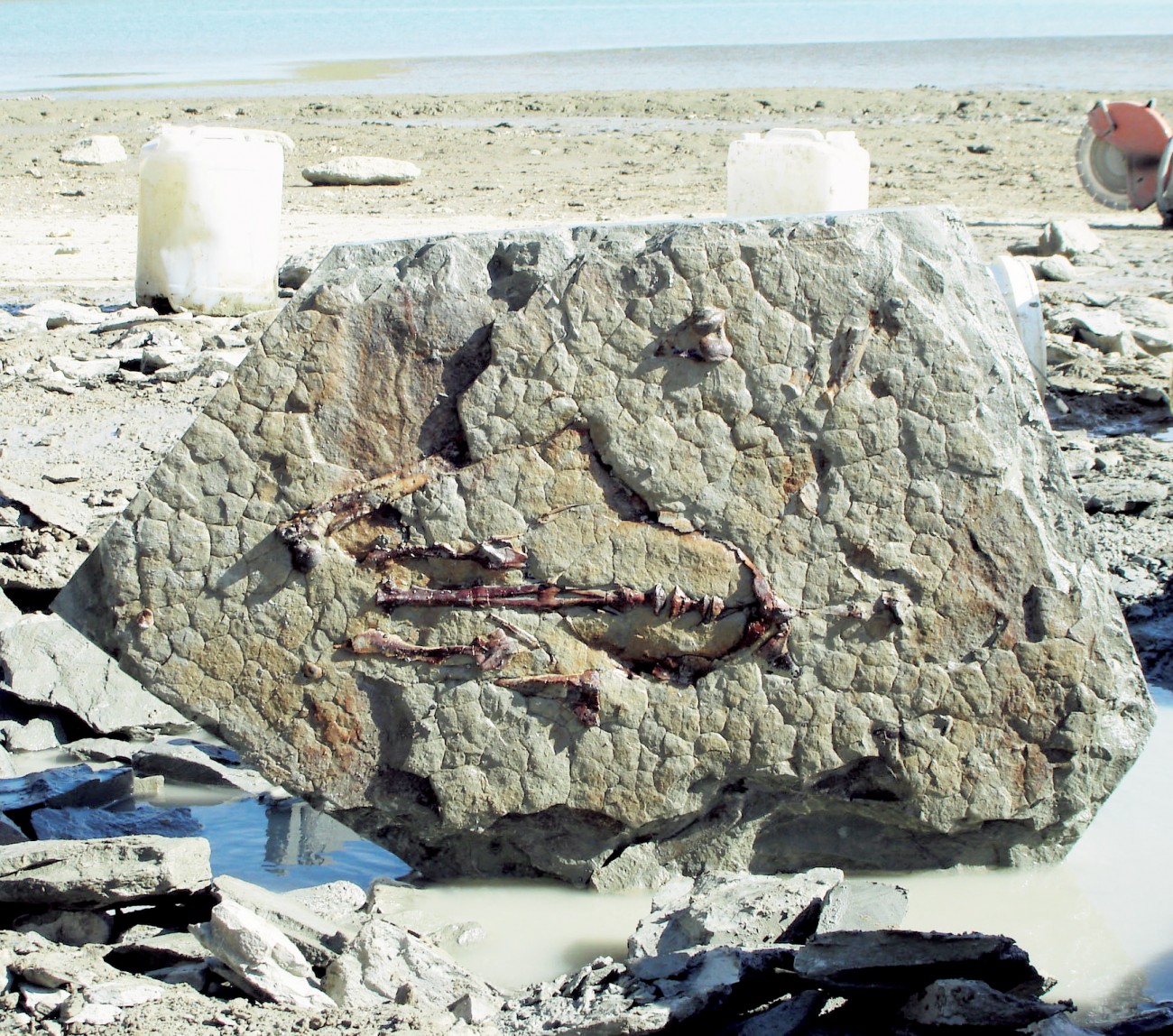 Penguins are the heroes of many children’s books and videos, being known and loved throughout the world for their comical walk and distinctive coats. Emperor penguins are the largest living penguins, reaching heights of 1.2 m and weights of 20–40 kg. However, there were once far larger penguins waddling across the earth.

In January 2006, the children of the Hamilton Junior Naturalist Club (JUNATs) discovered the fos­silised remains of a penguin on the foreshore of the Te Waitere Inlet at Kawhia. At first glance, the fossilised bones resembled rusty iron, however, amateur archaeologist Chris Templer was present on the trip and immediately recognised that the fossil was, in fact, a penguin. Though missing the skull, the pen­guin skeleton is otherwise almost complete, which makes it a very important scientific find as most other penguin fossils consist of only a few bones. One of the difficulties with unearthing a fossil on a muddy foreshore is that it can be rapidly covered by mud deposited by the tides. However, the JUNATs also realised that the proper removal of the fossil would require careful planning, so they took the risk of leaving the fossil until they could return with appropriate tools. The recovery involved cutting a trench in the rock and making a horizontal slice under the fossil. The remains were then lifted out embedded in a large rock slab.

Having experience in fossil stabi­lisation, Chris Templer removed re­sidual debris from around the bones and coated the exposed bone sur­faces with diluted polyvinyl acetate.

The penguin fossil was placed in a custom-built cradle and anchored in place using a plaster mold. The fos­sil was then moved to the Waikato Museum and housed under control­led conditions. As it is anticipated that the fossil will undergo further rounds of preservation in the future, stabilisation techniques have been restricted to reversible methods. The fossil has been exhibited in the foyer of the Waikato Museum since the end of May, 2006.

We know from the structure and arrangement of the bones that the fossil is a penguin. The key bones required for description and identifi­cation of penguins include the wing bones, coracoid and tibiotarsus. The straight shafts of the femur and humerus suggest the bird belongs to the genus Palaeeudyptes.

By comparing the length of the fossilised wing bone with that of an adult emperor penguin, we know that the fossil penguin was far larger. The fossilised penguin’s humerus measures 180 mm, the emperor’s 128 mm, and the little blue penguin’s, 46 mm. It is likely that this bird was as tall as an adult human—at least 1.5 m in height.

It is not known why the early fossil penguins were so large, but they may have evolved before large predators. Larger penguins became extinct at the time that seals and smaller whales appeared.

This is the most complete fossil­ised penguin found anywhere in the world as far as we know, and there­fore has the potential to solve many problems in understanding the evolution of fossil penguins. Given that all known penguins (living and fossilised) are found in the Southern hemisphere, it is likely that penguins evolved there. New Zealand has an extensive fossil record of penguins with some 13 species currently recognised (see box).

Based on the established age of rocks in the Te Kuiti Group, which are widespread in the Kawhia area, it is likely that the penguin is Oligocene, 25–30 million years old. As a fossil of this antiquity lies well outside the sensitivity range of carbon dating, a rock specimen has been removed for further dating based on the minute foraminifera fossils contained within. Much of modern New Zealand was sub­merged during the Oligocene. The Kawhia area was a series of small low-lying islands. Larger marine species such as sea urchins, oysters like those found fossilised in lime­stone at Marokopa, other molluscs and large sharks as well as giant penguins were common in the shal­low seas.

There have been a few single bones discovered in the South Island, chiefly at Oamaru, but also at Burnside, near Dunedin, and near Tiromoana, between Punakaiki and Charleston on the West Coast. Three more recent specimens were found at Motunau in North Canterbury. I am only aware of one bone found previously in the North Island, also at Kawhia.

Overseas, penguin bones have also been discovered in Seymour Island, Southern Australia, Argentina, Peru and Southern Africa. However, the recently found Kawhia specimen is the most complete ancient penguin skel­eton ever found. Most fossil penguins fall within the size range of modern penguins. In total, 13 genera and 14 extinct species of penguins have been recognised in NZ, but a little uncertainty attaches to this as precise identifi cation on the basis of just a few bones is not easy.

Hamilton Junior Naturalist Club, known as “JUNATs” began in 1962. It is an active club for 10–17 year olds interested in all aspects of natural his­tory and preservation in New Zealand. The club meets every Friday night during school terms at the Waikato Institute of Technology Horticul­ture Centre at the Rose Gardens on Cobham Drive, 7.00 p.m.–8.30 p.m. The speakers cover a wide range of topics—fossils, earthquakes and volcanoes, native plants, marine and freshwater biology, native birds and insects and reptiles—in fact, JUNATs try to cover most topics that children show an interest in. The JUNATs also plan at least one weekend or field trip somewhere equally exciting. These field trips give members and their parents the chance to get to know one other and the opportunity to explore new interests, while tramping, caving, canoeing, abseiling, snorkelling and stargazing.