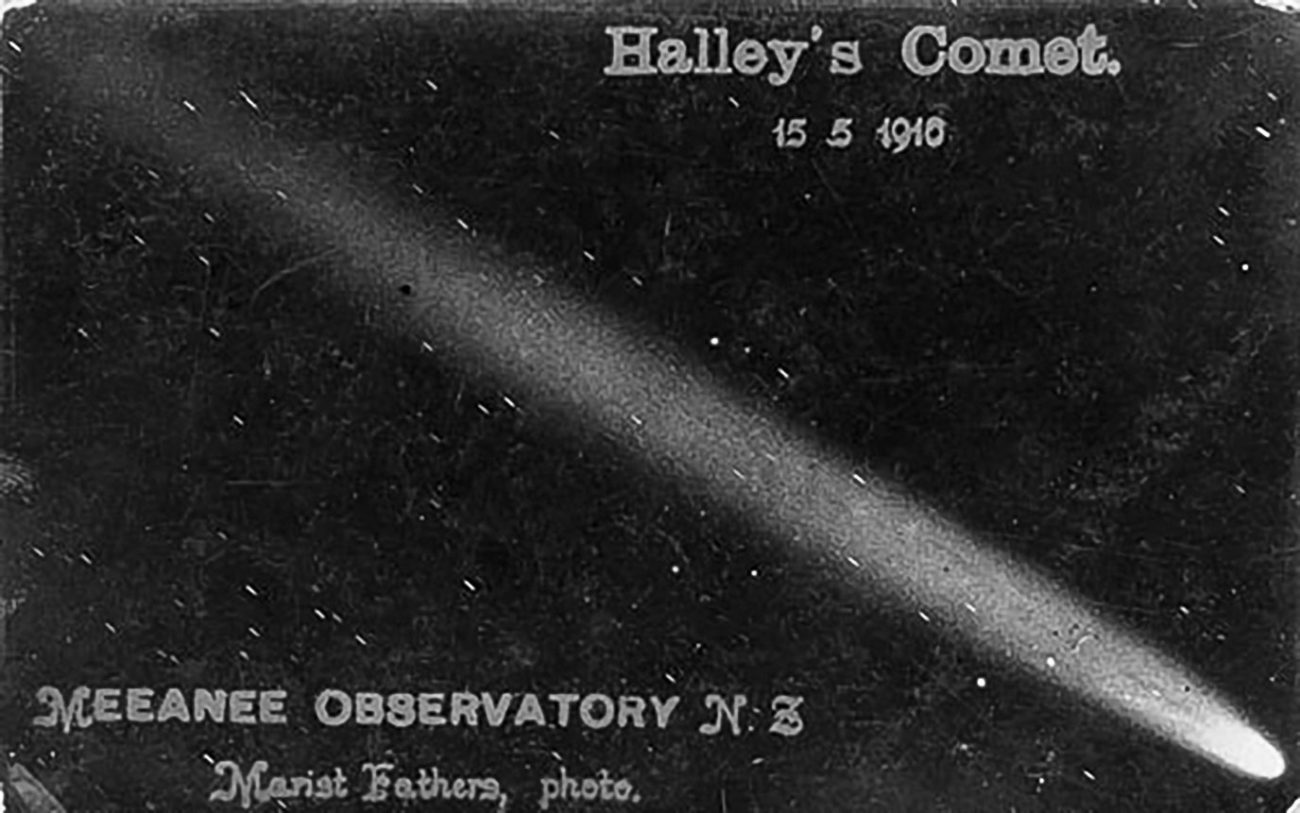 In January 1910, as Halley’s Comet hurtled toward Earth, the eminent French astronomer Camille Flammarion sounded a warning. The comet’s appearance in the night sky was likely to be as striking as it had been in early 1066, when King Harold II of England looked up at it with foreboding. (Later that year, he lost the Battle of Hastings.)

It had been calculated that the comet would pass across the sun on May 18, 1910, and on this occasion its tail, which extended millions of kilometres through space, would sweep over the face of Earth itself. What effect would this have?

Flammarion predicted that if the tail contained hydrogen, and if that combined with the oxygen in our atmosphere, then everyone on Earth would die through suffocation.

A reduction of nitrogen, on the other hand, would see the human race perish in what he envisioned as a paroxysm of joy and delirium.

New Zealand newspapers avidly reported Flammarion’s prognostications. The Herald called him “the weirdest and most imaginative astronomer in France”.

When, in February, spectroscopic analysis of Halley’s Comet detected traces of cyanogen, Flammarion was quick to suggest that the lethal poison “would impregnate the atmosphere and possibly snuff out all life on the planet”. This prompted a brisk trade in “comet pills” and gas masks.

The idea of a comet with a chemical sting in its tail had been vividly imagined just four years earlier by HG Wells in his novel In the Days of the Comet. In it, a green trailing cloud radically affects people’s attitudes and behaviour, bringing about the end of voracious capitalism, and ushering in a new age of cooperation, equality and sexual liberation.

At a lecture in Dunedin in the middle of May 1910, the Reverend P W Fairclough, a fellow of the Royal Astronomical Society, downplayed the possibility of any danger, physical or moral. He had calculated that as Earth drove through Halley’s ghostly tail, it would capture some 300 billion particles of “tail stuff”—the equivalent of a mere cubic centimetre of matter. “What a terrific bombardment!” said Fairclough, sarcastically. Furthermore, it was unlikely that any of the tiny particles would settle to the ground within a year. “The bottling of air on the 19th will therefore not be a very profitable business,” he added, taking a swipe at an Oxford astronomy professor who had encouraged people to do exactly that for the sake of posterity.

As Halley’s Comet drew closer, it transfixed viewers, with some likening it to a searchlight beam playing across the heavens. By May 18, its tail stretched across 45 degrees of sky. For the first time in history, it was photographed, some of the world’s clearest images being taken by David Kennedy, a Marist priest, and his students at an observatory he had established in Hawke’s Bay.

For many people, the comet caused an overwhelming sense of portentous dread. Some linked the comet to the death of Edward VII, who was laid to rest on May 20; others to the mysterious disappearance of the steamer Waratah the previous year. And, catching the modern ear, in October 1910, long after the comet had left our skies, a Taranaki “medical man” blamed “obnoxious” gases in its tail for the outbreak of a virulent new influenza.