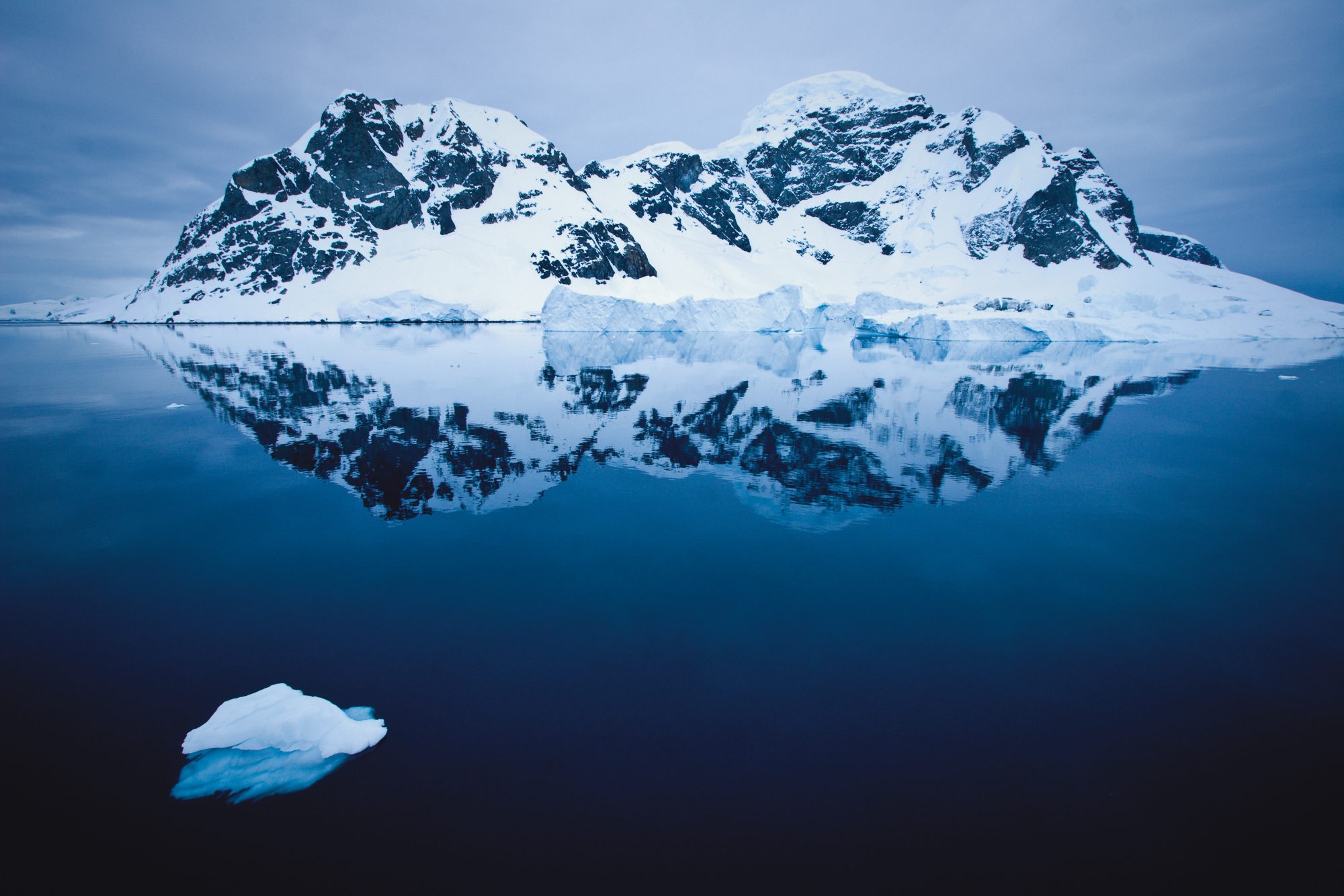 The rocky nesting sites of the Adelie penguins spread up the gently sloping hill from Circumcision Bay on Peter­mann Island, on the west coast of the Antarctic Peninsula. The water views which stretch across to Graham Land are spectacular and there’s a penguin-perfect beaching area near­by, hard to come by in these parts.

But there’s a new gang in town—the bigger, bolder gentoo penguins, which have been steadily taking over the patch. A century ago they only had 56 nests here, but today gentoos occupy 2200. Over the same period, Adelie nests have de­clined from 925 to fewer than 400. Adelies are a useful index of environmental change because they always return to their natal colonies to breed. “Given their site-specific proclivi­ties,” suggests Ron Naveen, founder of the US-based sci­ence and educational foundation Oceanites, “the alternate explanation is that the Adelies are dying off.”

A dramatic changing of the guard is happening in other parts of the peninsula as well, as ice-loving Adelies disap­pear and gentoos move in. Last year, 21 gentoo nests were found at Vernadsky Station on Galindez Island where there were none a couple of years before. At Arthur Harbour, the breeding population of Adelies has plummeted from about 15,000 thirty years ago to fewer than 5000 now.

Is it something to do with climate change? It looks a likely culprit. The temperature changes are more evident on the Antarctic Peninsula than the rest of the continent, with average mid-winter air temperatures increasing 4–5°C and sea temperatures rising more than 1.2°C over the past 50 years. But things are never so simple. Chinstrap penguin numbers have also declined nearly everywhere on the pe­ninsula, and traditionally they increase in seasons with less sea ice. So while it is clear that life is changing rapidly on the peninsula, what exactly is causing the change remains less evident.

The Antarctic Peninsula stretches north into the Drake Passage towards South America, west of the Weddell Sea. Unlike East Antarctica, its coast is rugged, with high mountains that plunge sharply into the sea. The peninsula also has milder temperatures, prolific wildlife and is relatively easy to get to—it takes just two days on a boat from South Ameri­ca—which has made it the primary tourist destination in Ant­arctica. It’s also the wettest part of the continent, receiving some 700 mm of precipitation annually, predominantly as wet snow, although long-term tourism operators are now report­ing more rain and hail.

Earlier this year, the disintegration of the 13,680 sq km Wilkins Ice Shelf in the peninsula’s southwest highlighted once again that this is one of the fastest-warming regions on Earth. Temperatures have gone up and down here in the past—ice-core samples have shown that the region has experienced an ice age about every 100,000 years, with warmer periods of 10–20,000 years—but it’s the speed and extent of change that is so alarming. Ice that has survived previous fluc­tuations has been affected in this era, and the pace of change is accelerating. A British Antarctic Survey (BAS) study of 244 Antarctic Peninsula glaciers found that 87 per cent of them have retreated during the past 40 years. Sjogren Glacier, at the peninsula’s northern tip, has retreated 8 km since 1993. Just 50 years ago, 62 per cent of the glaciers were advancing.

One of the immediate concerns is that ice shelves under­pin glaciers, like a cork in a bottle, and their disintegration may result in the glaciers disappearing at an even faster rate as they slide rapidly into the sea.

But Jacques Sirois, a French-Canadian veteran of 36 voy­ages to the Antarctic Peninsula and a similar number to the Arctic, says that the effects of climate change are far more visible in the Arctic than on the peninsula. “There is so much thermal inertia [the ability of a material to conduct and store heat] in Antarctica, because there is so much more ice here,” he says. With 90 per cent of the world’s ice bound up in Ant­arctica, it’s like defrosting a whole frozen chook, whereas the Arctic is like a flat minute steak in comparison.

Many animal populations have shown they can adapt to a changing world. A University of North Carolina study of old Adelie penguin colonies on Anvers Island, on the peninsula’s western flank, suggests that Adelies living 500 years ago ate a lot of squid but, during a cold snap between 1500 and 1850 (sometimes called the “Little Ice Age”), their diet changed to include more silverfish (any of various fishes having silvery scales). Fifty years ago, studies showed that Adelies ate main­ly krill, but Oceanites’ observations suggest that in the past few years they’ve begun eating more fish again. “We observe more and more white Adelie guano rather than krill-stained pink,” Sirios says.

Some species seem to be benefiting from the warmer weather; Sirois notes that the population of Antarctic fur seals has bounced back to near pre-sealing levels. “We’re talking about 3–4 million fur seals coming back from almost nothing.” The numbers of blue-eyed shags, the population of which dropped throughout the peninsula in the 1990s, seem to have stabilised while Cuverville, Paulet and Pleneau Island populations have doubled in seven years. Antarctica’s two native flowering plant species, the Antarctic pearlwort and Antarctic hair grass, are both flourishing in the warmer tem­peratures; on Galindez Island, BAS scientists report a mas­sive 25-fold increase.

This, however, is no reason to be sanguine; on King George Island both Adelie and chinstrap penguins are de­clining. Sirois suggests this could be due to less krill in the ocean, and less krill because there is less sea ice. Krill use the sea ice as a nursery, and in the winter shelter under it where they can feed on algae.

Krill is a vital component in the Antarctic environment; birds, fish, whales and seals live directly on it and other ani­mals depend on them in turn. “It’s rare to have one species so dominant in an ecosystem,” says Steve Nicol, leader of the Southern Ocean Ecosystem Program at the Australian Ant­arctic Division. 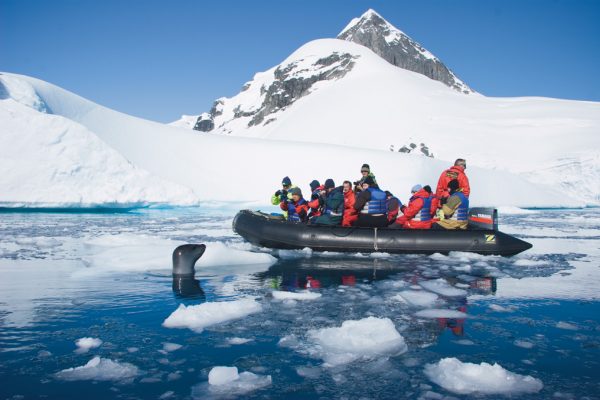 For the past 20 years scientists have been trying to estimate how much krill there is, and its distribution. The consensus now is that there is about 200–500 million tonnes, much of which lives in the South Atlantic area, immediately to the east of the peninsula. There are often dramatic cycles in the abun­dance of krill in a region, which could explain the changing populations of other animals, such as penguins. But scientists don’t yet know why these fluctuations occur.

Nicol doesn’t believe climate change will increase sea tem­peratures beyond the 5°C in which krill can survive, but it will continue to reduce the limited amount of sea ice, and therefore krill populations in the South Atlantic.

Of course, changing temperatures are not the only force that krill may have to reckon with. There is also the grow­ing krill industry. Historically, the limited market and huge infrastructure requirements to catch and process krill in re­mote waters meant that krill trawling wasn’t terribly attrac­tive. But new markets in the health and food industries—krill oil is the latest source of Omega 3—and a growing need for fish meal (for use in fish farming, pet foods and rose ferti­liser) may change that. In addition, notes Nicol, the changing climate on the Antarctic Peninsula may open the region to fishing year-round.

This worries many whale and dolphin conservationists who want krill, along with other Antarctic marine stocks, left completely alone.

says Rob Lott of the UK branch of the Whale and Dolphin Conservation Society. “Some species of whales are at very critical levels now. Of the very largest, the blue whale, there may be just 10,000 left on the planet.”

But Antarctica may yet suffer a more pernicious human threat. An estimated 47,000 tourists travelled to the frozen continent last summer, 10,000 more than the year before and five times more than a decade ago. There are more and larger cruise boats making the journey across Drake Pas­sage, some with more than 500 people aboard. The number of cruise-only passengers (those who don’t step off the ship) has doubled in the past year. It seems that touring Antarc­tica is no longer the preserve of the serious naturalist. “It used to be that everyone who came on board had their own binoculars,” says Sirois. “Now hardly anyone does.” Most, however, don’t even make landfall and numbers are restrict­ed for those who do. So far there is little evidence that this new tide of humanity is having a detrimental impact on this vast continent.

However, Sirois believes that visitors in the future are likely to be restricted, as people confront the reality of their carbon footprint.

A mid-sized cruise ship burns through some 16 tonnes of fuel a day, which gives each passenger a carbon debt of about 5–8 tonnes. Add to this the eight tonnes or so of emissions each Australian creates by flying to the tip of South America and back, and the carbon footprint for an Antarctic Peninsula trip is more than the average Australian household emits in an entire year.

“This is where the crunch will eventually come,” says Sirois. “We are probably the last generation to travel in this way.”

So the great white scoresheet remains open, and the black marks on our universal environmental record stand out clearly. Nearly everyone who ventures to Antarctica has “wanted to travel here all their life”, and when they leave, many describe their experience in almost spiritual terms. As one of the growing numbers of people blessed to have visited, I know it is our generation’s imperative to pass on a place that’s as white as possible.

Keeping an eye on ice