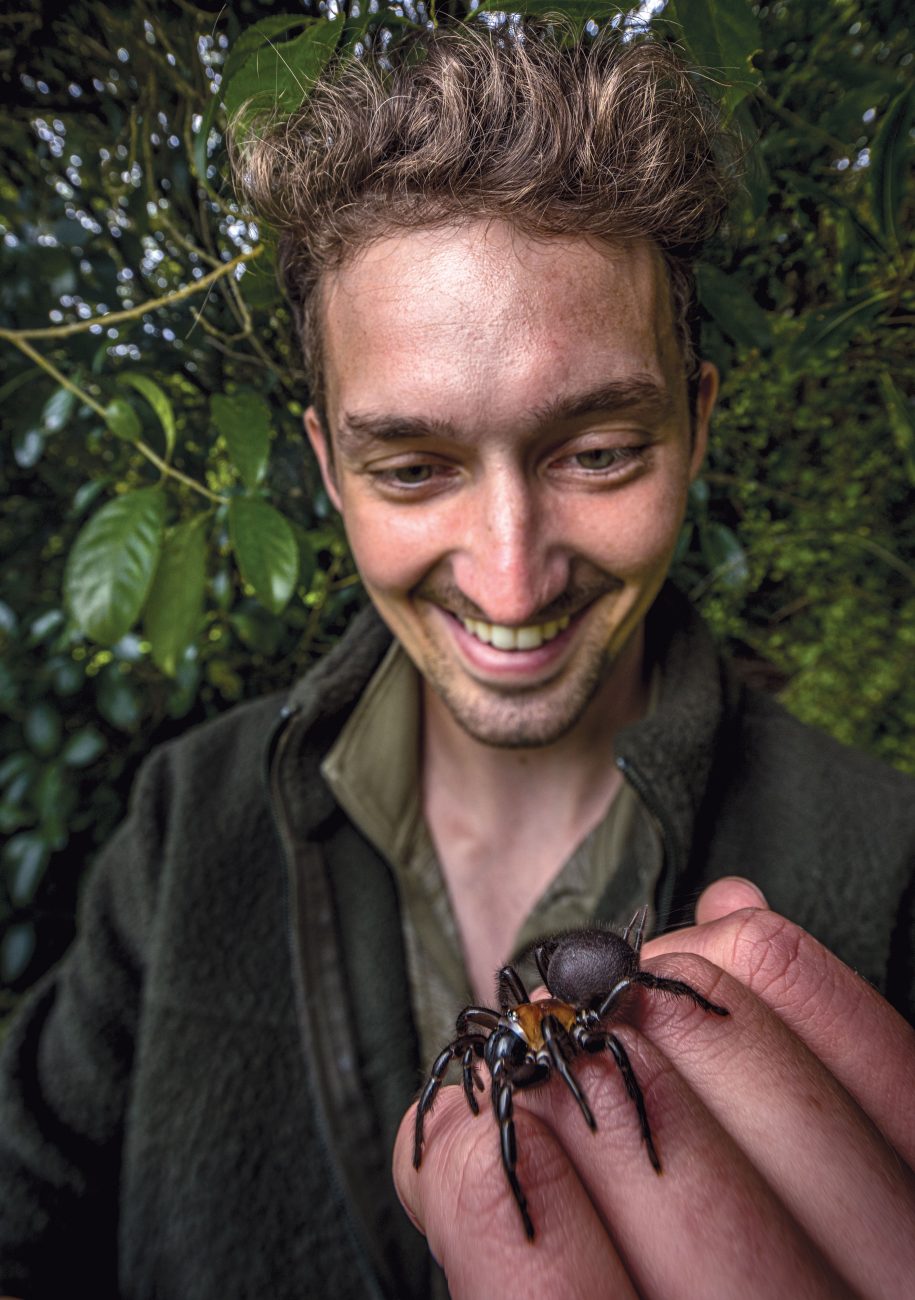 Samuel Purdie has always been obsessed with critters. As a kid growing up in Rotorua, he caught spiders in his backyard and kept green and golden bell frogs in a big tank. He once took a hedgehog to school—much to his teacher’s alarm. Another time, he carted a gum emperor moth caterpillar to class.

No one in his family or in his immediate life had any interest in wildlife. “I was a bit of an outlier,” he says.

His childhood interests cycled through all the ologies—palaeontology, zoology, marine biology, archaeology (after watching Indiana Jones) and entomology. He finally settled on herpetology—the study of reptiles and amphibians—after watching Steve Irwin wrestle monitor lizards and crocodiles on TV.

Purdie remembers being starstruck the first time he saw lizards in the wild: iridescent (but introduced) rainbow skinks that flashed like lightning across his uncle’s Auckland driveway. “I loved reptiles,” he says, “but as a kid, I didn’t know we had any in Aotearoa. I’d never seen a lizard in Rotorua.” Instead, Purdie thought he’d be destined for the shores of America or Australia, where he’d work with alligators or crocodiles. Like Irwin.

Fast-forward a few years and at age 23, Purdie has just published his first book, A Naturalist’s Guide to the Reptiles & Amphibians of New Zealand. It’s filled with striking close-ups of jewel-toned geckos and shimmering skinks, with many of the photographs taken by Purdie himself.

The revelation that New Zealand did have more than a few skinks and the tuatara came during his first year at the University of Otago. Purdie saw a photograph of a Tautuku gecko: a lizard decked out in khaki green with a yellow and red diamond pattern along its back. “I was just like, ‘Oh my god… there’s this gecko that’s bright red and yellow and it lives in the Catlins?! I’ve gotta see this thing!’” he says. On a university field trip, while his classmates sat and chatted, he “prowled the bushes at night” in search of the gecko. He didn’t find it.

But Purdie was hooked—and happily for him, New Zealand has a surprising specialty in lizards. Lots and lots of lizards. “We might not have three-metre-long monitor lizards, but we have some of the most diverse lizards of any temperate region and the ecology of these animals is astounding,” he says. “I mean, we’ve got lizards on the top of mountains that are covered in snow for half the year! We’ve got lizards that live on rocky little islets off the coast of Fiordland that dive into the ocean!” The lizard facts tumble like a Catlins waterfall.

After his unsuccessful gecko hunt, Purdie contacted Central Otago reptile scientist Carey Knox. “I was a pest; I sent him tonnes of emails and messages,” he says. The enthusiasm—and eye for finding critters in the field—convinced Knox. A year later, Purdie was back in the Catlins, on an official Tautuku gecko survey with him. The pair spent two days traipsing through the forest, with no luck. “Then I heard him yell out,” Purdie recounts, “and I ran.” Knox had found a Tautuku gecko peering out of a tree hole, a sunbeam illuminating its harlequin hues. Purdie describes the moment as “life changing”.

Over the past few years, his Dunedin flat has been home to multiple native tunnelweb spiders (including one he named Greta), a giant centipede, bush wētā, and a stick insect that laid hundreds of eggs. Purdie would take some of these critters to events or school visits, as a way to engage people with native wildlife.

“I had a woman cry once. She was really scared of spiders but wanted to overcome her fear,” he says. “She took a close look at the spider and ended up holding it. I think it was quite a profound experience for her.”

Purdie combines this “interactive advocacy” with macro-photography and social media. His TikTok account, featuring short wildlife videos, has amassed more than 63,000 followers and one million likes as at the time of writing. His philosophy is to show people something surprising and follow it up with an educational message. “People are much more likely to watch something than they are to go and read up on it online,” he says.

In a couple of months, Purdie will have finished writing the thesis for his master’s degree in wildlife management. He’s been researching the recently discovered Hura Te Ao gecko which lives in the mountains of Otago (see Lizards Anonymous, Issue 162). “They have this beautiful galaxy pattern—their body just looks like the night sky,” he says. And after that? “I hope to be a good scientist. But also teach lots of people about wildlife—like my conservation heroes.” Like Steve Irwin.

So would he ever wrestle a crocodile?