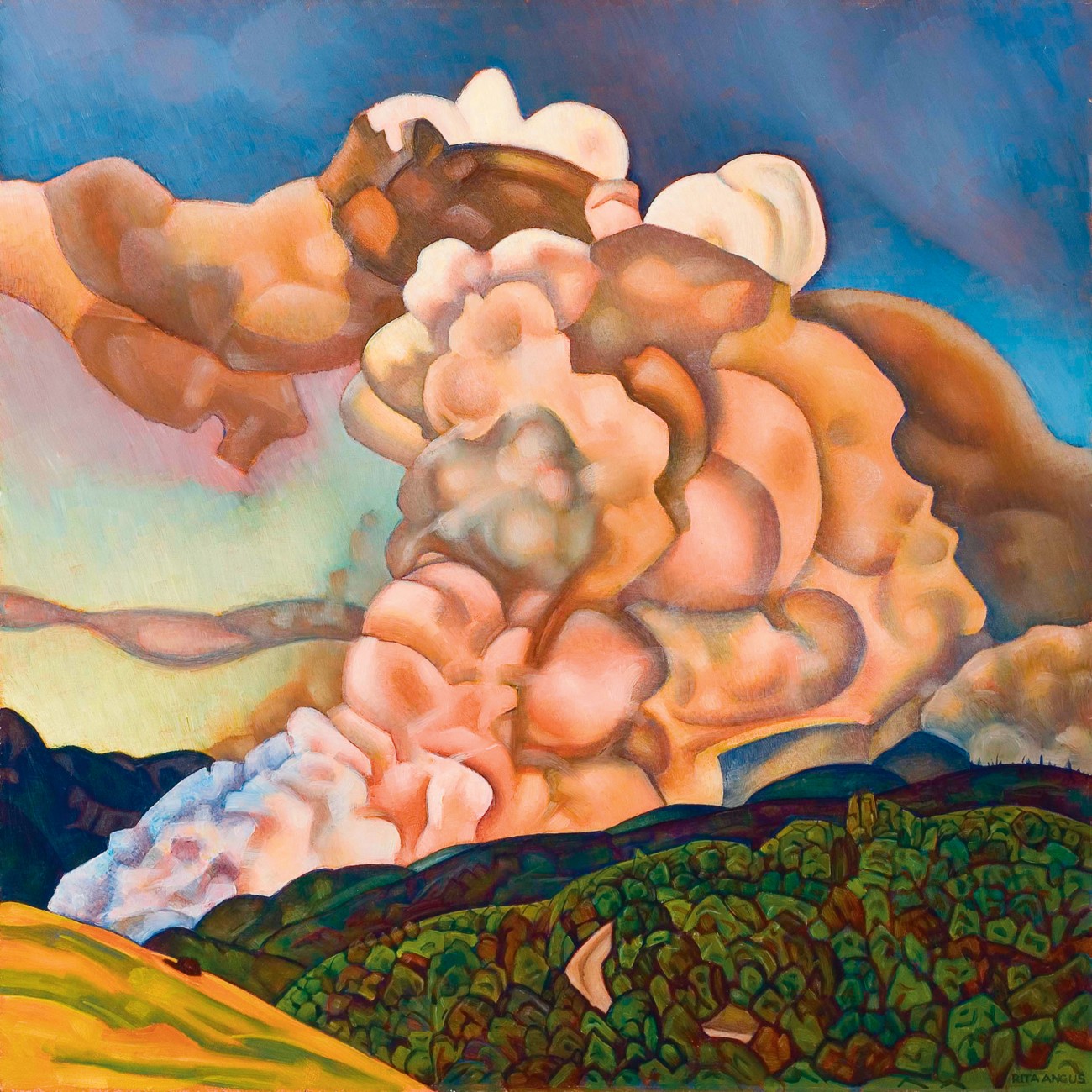 Oil paintings that were painted back in her studio. Her iconic painting, Central Otago (1953-56 and 1969), contains a portion of a tree and water sketch in its top left hand cor­ner. This painting is famous for the strength and clarity of its golden light. This light is partly a consequence of the wind.

During a broad-scale northwest flow, the air rising over the Southern Alps produces abundant rain on the west coast side of the main divide, which washes out most of the billions of tiny salt and dust particles in the air. As the air descends over Central Otago, it warms as it is compressed by the higher air pressure found at lower altitudes, and the remaining clouds rapidly evaporate. With most of the salt and dust particles washed away, the clearness of the air and the bright­ness of the landscape is striking to any visitor to the area.

The same effect occurs in the rain shadow of the Rockies and the Andes; early explor­ers remarked on the experience of travelling all day towards hills that seemed to be only a short distance away, to which they never appeared to get any closer.

In Central Otago, Rita Angus conveyed the hallucinatory effect of the air’s clarity by piling up several landscapes, stacking one on top of the other, and using a number of horizons. Consequently, the tree and lake in the top left hand corner appear closer to the viewer than features in the foreground. Al­though the tree, lake and surrounding hills have been little changed from the original watercolour, the clouds have been signifi­cantly altered.

The speed with which clouds can change in the sky is a challenge for a painter to capture, but that also invites playfulness, and provides a freedom to create a canvas within a canvas. In the oil painting of Central Otago, Angus modified the clouds from the water colour sketch, introducing blue spaces that appear, perhaps accidentally, to shape a cartoon face with eyes, nose and mouth.

In other paintings, Rita Angus has used cloud shapes with great freedom. In Self-portrait (1966), two fish-shaped clouds en­twine in a blue sky representing Angus’ star sign, Pisces. The fish partially wrap around each other in a way that echoes the oriental symbol for yin and yang.

In AD 1968, two clouds shape the letters A and D against a blue sky, while over the land a series of objects shape the numerals 1968. This commemorates an epiphany for Angus—a lifelong pacifist—the day when she sat up and said “In the year A.D. 1968, I, Rita Angus, can do nothing about war.”

In Angus’ earlier Self-portrait (1936-37)­ which adorns the cover of Jill Trevelyan’s book, Rita Angus, An Artist’s Life—she has harnessed the clouds to echo the colour and folds of the cloth of the coat she is wearing and frame her face.

In Fog, Hawke’s Bay (1966-68), she uses a cubist technique to break up the landscape and mirror the way the eye’s focus changes from short to long and back as you drive into and out of fog.

Clouds are also central to Scrub Burning, Northern Hawke’s Bay (1965), a dramatic rendition of a pyrocumulus cloud formed from the hot column of smoke rising from a large fire. Air heated by the fire expands, becomes less dense than the surrounding air and rises rapidly. As the hot smoky air rises it encounters lower surrounding air pressure and so continues to expand. This cools the air, resulting in water gas condensing and forming clouds of water droplets. This effect can be seen in the white tops of the clouds in the painting.

The burnt vegetation also contributes water gas to the air, increasing the amount of clouds. If enough water gas is present, pyrocumulus clouds will sometimes pro­duce rain and even extinguish the fire that created them.

On this occasion, the cloud formed over a fire that was lit by Rita’s nephew, Anton Jones, as part of a contract for land clearing that the family firm was carrying out. An­gus was sensitive to the destruction of the natural environment, but was in a difficult position. Throughout her life, much of her income came from a pension provided by the family business, Angus Construction.

Intriguingly, on the right hand side of the cloud there appears to be the profile of a large expressionless face. The chin, lips, nose and forehead, perhaps, of an implacable god of progress and destruction. Near the top of the cloud is an animal shape, possibly a possum, and there’s a kumara shape in the middle. At the base of the smoke column, there is what appears to be another face, possibly with horns. The base of the column resembles the vertebrae of a spinal column, while the body of the cloud recalls the coiled intestines of a disemboweled animal. The underside of the part of the cloud extending to the left re­sembles a large shoe or boot, threatening to stamp on earth and forest.

All of which makes this magnificent paint­ing a poignant meditation on the pathos of the human condition and the destruction that occurs to produce the mundane essentials of life, such as shoes.