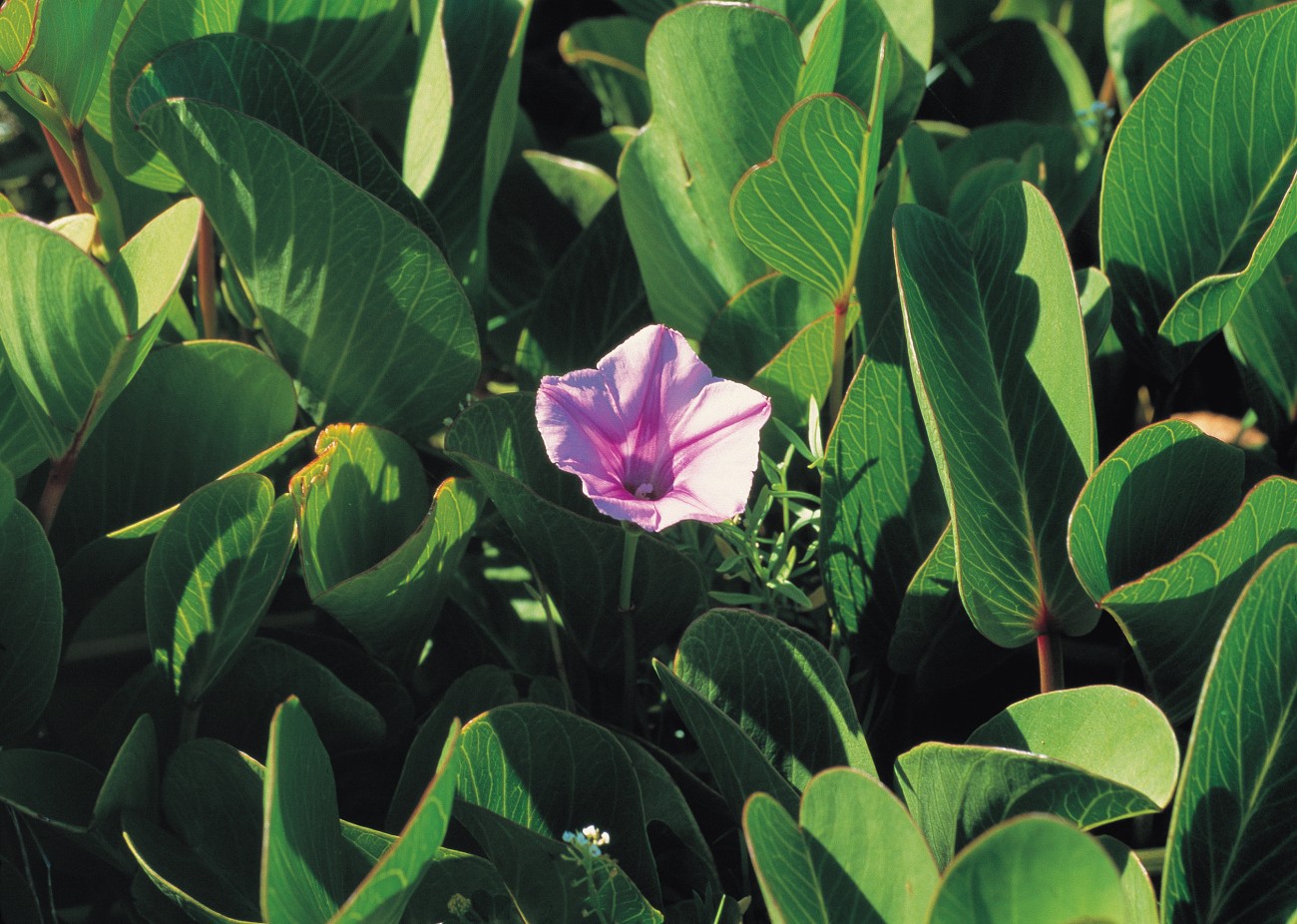 Beachcombing is a fascinating hobby. One gets to deduce what’s living out in the sea by what’s brought ashore. Aside from the usual bits of driftwood, seaweed, shell and manmade flotsam, one can also find the seeds of a range of terrestrial plants. Some are from plants whose main means of dispersal is oceanic currents. Botanists call these strand plants, because they germinate and play out their vegetative lives within the strand zone of the beach.

New Zealand has remark­ably few native strand plants, and most of those we have can be found elsewhere in the South Pacific. For example, so-called New Zealand spinach (Tetragonia tetragonoides), whose seeds are still sold by that name as a native vegetable, is a strand plant found naturally from Japan south across the Pacific to Australia and New Zealand. Its hard, conical seeds, with their characteris­tic stout horns, float in salt water for months, if not years, waiting to germinate. All that it is required for dormancy to break is for the seed to be flushed by fresh water, and this is why New Zealand spinach is most often found in the strand zone, close to locations where fresh water drains on to the beach.

Other interesting native strand plants include the beach morning glory, Ipomoea pescaprae subsp. Brasiliensis, a lush-leafed tropical convolvulus, whose dark pink or purple trumpet-shaped flowers and bright green, fleshy, narrowly heart-shaped leaves are such a feature of the beaches of the Pacific Islands. It produces small but excep­tionally buoyant seeds which have colonised virtually all the tropical and sub-tropical beaches of the world, with

New Zealand being its natural southern limit. For a long time only a single plant was known from near the southern end of Ninety Mile Beach, but it eventually succumbed to snails and slugs—a fate hastened by the fact that pines were planted around it. Fortunately, in the mid 1990s, another much larger specimen was found near Cape Maria Van Diemen.

Aside from these and a few other native examples, most of our strand plants are modern introductions. Indeed many of our beaches are now colonised each summer by dense growths of beach orache (Atriplex prostrata), the sea rockets (Cakik edentula and maritima) and the more unpleasant spiny Salsoln These hardy summer annuals first appeared on New Zealand beaches in the 1800s, from where they soon colonised even remote sandy beaches on the Chatham Islands.

Today there are virtually no beaches free of these ocean-going nomads. As a consequence, few New Zealanders would be aware of the other native strand plants, and even fewer would be lucky to see the rarest of them all, and the only one endemic to these shores, Holloway’s crystalwort (Atriplex hollowayz)—one of the most threatened species in our native flora.

The story of this plant goes back to 1849, when, in the Museum of Natural Sciences in Paris, a French botanist, Alfred Moquin­Tandon, erected a new genus of plant, Theleophyton  with one species, T billardierei, to accommo­date an unusual coastal strand plant gathered from Tasmania by French botanist and adventurer J. J. de Labillardiere (1755­1834).

Moquin-Tandon’s little plant belongs to the Chenopodiaceae family, the same family that contains silverbeet, beetroot and spinach. Moquin-Tandon recognised that Theleophyton was closely allied to the large, cosmopolitan genus A triplex, from which it differed in one respect: during fruit maturation the seed twists 90 degrees to fit within the pouched bases of the seed pod, something which doesn’t happen in Atriplex.

This distinction did not much impress the English botanist Joseph Hooker, who, in 1853, placed Moquin-Tandon’s genus and its sole species within Atriplex, as A. billardierei. Still, Hooker’s view was not universally accepted, and so over the past 151 years of its official existence, Atriplex (Theleophyton) billardierei has been shuttled back and forth between the two genera by northern-hemisphere botanists.

Meanwhile, in the southern hemisphere, Atriplex (Theleophyton) billardierei has been steadily vanishing from large chunks of its Australasian range.

During 1990, I undertook a herbarium study of New Zealand material of Atriplex billardierei and came to three conclusions: first, there seemed to be two distinct forms of the plant; second, the species seemed to be an annual; third, it seemed only to survive in the far north of the North Island and on the Chatham Islands, despite having been recorded much more widely around New Zealand in the 1800s.

Inquiries in Australia revealed that only Tasma­nian botanists were familiar with the species, and, more significantly, that one of the forms present in New Zealand was not present in Australia. This form differed from typical A. billardierei in having toothed leaves and smaller fruits and seeds.

Further research over the past decade has confirmed that there are indeed two crystalworts in New Zea­land. One is Moquin­Tandon’s Atriplex Theleophyton) billardierei, the plant once present on sandy beaches of the South and Stewart Islands and parts of Australia, and which still persists in Tasmania and the Chatham Islands, while the other is a new species, endemic to New Zealand, Atriplex hollowayi, found so far only in the far north.

(The name hollowayi honours the late director of the Department of Conser­vation Science & Research Unit, John Holloway, who was a strong supporter of biosystematic research programmes which helped resolve issues in protecting our threatened biodiversity.)

A. hollowayi is rated as “critically endangered,” while A. billardierei has been assessed as “declining.” Herbarium specimens suggest that  was once locally common in parts of the North Island, but they 1920 the species had become confined to the far north. Significant factors in the species’ decline appear to be over-collecting by early New Zealand botanists, sand mining and coastal resort development, competition from exotic strand plants, trampling by livestock and people, and summer cyclones. During the 1999/2000 summer, only two plants of A. hollowayi were recorded. However, this is not the first time the population has plummeted to such low levels. Based on an analysis of the past 10 years of monitoring, extreme population fluctuations characterise this species, so its plight, while undeniably serious, can improve, provided all plants that appear each spring survive to set seed.

For its part, Atriplex billardierei seems to be extinct on mainland Aus­tralia, and in the South and Stewart Islands of New Zealand. On Tasmania and the Chatharns it remains locally common.

Now that the biosystematic status and general ecology of both species has been determined, the next issue will be how to prevent further decline. The Department of Conservation has prepared a recovery plan to outline the various management options available for both species. However, because of the urgency of preventing the extinction of A. hollowayi, DoC botanists Lisa Forester and Nicky Syddall have undertaken some novel—for a plant, at least—manage­ment measures.

Last summer, they employed Northland resident Dave Spicer to physically protect hollowayi plants from summer storms, trampling and other threats. Spicer also undertook a thorough search for the species, discovering 16 plants in two remote beach habitats, which he fenced off to exclude stock and vehicles.

He also managed to strike cuttings from some of the larger plants, which, along with seed he has gathered, will be used to establish new populations in parts of its former range. We can only hope that these measures are successful. New Zealand has very few native strand plants, and we can ill afford to lose any of them—especially the only endemic one.