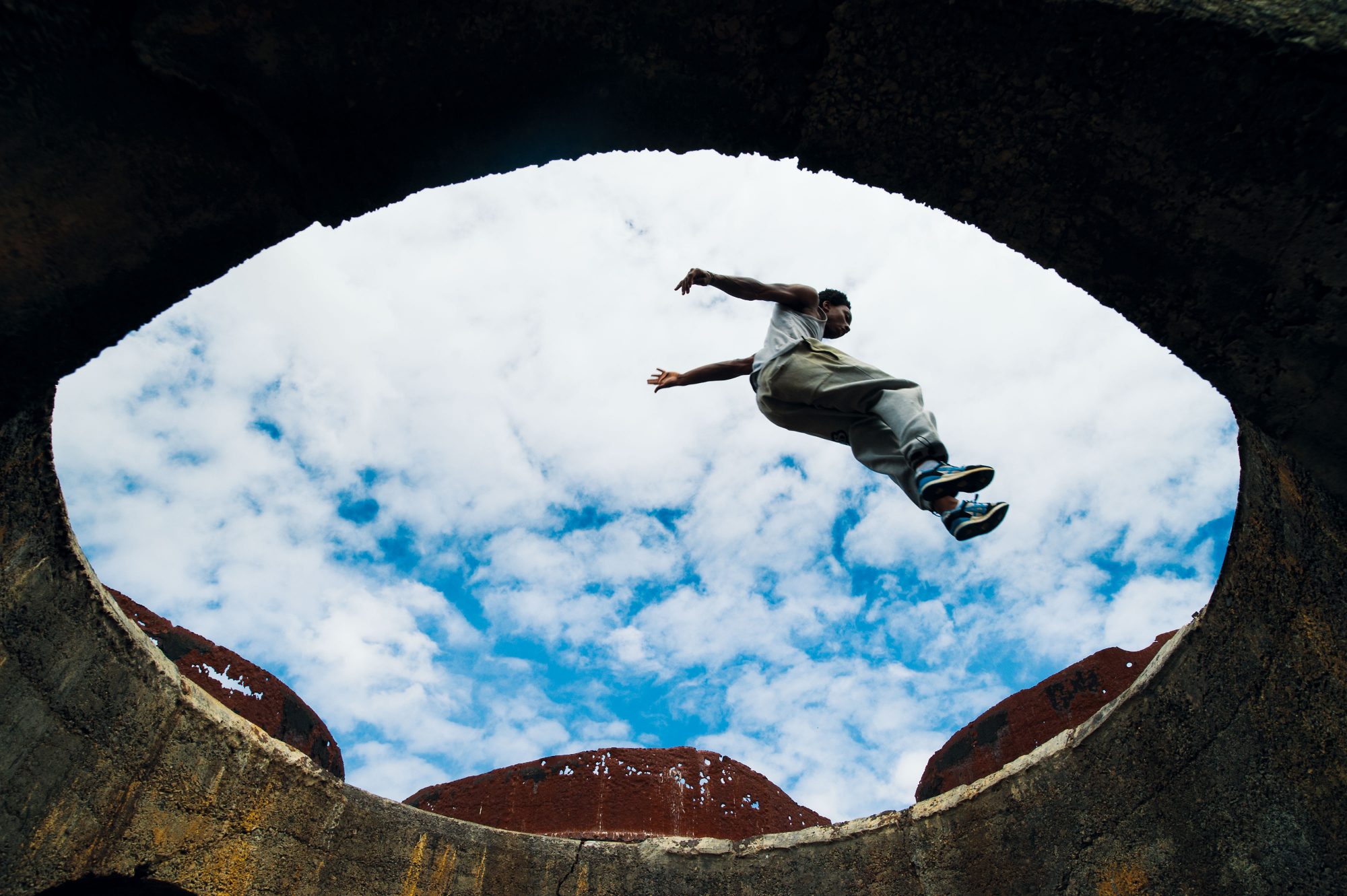 We’re going to start with a warm-up game of tag,” says Maika Hemera. “The ground is lava and you’re allowed on the rails, the steps and the concrete blocks. If you touch the ground, you have to do five push-ups.”

Hemera, a 29-year-old outdoor educa­tion teacher at Howick College in Auckland, isn’t corralling kids in a school yard. It’s 10 o’clock on a Sunday morning and he’s addressing a group of parkour practitioners and freerunners who have gathered for the October Movement Jam at Silo Park on Auckland’s waterfront. Most are in their late teens or early 20s; all are dressed in an almost identical uniform of canvas shoes, loose-fitting track pants and T-shirts. Andrew Zimmer, a 36-year-old IT consult­ant, is one of the oldest attendees—he’s here with the youngest, his 12-year-old son, Liam.

“This is such a great natural playground,” says Zimmer, referring to the urban terrain in taking pictures of the Auckland Harbour Bridge. Zimmer, also a gymnastics coach, found parkour about 18 months ago.

“Gymnastics is about perfection, and you get points deducted if you make a mistake. Parkour is all about expressing yourself,” he says.

Parkour originated in Lisses, a suburb of Paris, in the mid-1990s. A young Frenchman named David Belle was intro­duced to le parcours du combatant—an obstacle course style of military training— by his father. Belle developed and refined the technique and helped popularise parkour through video clips and TV pro­grammes. The 2003 documentary Jump London, featuring Belle and freerunner Sebastien Foucan, introduced the world to parkour.

“I had been doing a version of parkour before I saw it on the internet but I didn’t realise there was a name for it, ” says Hemera “It was nice to find out what I was doing wasn’t just jumping around.”

Hemera was one of the early adopters in Auckland, but some of the first parkour enthusiasts in New Zealand were a group from Murchison in the South Island who posted a video clip of themselves vaulting over picnic tables in 2006. Hemera started practising parkour seriously that same year. Around the same time, Sebastien Foucan took the concept to a whole new level with a jaw-dropping chase scene in the opening sequence of the James Bond movie Casino Royale. The movie cemented parkour’s place in popular culture as a new and exciting sport, but Hemera quickly learned that you can’t leap from tall build­ings in a single bound without laying solid foundations.

“I was a bit naive in the beginning,” he says. “Back when I started, there were no academies and very few experienced prac­titioners to show you what to do. It was dan­gerous. I needed knee surgery quite early on after I did a jump that was too big for me, but it taught me to be more careful. You learn about the importance of progression.”

After the game of tag at Silo Park, the traceurs (the term for a parkour practitioner) take turns to practise their progression, working on different techniques on concrete blocks. Some focus on jumping a gap from one block to another. Others, such as Dane Grant, seem to flow over the top of the blocks, bounding and leaping from one to the other with effortless grace. 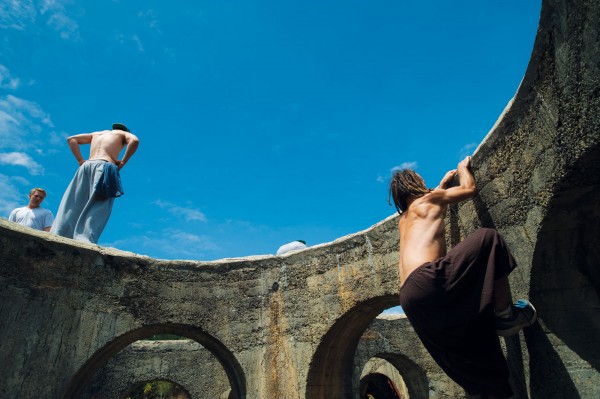 Grant is the most experienced traceur in the group. The 35-year-old from South Africa moved to New Zealand this year. He’s been practising parkour for more than 10 years and has featured in TV commer­cials and movies. He also uses his parkour skills in his role as a stuntman.

“People think parkour is adrenalin­driven, but it’s the complete opposite for me,” says Grant. “It’s a form of meditation. When I practise parkour, I have a height­ened sense of awareness and focus.”

Grant repeats the same run over and over again, looking to improve his line, his style and his speed.

“Parkour is so much more than a physical activity,” he says. “It’s about solving prob­lems and challenging yourself.

We’re math­ematicians of nature. We look for formulas and solutions to overcome obstacles.

It can have a knock-on effect in other areas of their lives, giving them confidence to try new things and take on bigger challenges.”

Solomon Riversage is the Auckland rep­resentative of the New Zealand Parkour Association (NZPA), formed in 2010. The 18-year-old sociology student at the University of Auckland credits parkour with changing his life.

“When I started parkour, I was over­weight and lazy,” says Riversage. “Through parkour, I’ve learned to value being healthy. It’s also given me an amazing community of people to hang around with. It’s a chance for them to participate and not be judged by other people.”

The NZPA organises a number of events or jams for the estimated 150–200 parkour practitioners around the country. All parkour events are non-competitive, one of the aspects that distinguishes it from freerunning, which has been described as “urban acrobatics”. Freerunning takes the fundamentals of parkour—getting around or over obstacles as efficiently as possible by running, jumping, climbing, rolling and vaulting—and adds flair and creativity in the form of backflips and other acrobatic-inspired moves. Freerunning events such as the Red Bull Art of Motion have made it popular with the YouTube generation, but more experienced traceurs such as Hemera and Grant see parkour as a purely partici­patory discipline.

“I like competition but I don’t think we need it in parkour,” says Hemera.

“Parkour teaches you to fail. That’s how you learn.”

Adds Grant: “It’s about lifting the bar a little bit higher every time you practise. Parkour is competition with yourself.”

With that, the group moves on to the Silo Park playground to continue their urban obstacle course. Hemera flips from the roof of a shipping container into the sand pit, where he does a forward roll, to the astonishment of adults and children alike.

“Children run and climb and jump and vault so naturally and have so much fun doing it,” says Riversage. “As you get older, it becomes less socially acceptable to play. It’s not cool. Parkour gives people permis­sion to play.”

There's a parasite for that