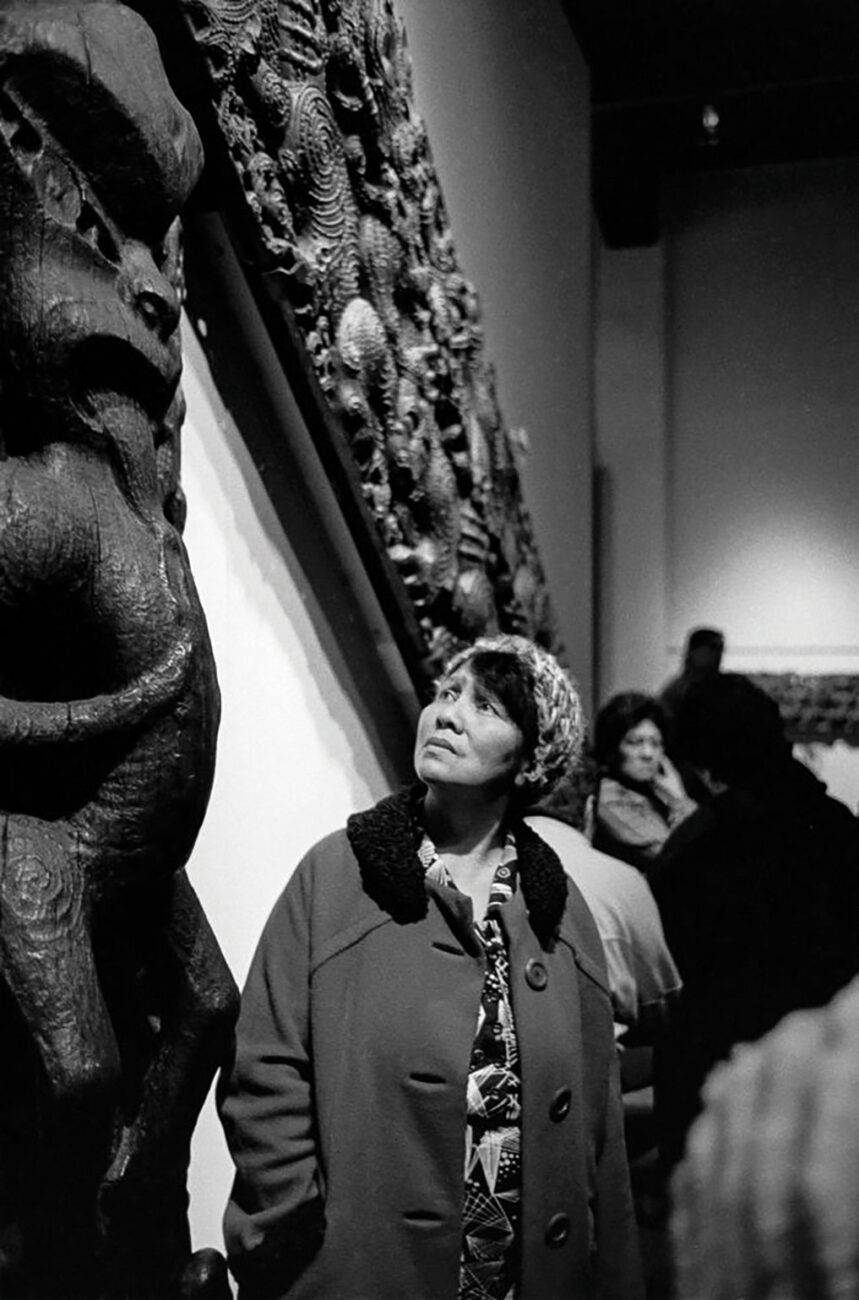 Even for a place as accustomed to novelty as New York, it was a thrilling moment. At dawn, the wail of a karanga sounded before the massive façade of the city’s Metropolitan Museum of Art. As the stirring pōwhiri unfolded, Taranaki kaumātua Sonny Waru gripped his carved tokotoko and, escorted by two taiaha-wielding warriors, led a 90-strong party of Māori elders, carvers, weavers, performers, and officials up the steps of the renowned institution.

Once traditional greetings had been exchanged with the American hosts, everyone made their way to the second floor where they encountered a waharoa from Rotorua. In the silence of the room, the imposing gateway of Pukeroa Pā, with its depiction of the warrior ancestor Tūtanekai, stood as if framing the entrance to another world. Beyond lay a treasure house of objects: a chief’s burial chest, an intricately carved canoe prow, a feeding funnel, a pendant of exquisitely patterned pīpīwharauroa greenstone, the haunting sculpture of a tribal god.

It was September 10, 1984, and Te Māori—a landmark exhibition that gathered 174 pieces dating to the late 19th century from institutional collections throughout New Zealand—was officially open for business. By the time its four-city run in the United States ended, Te Māori had exceeded the wildest hopes of its organisers, garnering unprecedented media coverage and breaking attendance records—more than 600,000 visitors in total. Following its overseas showing, the exhibition then toured New Zealand’s four main centres as Te Māori: Te Hokinga Mai—the return home.

The journey toward that headline-grabbing New York opening had been long and far from straightforward. Rejected in the early 1970s as too expensive, the proposal was successfully revived in 1979 with a new emphasis on Māori artworks rather than artefacts and with corporate backing. Māori were not easily won over. The Wall Street Journal would later quip that it was like “persuading the Pope to let Bernini’s Baldacchino out of St Peter’s”.

With a long history of cultural appropriation of taonga by outsiders, Māori for the first time became involved in how their artistic heritage was to be presented internationally.

An early decision was that tribal groups had the right to veto the use of their taonga. Māori helped draft copyright agreements, travelled as guardians, became exhibition guides, and assisted in protracted negotiations for the opening ceremony.

Te Māori marked an important stage in the Māori cultural renaissance then under way. By showing the artefacts as possessing a living, cultural dimension, it also forever changed the way museums and galleries interpreted and curated taonga Māori.

Te Papa curator Awhina Tamarapa recalled visiting the exhibition in Auckland and coming ‘face-to-face’ with an ancestor, Te Kauru o Te Rangi, represented as a pou tokomanawa (carved centre pole) of a meeting house that had once stood at Pakowhai near Napier. Te Kauru had fallen alongside his father, an uncle and a cousin at the battle of Te Pakake in 1824. All four found lasting form as pou tokomanawa. “The exhibition had a lasting and profound effect on me, and some of my whanaunga,” wrote Tamarapa on the 25th anniversary of Te Māori. “Enough to encourage us on a life-long journey learning about our heritage and genealogy.”

In a book on the exhibition, Hirini Moko Mead wrote of “rescuing” Māori art by taking it from the “limiting intellectual climate” of New Zealand to “the centre of the world of art”. If so, it was an OE that ended by enriching us all.