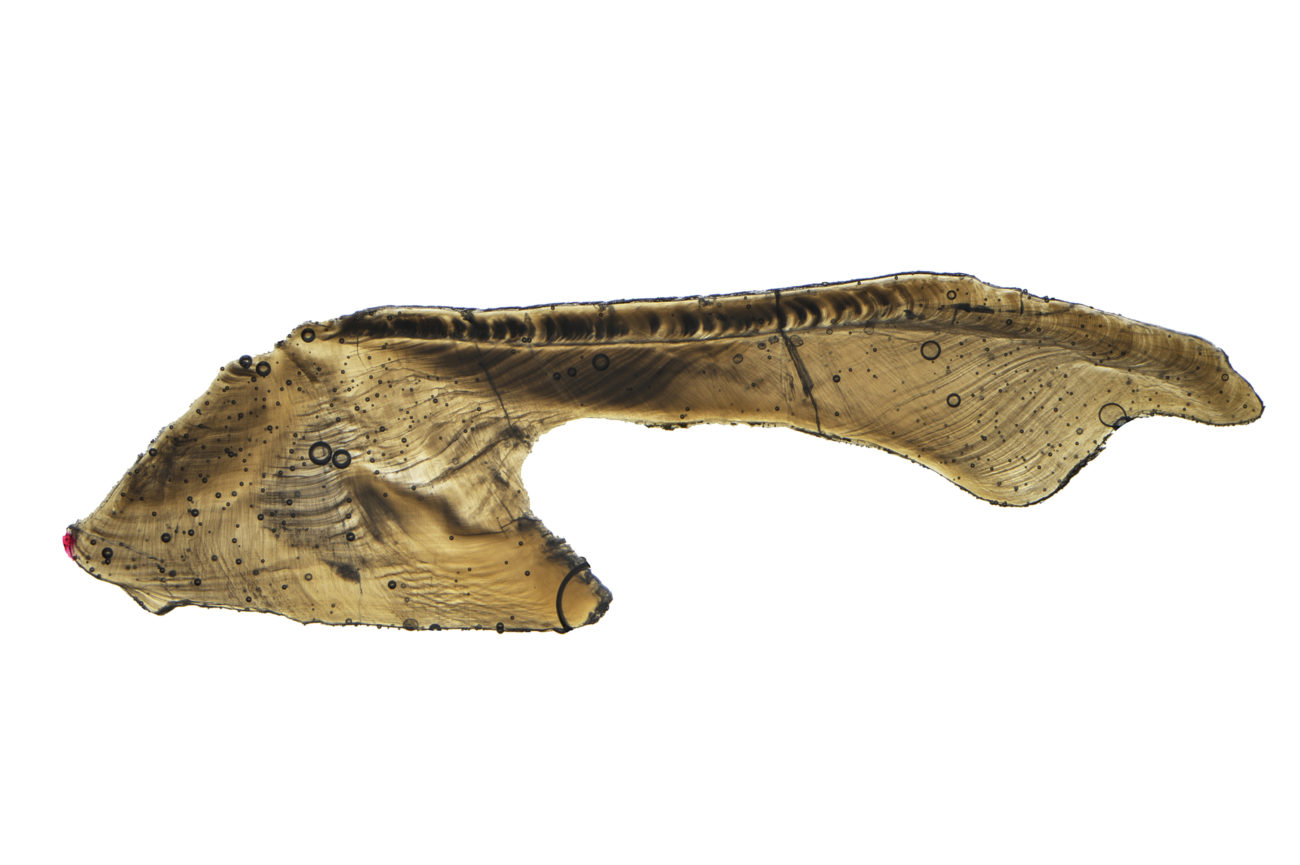 In the late 1700s, about the same time as the first Europeans came ashore in New Zealand, an orange roughy hatched in the Pacific Ocean. In 2015, it was caught by a trawl net in international waters on the Louisville Ridge, a chain of seamounts around 1500 kilometres east of Wellington.

A New Zealand commercial fishing boat hauled it up from its deep, dark home, and government observers extracted a pair of otoliths from inside its head.

Otoliths, meaning ‘ear stones’, function like an inner ear, helping fish with balance and orientation. Each one is a hard crystal of calcium carbonate, the same stuff as stalagmites. Like stalagmites, otoliths add layers each year a fish is alive. Because growth rates change throughout the year, scientists can use those layers to age the fish.

“When you cut the otolith in half, you see darkish and lightish bands, similar to tree rings,” says Peter Horn, a fish-ageing expert at the National Institute of Water and Atmospheric Research (NIWA).

When he picked up this one, he could see from the size that it was old, but wasn’t expecting it to top 200 years: the oldest orange roughy previously recorded in the New Zealand area was 180. To be sure, Horn did five separate counts, coming up with a variety of ages between 230 and 245.

As well as reading the concentric rings on an otolith, scientists check for higher levels of radiocarbon in certain rings. Radiocarbon was incorporated into the bodies of corals, fish and other marine species in the Pacific during nuclear testing that began in the 1950s, peaked in 1975, then fell away. Scientists match this to radiocarbon levels in individual rings.

When New Zealand began to fish orange roughy in the late 1970s, the fish were believed to live only 30 years, and were heavily exploited. By the end of the 1990s, it was clear that the fish grow incredibly slowly, reach maturity at about 30 and don’t breed every year.

By then, many stocks had collapsed and three of the eight New Zealand roughy fisheries were closed.

We now know that orange roughy are far and away the longest-lived commercial fish species. This fish isn’t even the oldest known orange roughy—two caught on the Cascade Seamount off Tasmania have been aged at 250 years.

A few other marine animals have been found to live past 200 years—bowhead whales, Greenland sharks, and an ocean quahog clam called Ming that made it to the age of 507—but these are a lot less likely to appear on restaurant menus.

Horn’s discovery was a “saddening surprise”, he says.

“I do have to admit that, yes, when I started to get some fish over 200, I was thinking, gosh, this thing had been tootling around in the ocean for two centuries, and suddenly it has a bad day and ends up on someone’s dinner plate.”