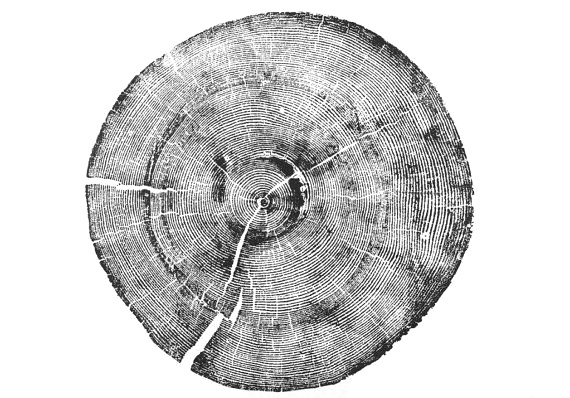 Every other week I go for a long run through bush close to our house in the Auckland suburb of Birkenhead. Much of it is dominated by towering macrocarpas, but as I scramble up the trail that runs along the edge of Duck Creek, the thin understorey of ponga becomes more dense and diverse, the natives become larger, and at the head of a valley in the comparatively new suburb of Chatswood, I find myself surrounded by giants.

Four kauri form a copse, rising like Apollo rockets from the undergrowth. I can get my arms about half way around the trunks of three of them, the other, not even close.

I lean back on a perfunctory wooden seat and stare upward, the trees tilting toward a common vanishing point high above. Tūī clatter and whirr through the canopy.

A core sample taken by University of Canterbury researcher Dave Norton suggests that the largest—1.7 metres in diameter—is about 475 years old. That’s not particularly old as large kauri go, but it pre-dates the arrival of Tasman by a century. It stood here throughout the tumultuous period of European settlement, and survived the kauri timber industry that enabled the construction of the colony. While its brethren were felled to provide the weatherboards and floors for my house, built some time before 1900, the Armed Constabulary were sacking Parihaka—a story of injustice barely mentioned in the public history of this country, but now recounted in detail in this issue.

But these trees can do better than stand mute in the presence of history; they are living barographs of natural events, as Kate Evans investigates in her feature ‘Buried Treasure’. Ancient kauri provide a continuous climate record back 4500 years, and a more disconnected record back to the limit of radiocarbon dating 60,000 years ago.

Ironically, the science benefits directly from the commercial extraction of swamp kauri, a resource being exported as ‘tabletops’ and ‘temple poles’ to international buyers, echoing the complex politics that has divided Northland. Is swamp kauri worth more in the ground or out of it? Are our remnant forests more valuable dead or alive? How do we begin to value these things when our sense of value is coloured so greatly by our perspective?

This is the same question posed by ecologist Jamie Steer, profiled on page 28, who is being accused of conservation heresy. His suggestion that introduced species are as valuable and relevant a part of our ecosystem as natives has raised the ire of those whose focus is on eradicating them. He’s not committing scientific treason, he says, simply forwarding an opinion that “opens up the conversation”.

For Andrew Judd, former mayor of Taranaki, learning about the events at Parihaka was life-changing. When he was elected, he had “no knowledge of the Treaty, no true knowledge of our past, no understanding or empathy towards Māori. I was wrong, I was ignorant and arrogant,” he said in a candid interview on RNZ recently.

New Zealanders pay lip service to the Treaty and are blind to its privilege, he said. “We do a haka at a rugby match, we sing the national anthem in both languages and think we’ve hit the mark . . . It’s archaic, and it has to change, because it’s not working.”

New perspective is powerful. It can recalibrate one’s sense of reality, even reset the course of a nation. Like Judd, facing history’s inconvenient truths, acknowledging nature’s evolving complexity, reconciling the relative values of temple poles and taonga are among those difficult processes that are tempting to ignore, but in addressing them we will start a new and enlightening conversation for everyone.