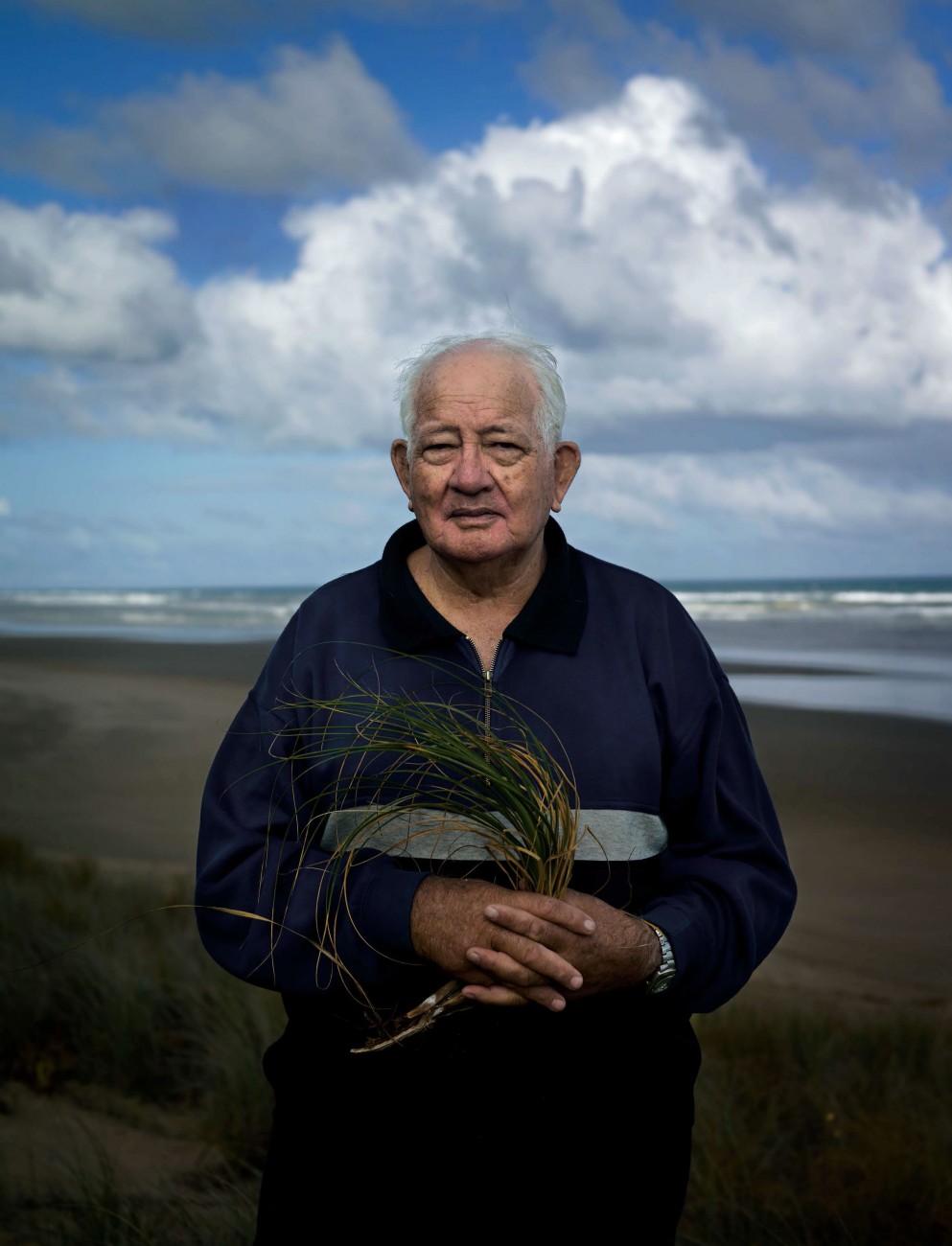 Within minutes of entering a classroom, James Te Tuhi has captivated his young audi­ence with tales of Pingao, how she was placed on the dunes by her father, Tangaroa, to nur­ture her whanau, the Toheroa. As the story un­folds, the Te Kopuru kaumatua reveals one of the mysteries of the toheroa’s life cycle: where and how the juveniles grow.

“The spats roam in the water for up to 21 days, then get into the huka, or foam, when the tide is coming in, and Tawhiri Matua blows the huka into the sand dunes. And who’s there to catch it? Pingao!” He goes on to describe the way Pingao incubates the microscopic young before they catch a ride back to the water’s edge on spinafex flowerheads or the wind. The children are enchanted with the tale, as was Te Tuhi, when his grandmother first told it to him 70 years ago.

Te Tuhi, a retired soldier and sought-after master carver, spends a lot of time passing on Maori lore and ecological wisdom to school­children. This is largely through the Te Roopu Whaka Oranga O Te Taha Moana Trust, a vol­untary group focused on replenishing stocks of toheroa (the endemic surf clam) alongside pingao, the golden sand sedge, on North­land’s coast. “They’re the future; they’re the ones who are going to have to look after our taonga,” he says.

Independent of the trust, he has spent much of the past 30 years voluntarily planting pingao and spinafex along Ripiro Beach near Dargaville and translocating toheroa, with his colleague Barry Searle, along much of the west coast of the upper North Island. Their work has led to a steady increase in toheroa numbers.

However, since the enactment of the Fore­shore and Seabed Act in 2004, this conserva­tion work has been put on hold. The traditional rights belonging to him as a kaitiaki, or guard­ian, aren’t legally recognised any more and Te Tuhi is waiting for the Ministry of Fisheries to grant him the authority to continue his efforts. “The numbers are dwindling, and meanwhile nothing is happening on the beach. Some­times I get real hoha [exasperated].”

As a young boy, Te Tuhi learned the lore of the coast from his grandmother, who lived at Ripiro Beach on hapu land that was also her mahinga kai, or food garden. “One of my jobs when I was a small fella was out at the beach fishing and learning about toheroa and the dunes from my grandmother. The grannies, the old ones, they had all the knowledge.”

As well as his work with children, Te Tuhi has written a book in Maori about the to­heroa, James Henare Te Tuhi: Te Kaitiaki To­heroa, which is used as a resource in schools alongside a book about his life and work.

Te Tuhi is deservedly known as Te Kai­tiaki Toheroa, the guardian of the toheroa. In 2003, he was granted an honorary master of applied science degree from the Auckland University of Technology, the same year he was awarded a Queen’s Service Medal for services to the community.

Found nowhere else in the world, toheroa are among the most protected species in New Zealand. Ripiro Beach has traditionally been the most abundant source of toheroa in Northland, with local canneries in operation until 1969. Restrictions on recreational gath­ering have been in place since 1932 and the last open day for the beach was in 1980. To­day, there is controlled customary take only, but poaching is rife.

Te Tuhi’s recommendation for the con­servation of toheroa is drawn from Maori custom, such as not eating toheroa that are too big. Excavation of middens in Northland shows that Maori traditionally left the bigger ones (over 100mm/4 inches) for breeding. “They have the biggest spat. It’s like a woman having a baby; the big babies have a better survival rate than the wee ones.” Conse­quently, to protect prime breeding stock, he would like to see customary take restricted to toheroa 70-90 mm long.

Te Tuhi doesn’t believe we will see another open day on Ripiro Beach, a day hundreds of people would descend with sacks and spades to dig for this traditional delicacy. But he would like to think toheroa will still be around for future generations. “For me, toheroa is more than a shellfish; it’s a taonga, a treasure.”