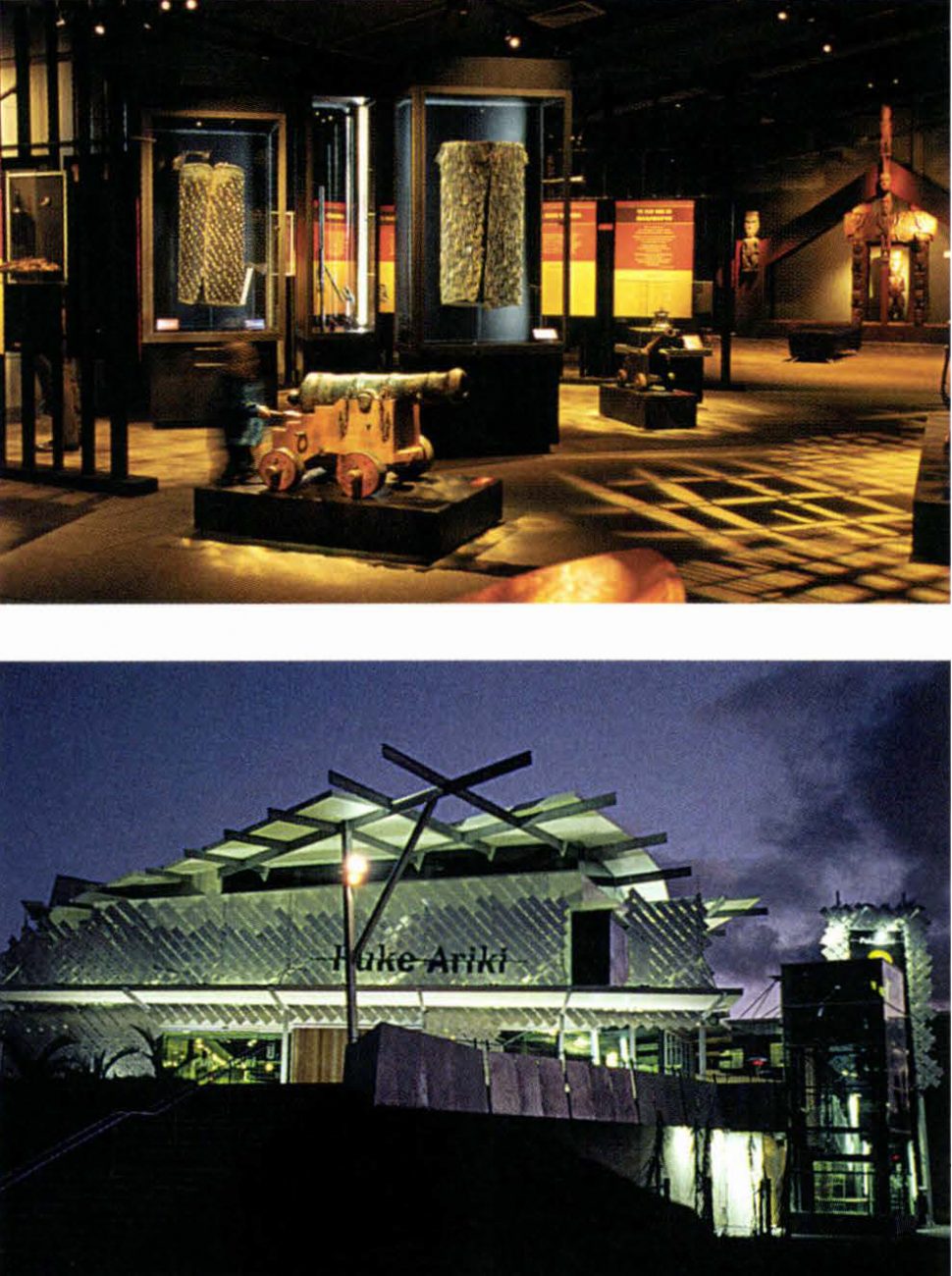 In June 2003, Puke Ariki, Taranaki’s new museum and library, opened its doors to an expectant public.

The building’s striking design had already excited considerable public comment—not all of it favourable—but in a place such as this it is the content that counts, and there is plenty on offer. Three main galleries deal with history, natural history and Maoridom, while a fourth is set aside for temporary exhibitions.

The Maori gallery, Te Takapou Whariki o Taranaki (The Sacred Woven Mat of Taranaki) offers the tangata whenua’s interpretation of the region’s past. Previously unpublished Maori writings are on display, alongside chronicles from eight local iwi. This account of Maori history is sometimes shocking, often poignant, and sure to spur debate.

Another section of the Maori gallery, Te Taenga Mai a Pakeha (The Arrival of the Pakeha), depicts the impact of colonisation, from the introduction of new implements to the musket’s devastating effect and the Crown’s acquisition of land.

“The Crown’s attempted purchase of the Pekapeka Block [in Waitara] began the settler government war against Maori in March 1860, and led to the land confiscation of 1865,” states one panel. “The Crown should never have taken the land. It claimed the confiscation was punishment for rebellion, but local hapu of Te Atiawa were simply defending their homes.” Though exonerated by the 1928 Sim Commission and the Waitangi Tribunal in 1996, Te Atiawa have had to wait until 2003 to obtain redress: the Taranaki District Council recently agreed in principal to return the Pekapeka Block to its original owners. Such politically sensitive issues are not something that every museum would be comfortable addressing.

In Taranaki Life, a gallery devoted to the full sweep of local history, the displays range from the region’s first European settlers in 1841 to the rise of dairy farming on owner-operated blocks and the mammoth computerised farming enterprises of today. A bright yellow-and-green hay-bale loader, the invention of local man Charlie Maxwell, takes pride of place alongside a walk-through cow shed, relics of military history and notable mountaineering achievements.

The history of the Taranaki oil industry—a passion of former museum director Ron Lambert—receives thorough treatment, as does the story of New Zealand’s first farm bike—the Mountain Goat—made commercially in Waitara in the 1960s and ’70s, and the development of the legendary Swanndri woollen garments, the manufacture of which only left the New Plymouth­Waitara area in the 1990s.

There are displays dedicated to sporting achievements—and not just on the rugby field. Famous axemen share the limelight, and one display features some of the first records of that peculiarly Antipodean sporting species, the marching girl.

In the natural history gallery, as well as moa and glass trees, snails and weta, and a multitude of organisms past and present, visitors can encounter a recreation of Carcharodon megalodon, the largest shark ever, that roamed the seas millions of years ago, and of Pseudodontornis, a 5 m-wingspan toothed bird whose remains have been found in cliffs near Hawera by local palaeontologist Joseph McKee. A giant fulgurite on display was formed when lightning struck some ironsand, causing it to fuse.

In keeping with modern museum practice, Taranaki’s story is related not just through displays but also with the help of interactive presentations and a 12 minute film in Puke Ariki’s high-tech theatre. Plinth-like structures beneath the screen project changing landscapes, while fibre-optic lighting embedded in the seating enhances the changing mood of each presentation.