If you attach four or more other atoms to a carbon atom, the resulting tetrahedron will contain two atoms that are mirror images of each other—a bit like your hands. But, like your hands, you cannot superimpose one upon the other. They’re the same, but their orientations are irreconcilable. They are, in the cafeteria chatter of molecular chemists, known as chiral, which is to say that they have a ‘handedness’, like golf clubs, shoes or scissors.

Lots of organic molecules have clockwise and counter-clockwise expressions. We know, because when we shine plane-polarised light on them, each form reflects it in different directions.

In 1953, chemists at the German drug company Chemie Grünenthal synthesised a carbon-based molecule, C13H10N2O4, otherwise known as thalidomide, then went looking for a disease it might cure. At first, they recommended it as a treatment for epilepsy, but patients reported no improvement. They did, however, enjoy a good night’s sleep. 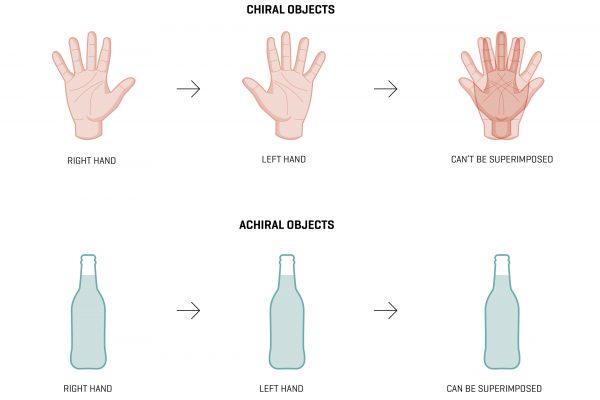 In 1957, thalidomide was released to the public, without requiring a doctor’s prescription, despite the fact that almost nothing was known about any pharmaceutical effects. It was sold in 46 countries—including New Zealand—under at least 37 brand names. Doctors prescribed it as a sedative and anti-nausea drug for pregnant women. By 1961, it was the best-selling sleeping pill in West Germany and Great Britain.

We know, and rue, the rest: it turned out that, when taken during the first trimester of pregnancy, thalidomide caused severe birth defects. It’s estimated that in Germany alone as many as 10,000 babies were born limbless, some with hands and feet attached directly to their torsos, others with just heads and a trunk. Still others had abnormal internal organs. Many were born to mothers who had taken a single dose of thalidomide.

It wasn’t until 1962 that regulators banned the drug internationally.

Nowadays, we know what went so tragically wrong inside the whirling atoms’ nest of that molecule. Thalidomide is chiral: it has a left- and a right-handed expression, and was sold as a 50/50 blend of each. The left-handed molecule was what alleviated morning sickness. The right-handed one was toxic, and claimed and compromised tens of thousands of lives.

Chirality is everywhere in nature, from molecules on up. Most biological amino acids are chiral, and they unfailingly twist the double helix of our DNA to the right. We think the world is symmetrical, bilateral, but so much of it is cack-handed: snails, for instance, carry shells that spiral left or right, depending on the individual. Or whether they’ve been poked with a stick.

In 2009, Japanese researchers discovered that, by prodding a developing snail embryo when it consisted of exactly eight cells, they could prompt the snail’s architecture—not only its shell, but the alignment of its internal organs as well—to go either left or right.

In this particular species, Lymnaea stagnalis, an offspring inherits its mother’s handedness through a gene the researchers christened ‘nodal’, but they found that they could reverse that genetically determined orientation by stimulus. However, when the study subject went on to have babies of its own, they reverted to their grandmother’s handedness, suggesting a single nodal gene might determine whether an individual is dextral (right-handed) or sinistral (left-handed).

This isn’t a surprise, considering it’s anatomically impossible for dextrals and sinistrals to mate: nothing lines up. All snails carry both male and female sex organs, so when lefties line up, so do their business ends. Same with right-handers. It stands to reason, then, that should a dextral try to get it on with a sinistral, well… things are out of whack. Left and right nodals never get mixed up. 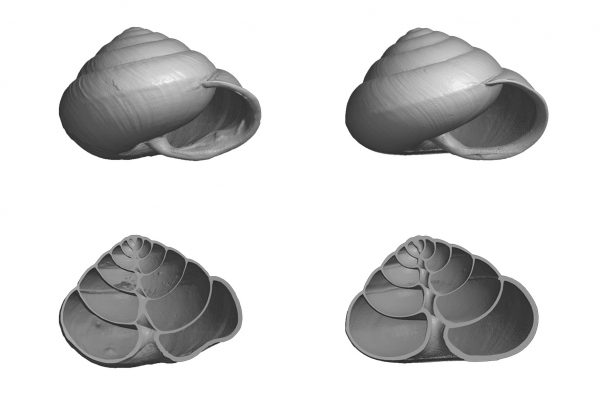 Among Asian satsuma snails, dextrals are by far the more common, which means that sinistral snails get way fewer chances to mate. They should be headed for evolution’s trash folder, but they’re not. Something is giving them an advantage.

Throughout Southeast Asia slither a family of snakes that like to eat slugs and snails, and because they usually encounter right-handed snails, they’ve evolved to attack from the left, going for the satsuma snail’s unprotected belly. So wedded to this tactic are the snakes that they have gone handed themselves—their mouthparts are now asymmetrical, with more fangs on the right.

By now, you’ve spotted the good news in all this for leftie snails. Not only are the snakes’ mouthparts now impossibly compromised, but they have committed behaviourally to always attacking from the left—a tactic wasted on the sinistrals.

This so-called directional asymmetry is more common than you might think, and on the braided rivers of Canterbury fossicks one of the world’s most celebrated eccentrics—our own wrybill plover. For millennia, wrybills fed by feeling for insects and larvae beneath rounded river stones, and their bill is now the only one on the planet permanently bent to one side. And it’s always the right-hand side, suggesting that the bird equivalent of the nodal gene is responsible. Like the snail-eating snakes, wrybills are committed to attacking only from the left.

In the northern hemisphere, a hefty orange finch, the crossbill, specialises in prising open pine cones with a bill that acts like a pair of tinsnips. The tips of its mandibles extend well past each other, but roughly half of crossbills have bills that cross left over right, and vice-versa. In this case, ecologists think this balance is held because the more birds in a population that feed from the right, the less food is available for those birds, with the equal and opposite selection applying to birds with a left-crossed bill.

Chirality may even be a force in the formation of minerals, some of which grow into dazzling crystal structures. We know almost nothing about what’s going on inside those minerals at the atomic level, but experiments at Newcastle University suggest chiral organic molecules are imparting direction—and spin—to a mineral’s atoms, handing on their left- or right-handed nature to the crystal.

After researchers imprinted the organic molecule hemifullerene onto a copper surface, they watched the copper atoms re-arrange themselves into a chiral pattern, pulled here and there by chemical bonds. “By understanding this process,” they concluded, “we can now force materials to behave in a certain way, using biological plans to create the shapes and structures that we want. This has huge potential in the fields of materials design and drug synthesis.”

Okay, but this time, let’s do the pharmaceutical studies first.