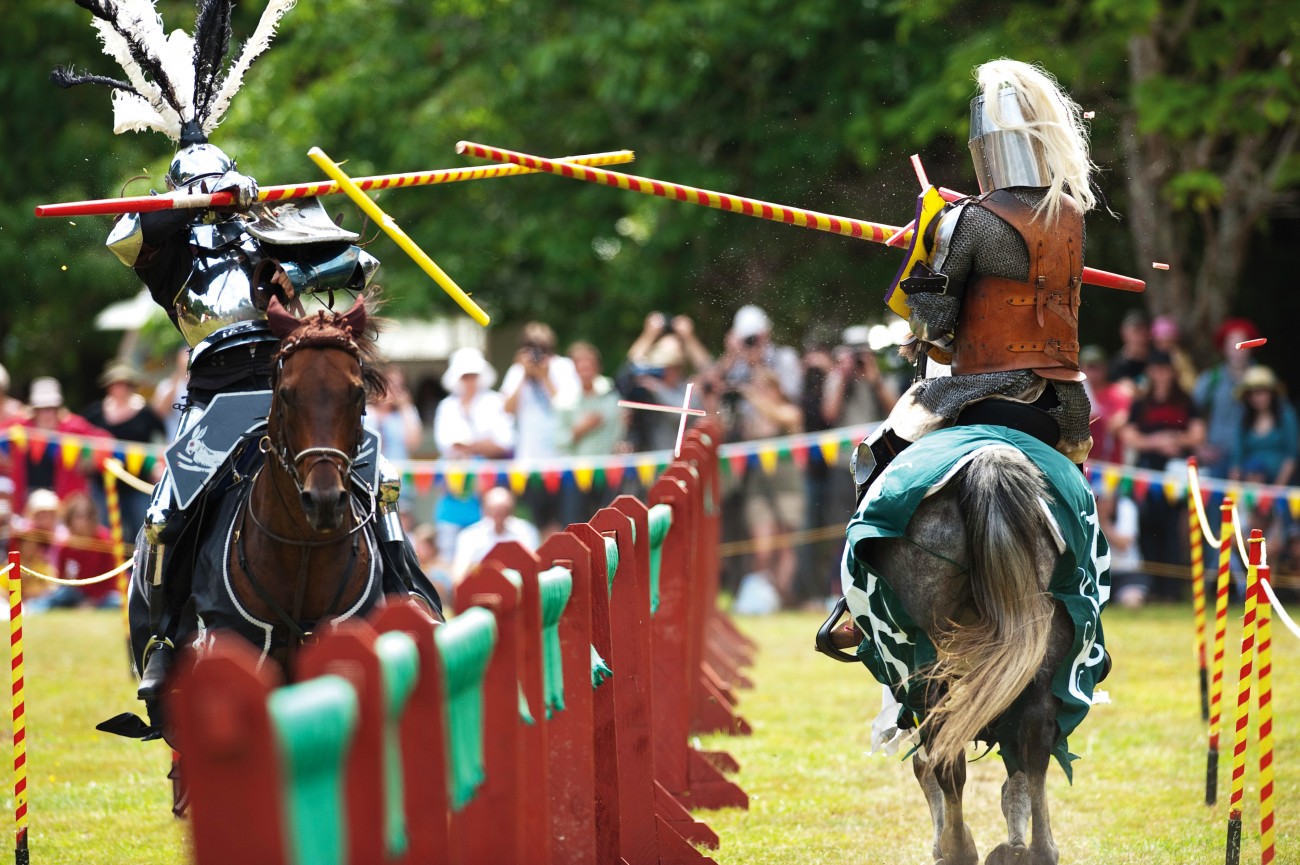 For somebody who likes to hit people with very big sticks, Fred Piraux is a nice guy. I wait while three attendants unbuckle him from his armour. It’s probably 29ºC here in Upper Hutt, and we’re well into the interview before he stops sweating. But he’s smiling from the get-go, and well he might; he’s so good at hitting people with sticks that he now leads this jousting tournament.

Piraux loves horses almost as much as he loves history, and it was just a matter of time before he found himself levelling a lance and goading a gallop. That, says the 41-year-old Belgian, a former mounted policeman, is the moment he knows whether he’s got a good horse under him.

When he travels halfway around the world to tournaments like this, the horses have likely spent the previous night in a nearby paddock, sorting out the pecking order. “Your horse might have had a bad night being bullied by another,” says Piraux, “and when you point him down the course, you soon find out which one it was.”

The quiet jouster spends his last few minutes running through a mental checklist: shield, reins, grip, seat, gloves… “You want the same drill every time. You don’t want anything different to distract you.”

Then he watches his opponent; the way he rides, his horse speed, his seat, his composure. There’s a very strict etiquette around jousting, but that’s not to say you can’t do a bit of sledging—Piraux likes to walk into the locker room and say, “OK, who’s going to join me in the final this afternoon?” Or pull a few tricks mid-joust—he will sometimes change his horse speed at the last moment, just to throw the other guy’s aim off.

In the old days, before first aid, jousting took two forms. War jousting was habitually lethal, which was, after all, the entire point. Sport jousting, on the other hand, looked pretty much the way Piraux conducts it here today—his lance has a balsa-wood tip, specially designed to break progressively. If he scores a good, solid hit, all three sections will break, clear evidence to the judges that he was on his mark. Every jouster carries a small shield, maybe 50 cm across. That’s where you aim. Hit your opponent anywhere else and you could lose points or even be censured. Hit his horse and you’re going home.

This tournament is being run by a crowd calling themselves The Order of the Boar, a miscellany of medievalists who like to dress up in very heavy, very expensive armour—a tailor-made jousting suit could set you back $20,000—and variously flail with axes, lunge with pikes, swing swords and generally regress for a day into a facsimile of their ancestry.

The order is, in large part, Callum Forbes. He’ll insist he’s merely a club captain, when in fact he’s the organiser, promoter, trainer and supplier of horses, sponsorship chaser, and the wellspring of energy and enthusiasm that’s made this tournament an international event. “A lot of people have no colour in their lives,” he tells me. “We give it to them.”

Forbes has spent years researching most things medieval and says the last quarter-century has seen a resurgence of re-enactments. He re-wrote the jousting style book in the eighties when he discovered we were doing it very wrong—what he calls a “TV-stunt” style. Nowadays, he tells me, the order practises “heavy-hitting” jousting, which can generate collisional forces of 6000 pounds per square inch. So people get hurt—a guy overseas recently died. Yet this order has an impressive safety record: no horse or rider has been seriously injured in a decade.

Forbes has six jousting horses in various stages of training at any time. He’s tried to breed a jousting temperament and given up. Nowadays, he says, he just “goes for the top of the paddock pecking order”. It takes about three years to train a horse to the point where he’s happy to run at one of his species, ignoring the clatter of ironmongery atop him, the fluttering pennants in his peripheral vision and the crash of lance on shield. And it’s the best riders who make the best jousters. He prefers his contestants to have done at least five years of dressage before they don armour. “Most of the dressage routines you see in the three-day equestrian events were once mounted combat moves,” he tells me. By way of a demonstration, a prancing grey in the ring next to us rears, front legs flailing, then kicks out with hind legs. “That’s for when you’re surrounded by foot soldiers,” Forbes explains. “The horse takes out the guys in front and behind, while you deal with the guys either side.”

This park is a portal. All around it, spectators are learning what just dawned on me: The Order of the Boar is showing us where we came from.

When he puts that helmet on, Fred Piraux shuts out the 21st century, and pays homage. “All my life, I’ve been a strong defender of tradition,” he says. “When we do this, we realise why our ancestors did things a certain way.” He holds up a horse’s bridle. “Look at this; it’s perfect. It hasn’t been changed in hundreds of years, because our forebears knew all there was to know about these things.

“The greatest respect we can pay them is to recreate their world and their ways—not try and improve on them.”

Not for Piraux the instant gratification, buy-it-online-next-day-delivery culture of modern life. “We must learn to respect time again. The time it takes to build a set of armour; the time it takes to train a horse. Time is what brought us here.”