It is by these or similar yardsticks that many of us gauge annual changes in our climate, and for comparison with years long past the best we can do is to resort to anecdotal records such as “the only year the creek dried up” or “the time the flood washed away the bridge.”

This summer’s weather might be remembered in a couple of decades as “that cold year when the shell­fish got poisoned by the toxic algal bloom,” but we seldom remark specifically on how changes at sea are related to general climate conditions.

For a country sur­rounded by so much sea (the nearest landmass, Australia, is 2000 km away), and one that has been so reliant on fishing, we are surprisingly igno­rant about sea weather. We have about 150 land weather stations that report daily records to the Meteorological Service, but very few stations have also recorded sea weather conditions for any length of time.

At the University of Auckland’s Marine Re­search Laboratory at Leigh, to complement measure­ments from a standard land weather station that overlooks the outer Hauraki Gulf, daily records are also made of “sea weather.” These include measurements of seawater temperature and salinity, the swell height and the standard Beaufort sea state measure of wave condi­tions. For the last ten years it has been possible to make useful comparisons of these inshore measure­ments with ocean surface temperature measurements made from weather satellites.

To meteorologists, the usefulness of data from particular weather stations is directly related to the length of time for which continuous records have been kept. A rule of thumb assessment sets 30 years as the period for which means need to have been calcu­lated and extremes identi­fied before meaningful trends can be established and useful predictions made.

At Leigh, land and sea climate have been moni­tored since 1967—just about long enough to meet a meteorologist’s criteria for respectability. After this time, the local analysts expect most monthly means to fall within about one standard deviation of the long term mean. However, they are not surprised when the odd extreme is exceeded—perhaps a record number of days on which rain fell in September, or the longest period of continuous wind in the westerly quarter—but after 25 years it would be unusual for the new records to greatly exceed the old. Last year has proved an exception.

Climate records at Leigh for 1992 were fairly characteristic of the whole Auckland and Northland region. The records for rainfall, wind run and solar radiation showed a typical mix of small variations above and below the 25-year average. However, the monthly average of maxi­mum daily air tempera­tures for 1992 was below the 25-year average in every month of the year This was also true for ground temperatures (taken at a depth of one metre) and for sea surface temperatures. That all of these temperat&es were below average right throughout the year was quite exceptional. But most remarkable was September’s figure for average sea surface tem­perature: the lowest ever recorded for any month.

In April and May, average daily maximum air temperatures were respec­tively 2.2° and 1.9°C below the 25-year average, and in October it was 1.5° below. One metre earth tempera­tures were similarly very low in April and May (both -1.0°C) and in September (-0.8°C).

Sea surface tempera­tures were particularly low in March and April (-1.7° and -2.0°C ) and in Sep­tember (-1.4°C). These figures point to a trend of land and air temperatures being influenced by the sea temperature conditions that preceded them—a relationship that has not been widely noted. More­over, the continued fall in sea temperatures to the record low in September occurred at a time of the year when sea temperature is normally starting to rise from the lows of winter.

The average annual range for sea surface temperatures at Leigh on Northland’s east coast is 6.6°C (from 14° in August to 20.6° in February). In the warm summer of 1973/ 74 the daily average for February rose to 2.3°C above the 25-year average for that month, while in the cold summer of 1982/ 83 it was 2.5°C below the average. The February average was also very low this summer: 1.5°C below the average.

It would be very helpful if the temperature abnor­malities could be corre­lated easily with other phenomena. Unfortu­nately, the roles of the various climatic and oceanographic conditions that may be involved are not easy to isolate. There is a surprising lack of correla­tion with salinity varia­tions which might be expected as different bodies of water flow into the region, but there is a very strong relationship between seawater tempera­tures and the Southern Oscillation Index (SOI).

The SOI is a semi-global measure of the fluctuations of the expected atmos­pheric pressure difference in tropical latitudes from the region of Indonesia, northwest of Australia, across to the eastern Pacific Ocean alongside South America. If the pressure in the east is lower, the SOI is said to be negative (“El Nifio”), and if the difference is substan­tial, there is considerable modification to weather patterns in the middle latitudes where New Zealand is situated. The most obvious feature is that westerly winds prevail while the El Milo condi­tion persists.

The summer of 1982/83 had the lowest SOI index since 1878, and it corre­sponded with low seawater temperatures and also with wind patterns that were predominantly westerly.

The ocean-wide domi­nance of westerly wind patterns has several important climatic conse­quences. It results in drought in eastern Australia and an easterly shift in regions affected by cyclones. The western Pacific, which includes the New Zealand region, therefore has less cyclonic weather, and central and eastern Pacific have more. On average, Tahiti only experiences one cyclone every five years, but during the 1982/83 summer it was hit by two substantial cyclones and several other weaker depression storms.

Every year during the tropical cyclone season (which lasts from Novem­ber through to April), New Zealand is usually buffeted by the winds of several cyclones. We seldom feel their full force, for by the time they reach our latitudes they have gener­ally started to lose inten­sity, or else we are only touched by their periph­eral winds. Only infre­quently does the eye of a hurricane pass right across part of the country, but those that do, like Carlotta, Bola and the storm that sank the Wahine, are all long remembered.

As well as causing havoc on land, cyclonic weather causes great disturbances at sea. In ordinary summers, territo­rial sea weather around northern New Zealand is characterised by storms that come from the north­east quarter. They may bring bodies of warmer  water down from the subtropics and thoroughly stir up and flush through the coastal waters.

In summers when the SOI is strongly negative (such as 1982/83 and 1992/ 93)—with little or no cyclonic disturbance, winds predominantly westerly and sea surface temperatures very cold for the season—blooms of phytoplankton develop. They persist for as long as the stirring and through-flushing cyclonic weather stays away, and may cause environmental problems. These depend on the concentrations of algae that grow and the particular species that thrive in the blooms.

In 1983, the dense bloom was mainly of the diatom Ceratulina, and the main problem arising from its presence was related simply to the massive quantities of biological material falling to the inshore sea bed, as billions of the single-celled plants came to the end of their short lives each day.

This material is the natural food of bottom-dwelling filter feeders such as sponges, bivalve shell­fish and fan worms, which normally have no difficulty processing all that settles from the surface. However, if the rain of biological material falls faster than it can be processed by those animals, it accumulates as a blanket that becomes mucilaginous with bacte­rial decay. As the bacteria use up all the oxygen and its gelatinous nature prevents reoxygenation, this layer then smothers the animals on the sea bed, many of which suffocate.

During the 1983 Northland algal bloom, the main commercial species affected were scallops and fish caught on long lines, but giant heart urchins, other shellfish, certain species of sponges, and kelp in moderately deep water were also killed by being smothered.

The kelp that died were mostly specimens growing towards the lower extent of their range, which is limited by light intensity. The blooming algae would have blocked out light to lower depths and, as the blooms persisted, the kelp plants were likely to have been in subthreshold levels of light for too long to survive. Moreover, the settlement of biological material over the kelp fronds in deep water and its persistence due to calm sea conditions allowed the development of fungal and bacterial growths which are thought to have damaged or killed the plants.

During the 1993 sum­mer episode there have also been deaths of kelp and sponges, but most of the attention has been on the presence of so-called “toxic algae” in the bloom. News reports would have us believe that the algal blooms were full of toxic algae, when in reality many species of phytoplankton bloom and the particular species of dinoflagellate algae that seem most likely to have caused some toxicity are just a fraction of the total.

Unfortunately for lovers of shellfish—and mussels in particular—it is known from overseas studies that after straining phytoplankton from the seawater, mussels select and swallow mainly the dinoflagellate algae from it. When the fraction of dinoflagellates in the phytoplankton is less than 3 per cent, it is not unusual for those algae to make up over 95 per cent of the stomach contents.

Of the many species of dinoflagellates in our seas, only a few are toxic, but in the notorious “red tide” events in other parts of the world it is always dinoflagellates that are the culprits. The three species of these algae that have been identified as the probable cause of paralytic shellfish poisoning in New Zealand have probably been in our waters for years. However, they have not been recorded because there has been very little plankton sampling from New Zealand waters, and none of it regular or systematic. It is therefore not known if the “toxic algae” have been present in significant quantities in the past.

This year’s sea climate conditions may have favoured them, and it may be that large-scale current fluctuations—which are known to occur around the northern tip of New Zealand—have brought a mix of nutrients to the surface, stimulating the growth of these algae. But whether the key factors are temperature and/or nutri­ents is unknown.

Now that the algae have appeared in significant numbers over a period of several months, it is likely that they will be identified in the plankton more regularly in subsequent summers. However, unless the monitoring of plankton, nutrients and sea condi­tions around our coastal waters is upgraded, it will not be possible to either understand why algal blooms form or to forecast their appearance. 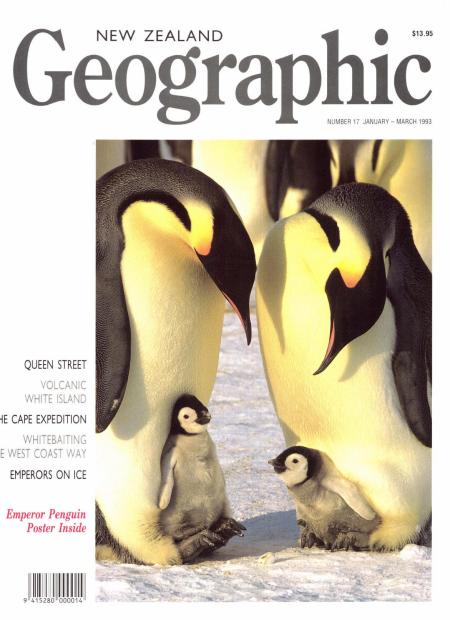